Around the Ivies: Tussle at the Top, Columbia Visits 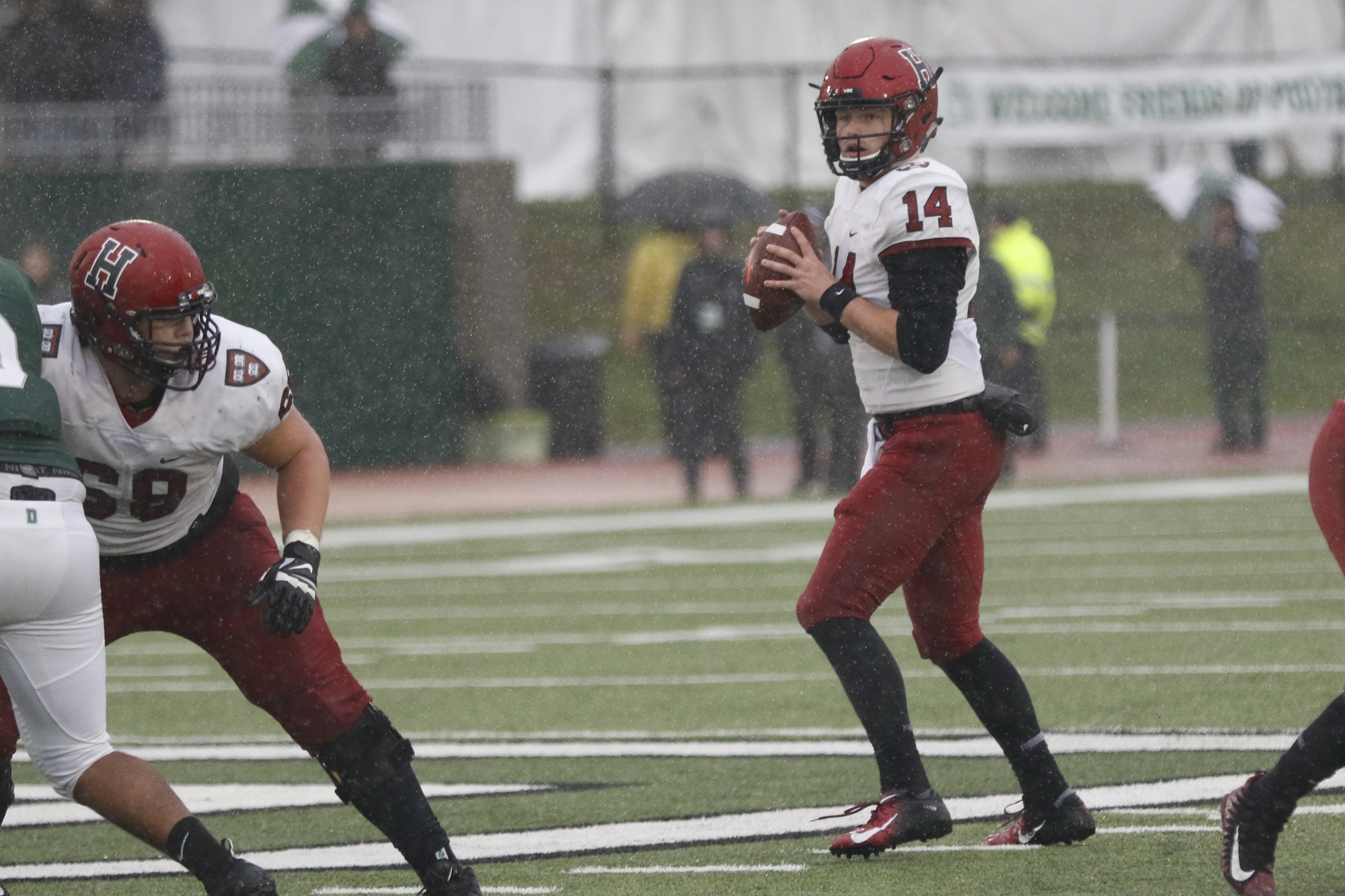 Tom Stewart looks for a target through the downpour last Saturday at Dartmouth. By Timothy R. O'Meara
By Jack Stockless, Crimson Staff Writer

Imagine for a moment that you’re driving into New Hampshire’s White Mountains. Palatable fall temperatures have plummeted into the mid-30s, and to make matters worse, freezing rain is in the forecast. The rain pelts the road and smacks the windshield.

You see taillights ahead, then hazard lights. “Why are these people being this cautious?” you wonder. “The roads won’t freeze at this temperature.”

Not two minutes later, you feel your wheels slip out from underneath you. Luckily you don’t skid off the road, but you realize you could just as easily have ended up in a roadside ditch.

I use this story to open up this week’s Around the Ivies because—if you’ve been paying any attention recently—my Ivy League football picks have belonged in a ditch for a couple of weeks now. At this point, they’re realistically buried there with no true hope of escape, especially since the season is almost over.

If you choose to read on, fasten your seatbelts, throw on your flashers, and stay far, far away from that roadside ditch.

According to The Daily Pennsylvanian, Penn alumnus and Tesla and SpaceX CEO Elon Musk has plans to open a high-speed transit tunnel in December. The tunnel will span approximately two miles and will be located near the SpaceX campus in Hawthorne, Calif.

On that note, I think Musk should consider coming back to the East Coast and opening up a transportation hub here. Sure, you can buy a train ticket to New York or plane ticket to Philadelphia, but there would be nothing quite like a 600-mph, $1 train ticket to Cornell or Dartmouth.

The Quakers won’t get to test Musk’s new system this weekend when they travel to western New York. Travel shouldn’t play much of a factor in this one, however.

No, that’s not a score coming from the women’s rugby team. Last week, Princeton delivered a smackdown on Cornell, a team that bested Harvard nearly a month ago. The Big Red fell behind, 45-0, at halftime and failed to make any progress chipping into the Tigers’ nine-touchdown and a field goal lead.

This is easily the biggest game of the season. Each team is undefeated overall and in league play, and they stand head and shoulders above the competition. Whichever squad prevails sets itself up nicely to take the conference championship.

With that said, this is also easily my biggest pick of the season. My reputation quite honestly lies in limbo. With a correct pick, I cement my legacy as one of the greatest prognosticators of Ivy League football. Of. All. Time. With a miss, however, my career goes down in flames, tarnished like the New York Yankees’ hopes of getting out of the first round against the Red Sox.

I think I was wrong about Brown.

My co-writer may still have hope, but I just don’t think this is the Bears’ year. At 0-4 in league play, they still have an outside shot at respectability, but after this weekend against Yale, that will likely prove unsalvageable. After picking Brown to win several games that resulted in opposing teams blowing out the Bears, I am officially DONE. I’m off the Brown bandwagon.

Owing to a trip to Fenway Park to take on Yale in just over two weeks, this is Harvard’s last true home game of the season. In keeping with the tradition of a team’s last contest on its home turf, the Crimson will celebrate its seniors before the game. However, this matchup coincides with First Year Family Weekend, a fitting time for freshmen to reflect on their first few months in Cambridge as well as the years ahead.

I joined The Crimson’s Sports staff my first semester on campus and began covering the football team during my sophomore fall. As I find myself on my way out, I’ll reflect on what I have learned by taking in the last three seasons of Ivy League football.

I have learned that Penn is trying to hold its own in the battle for NFL supremacy. While Harvard currently boasts the most former football players that have advanced to the NFL ranks — led by a healthy dose of FitzMagic — the Quakers are gaining with the addition of the GOAT himself Justin Watson.

I have learned nothing about Princeton’s campus, as I missed out on Harvard’s trip to New Jersey in 2016 and the two teams have clashed in Boston for the past two seasons. However, I have learned that its football team is pretty decent.

I have learned never to doubt Cornell. Instilled with a contempt for Ithaca, N.Y., ever since I attended my first Sports board meeting, I have grown to appreciate the Ivy League’s arctic outpost and its team’s apparent ability to erase any Harvard lead, no matter how large or how much time is left on the clock.

Finally, I have learned that the game looks a lot different up in the press box than it does down in the concrete bleachers of Harvard Stadium. I have witnessed celebrations in both places — once favorable, as I found myself amid a roaring crowd in the Crimson’s riveting 14-13 win over Dartmouth in 2015, and once not so favorable, as Yale radio broadcasters broke the 100-decibel mark when the Bulldogs upset Harvard in 2017. Each setting has its advantages: in one, I am able to root openly for my school’s team, and in the other I get free food and get to avoid shattered panes of glass raining down on my head (looking at you, Dartmouth).

I think that covers just about everything.