AROUND THE IVIES: It's a Dog Eat Bear Eat Tiger World 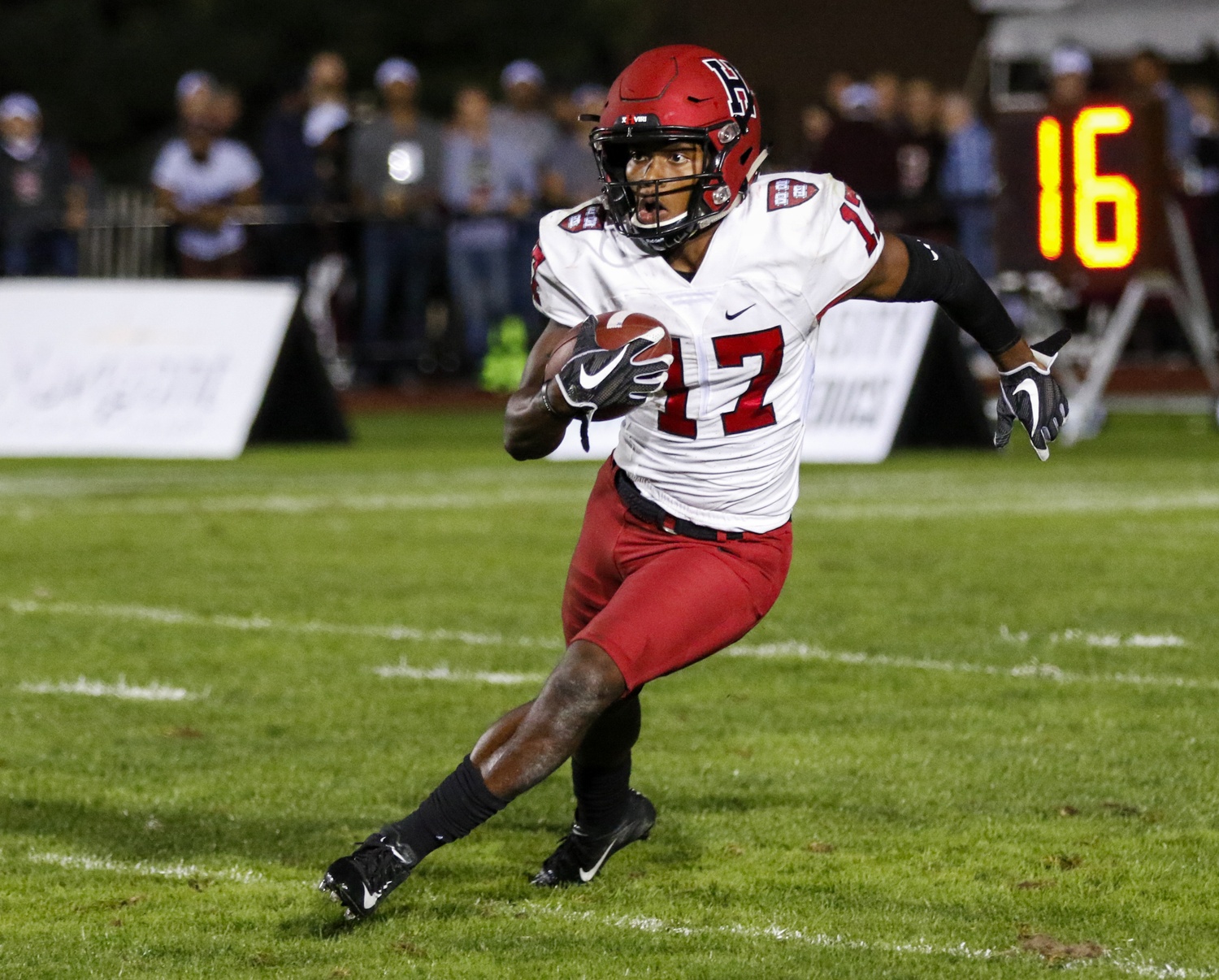 Junior Justice-Shelton Mosley has the fourth highest number of career receptions of any Harvard player ever, with 137. By Timothy R. O'Meara
By Cade Palmer

Imagine you’re a bulldog in the woods. You find a dead grizzly lying lifeless on the ground. You obviously take a bite, burying your snout in the flesh. Engrossed in your meal, you suddenly feel a twinge on your hind leg. You look to see what is biting you and it’s the bear. But also biting the bear is a lion. Biting the lion is a tiger. And the tiger is being bitten by two colors.

No this isn’t some demented version human centipede, it’s Ivy League football and everyone beating everyone is why no one actually knows who is better than who.

I, however, am tasked with the glorious burden of separating the wheat from the chaff, the strong from the weak, the losers from the losers. Thus I present to you, my picks:

Speaking of animals, recently, two rabid racoons were discovered at Princeton. But raccoons aren’t the only thing on the campus that are mad. Animal control should look into the football team as well.

The group looks good, salivating crazily at the mouth good. Two games, two wins. But not just two wins, two blowouts. The Tigers dropped 50 and 51 points on Butler and Monmouth, respectively. The opposing teams managed to score just 16 total points in return.
The Tiger’s offense is led by the senior quarterback John Lovett. The senior’s long blonde hair, which pokes out the back of the helmet and resembles Thor’s, might look ridiculous if he weren’t thundering each and every opponent.

If you haven’t been paying attention, you might have forgotten about Lovett. The senior served as tri-captain last season despite missing every game due to an offseason injury. Now Lovett is making his presence known and after taking the field against, Columbia is going to need some new pants. That’s a shame because it seems they won’t have anywhere to wash them.

Is this performance sustainable? Perhaps if you’re the god of thunder.

This is the Crimson’s second consecutive Friday night game and it’s starting to feel like we cover a high school squad. Harvard will field one more weekday matchup against Holy Cross before the rest take place on Saturday. The team actually does quite well under the lights of Harvard Stadium. It wasn’t until last year’s match against Princeton that the Crimson lost a contest at home, on a Friday night, under the lights.

But if any team can do it, it’s No. 20/22 Rhode Island. The squad is actually the highest ranked team Harvard has played since 2010 when the Crimson was downed the No. 18 Penn. Still, Harvard’s performances on both sides of the ball leave me inclined to favor it in this contest against an FCS ranked team. My gut says Crimson, and the last time I didn’t go with my gut, Yale got trashed by a mediocre Holy Cross team.

Everyone should go to at least one Brown football press conference in their life. Truly inspiring. The team which finished last in the Ivy League in the 2017 entered the press pool following the loss to Harvard — for lack of a better word — hyped. This not to say they were excited about losing. On the contrary, coach Phil Estes and junior co-captain Michael Hoecht were mad, but they believed their program would be great in the near future. I’m inclined to agree.

The way Hoecht’s eyes lit up when he talked about where the Bears went from that night, I wanted to strap on some pads and relive my high school glory days in a Brown uniform.

Also, as I’m quite fond of saying, Georgetown is really bad at football. Mark my words, Saturday will be the beginning of a Bears football dynasty.

Sacred Heart doubles as a religion. Ithaca is as close as to hell as you can get still breathing. I believe the outcome here was decided some time ago.

New Hampshire is a fraud.

So begins an op-ed by Henry Allen in the Washington Post. Among the better lines in his visceral description of the northern state.

“There is junk everywhere,” Allen writes. “There is an atmosphere that reminds you New Hampshirites drink more beer and distilled spirits per person than people in any other state.”

Housed in Hanover, this line more adequately describes the Dartmouth campus than any I have ever read. That then begs the question, does inebriation inhibit success on the football field? The Big Green’s record so far points to no. The team squared up against Holy Cross — Yale’s opening loss this season — and drummed the Crusaders by 20.

When Penn visits this cabin in the woods, it won’t escape with its win.

People ask us all the time, is Yale good?

When people tell you there are no stupid questions, they’re lying. This is a stupid question. For one, we go to Harvard. Of course the Bulldogs are terrible. For another, this is the Ivy League. No one is really sure if anyone is good or bad. All the teams are just equally the same.

Allow me to explain as I did in another one of my articles. By the last two weeks of the 2017 season, seven teams could win the Ancient Eight title. Yale was the team that ended up capturing that crown but lost to Dartmouth. Dartmouth lost to Harvard. Harvard lost to Princeton. Princeton lost to Dartmouth. Dartmouth lost also to Columbia, which also lost to Harvard, which also lost to Cornell, which beat Princeton but lost to Penn. There was only one team that did not participate in this mess was Brown, which lost to everybody.

What I’m saying is none of this matters. This article you just read? Worthless. The five minutes you spent thoroughly digesting my expert analyses? Wasted. You know why? Because I’m convinced every Ivy League match would be better predicted with a coin flip.