Around the Ivies: Home Sweet Home 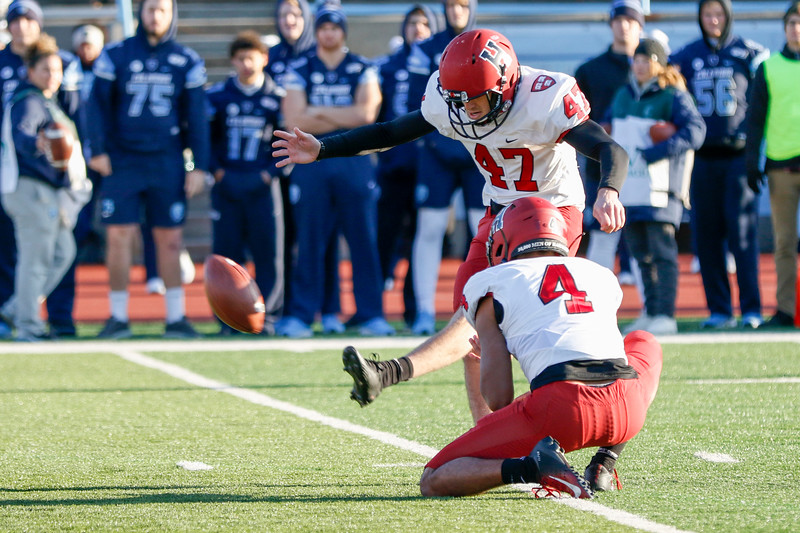 For seniors such as kicker Jake McIntyre, this week's game in Harvard Stadium will be one final homecoming. By Timothy R. O'Meara
By Joseph W. Minatel, Crimson Staff Writer

As a native of Louisville, Kentucky, there are a few things in life that can be replaced by no other. The sweet, sweet smell of lost bets at Churchill Downs on Derby day. The deafening sound of fireworks at Thunder Over Louisville until you care less after the age of 15. The recognizable rushing of brown water as guck runs down the Ohio River. The bright, gleaning orange barrels dotting the shoulder of Spaghetti Junction. The warm summer day that Dairy Kastle finally opens. Above all of these, however? Hearing that the University of Kentucky Wildcats men’s basketball team has been upset in Rupp Arena by the mighty Evansville Purple Aces. Music to the ears of every Louisvillian.

I will admit, I just wanted to mention this loss so that it is forever on the internet in yet another spot. However, I feel that my incoherent ramblings to start these columns are becoming more and more of a stretch, and they may take away my pen soon if I don’t relate it to Ivy League football in some fashion. While Evansville did pull off what Cornell will be trying this week in the form of an impossible upset, my musings of the Derby City came to mind in the week of Harvard’s final home game. For the last time, seniors will suit up and take the field at Harvard Stadium, the place they have called home for years. Before making the trek to that godforsaken, rundown city in Connecticut that does not deserve the admittedly great pizza it calls home in the season’s final week, Crimson seniors have one last go in Cambridge. At home. So as I sing one song for my Old Kentucky Home far away, half of the Ancient Eight’s seniors will sing one final song at their football homes. For this reason, and possibly having to do with the multiple lopsided matchups, I will be picking every single home team this week.

Princeton is no longer the top dog. Finally, for the first time since 2017, the Tigers have fallen. But Princeton lost this game in the neutral site of Yankee Stadium, not on their own field. While the westward crossing through the Holland Tunnel usually means disappointment for many, it will mean home for the Tigers. This week, the game will be played on the wrong side of the Hudson, in the friendly confines of New Jersey. The last time Princeton lost at home? At the hands of the visiting Yale, November 2017.

While slightly exciting, do not let this stuff spook you. The Bulldogs still have to play a very good team, and we no longer have time for this spookiness. The temperature has dropped too much, Christmas music is already coming out of my roommate’s speaker, and Waverly Sanitorium is closed. Like I said, this week is about home.

When I moved from Kentucky to Cambridge for college, I did not know what to expect. I did know one thing, however: it was going to be cold as hell. I packed up winter clothing in the blistering heat of August and set off for my new home. For some, this cold would be the most foreign of concepts. My roommate from Tunisia can definitely be counted among this group. When he left his original home in North Africa for Massachusetts, he buckled down for his first New England winter. I will never forget my fellow roommates and I bundling him up like Randy from A Christmas Story as we all embraced our new home.

In Columbia’s version of the Crimson, a reporter detailed how to survive the impending New York winter for those who never have. I commend that, and it really emphasizes the feeling of home. Plus, it was first on the website when I went digging for embarrassing stuff and it directly aligned with my anecdote and column theme, so I’ll throw them a bone against the Ivy League’s worst team.

I traveled a long way from Louisville to Cambridge. Both are still home. If I had to travel to Ithaca, however, I’m not sure if I could say the same. Traversing upstate New York and landing somewhere I’m assuming is just north of Greenland, it would be hard not to feel a little homesick. This week, a writer from Cornell’s version of the Crimson wrote an opinion with the title, “Going to Cornell Doesn’t Make You a Better Person.” I don’t have to read that article to believe the headline. Hope the Big Red aren’t too homesick in Hanover, the second-most desolate city in the Ivy League.

Penn recently caught some backlash for renaming its law school, as reported by Penn’s version of the Crimson. When the university received a record $125 million dollar donation, it renamed the law school after a donor. The students aren’t happy, and they have reason to be if they read my article. Fancy donor names betray tradition and homeliness. And that’s what this week is all about. Home.

Sorry Coach Cal, better luck next time away from Rupp.