Around the Ivies: Well Worth the Wait 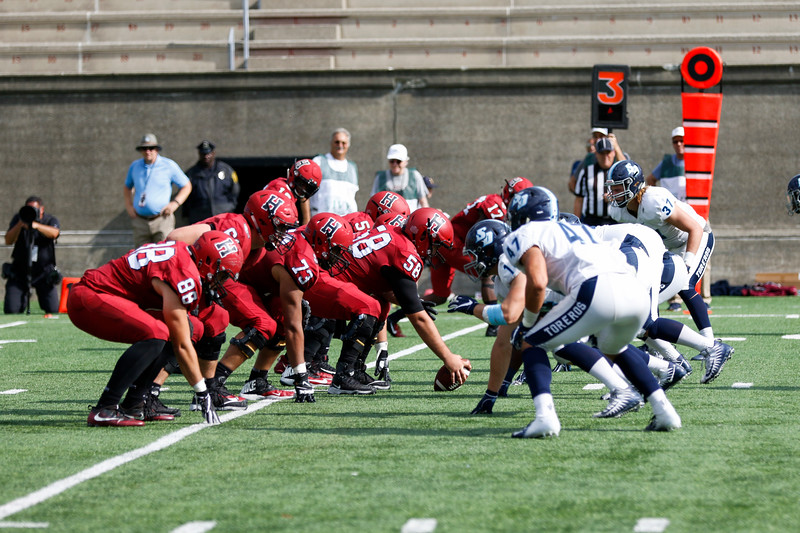 “Who’d Harvard play this week?” my grandfather asks me on the phone Sunday afternoon. We were on our weekly call just following the Colts game, where we examine Indy’s pros and cons from the contest, almost always settling upon some sort of outline for the rest of the year that allows for a playoff berth. “We haven’t started our football season yet, grandpa,” I respond for the third straight week. The elder Joseph Minatel still refuses to use the internet, and the Indianapolis Star doesn’t exactly cover the Ancient Eight week-to-week, so I am his go-to source for his newfound fandom of Crimson sports. “Well, when are they going to start? It’s football season!”

My namesake was right about one thing: it is indeed football season. Nearly a month after most schools in the country started their campaigns, the Ivy League football season is finally upon us. All eight teams will finally be in action, starting to play catch-up with a country that has thoroughly forgot about baseball and has spent its weekends glued to the couch in jerseys. In this magical time at the beginning of the season, every college and professional team that isn’t the Dolphins knows that their chances of glory are still ripe for the taking, no matter how promising or slim.

In an effort to guarantee that I’ll be covering conference games in the snow, the Ivy League traditionally starts its season in the third weekend of September, perfect for Dartmouth’s absurd academic calendar. It seems like they have about 80 days of school a year somehow, although I know I’d pray for a 12-week break from Hanover too.

Football, however, is only acceptable in large doses. With eight games on the slate this week, the Ancient Eight is sure to be busy. Let’s get this show on the road.

Since I mentioned my grandfather at the beginning, I have to start with his beloved Butler Bulldogs. His tutelage led to my back-to-back victories in the family bracket challenge in 2010 and 2011 thanks to my faith in Butler’s runner-up runs. Unfortunately, the games won’t be played in the holy land of Hinkle Fieldhouse and it isn’t March. Princeton hasn’t lost a game since 2017, including last season’s 50-7 drubbing of the Bulldogs, and the high-powered offense couldn’t be stopped by 11 Gordon Heywards. Forgive me grandpa.

For the second-straight season following its 2017 outright Ivy League title, Yale was tabbed as the preseason favorite to take home the conference’s crown. While this game won’t affect the standings in the slightest, the Bulldogs finally have a chance to prove that they weren’t mistakenly picked to take home the title (again) as they were last year. Last year’s Holy Cross matchup to kickoff Yale’s season went about the same as their 2018 campaign: unlimited opportunity and a high ceiling, followed by a disappointing collapse. The Bulldogs blew a 21-point lead in the first quarter and eventually lost 31-28 in overtime, as Crusaders’ kicker Derek Ng didn’t need any vowels to walk it off with a 45-yard game-winning field goal.

This year, Yale has recovered from its injury-plagued season and is returning an absurd 21 of 22 starters. Even if injuries strike again and dash its Ancient hopes, it can’t all happen at the Yale Bowl in the first week, right? Maybe it’s that preseason ranking jitters, but at least those yips are out of the Bulldogs’ system.

After an extensive 30-second Wikipedia search, it seems Marist College is the only institution of higher education that claims the mighty Red Fox as its mascot. It makes one wonder what Mike Leach would think of the crafty animal choice. Marist will host its neighbors from way upstate in Poughkeepsie, which the players from Ithaca will hopefully not mistake for the Big Apple.

Last season, Cornell avoided the cellar by at least winning a game (thanks Brown), but the Big Red played a few top teams well and won back-to-back victories over Harvard and Brown for the first time since 2000 and 1993, respectively. With this team returning 14 starters, I wouldn’t write them off so easily.

With Dorian well out of reach, Dartmouth will luckily escape the wilderness of New Hampshire and head to the tropical Jacksonville. The Big Green have quietly put together strong season after strong season, with its 38-12 overall record over the past five years is the best in the Ancient Eight. Only five points away from an outright league title, Dartmouth’s lone loss was a 14-9 slugfest against undefeated Princeton. The Big Green defense was second in the nation, allowing a remarkable 12 points per game. Dartmouth returns about half of its starters from both sides of the ball. As long as they don’t get sunburnt on what may be their first trip to the beach, the Big Green Defensive Machine™ should jump right back into the swing of things.

After years of bullying, Columbia looks like it has finally put together a solid program. Yes, this very sports board once claimed that Columbia was in fact the worst athletic program in the Ivies. At the time, in May of 2012, we were right. And we remained right for some years after that. However, with a 6-4 record in 2018, the Lions put together its second consecutive winning season. Columbia’s football team has not recorded this accomplishment since the 1962 season. You read that right. The last time Columbia took home back-to-back winning seasons was during the John F. Kennedy presidency. The moon was still unexplored. We didn’t even have a Super Bowl yet. In that same time period, they won exactly no games in six different seasons. I double, triple, and quadruple checked their own record books on this one, I promise it’s true.

It seems, however, that things have finally turned around for the Lions. This year, despite being ranked sixth overall, Columbia even received a first-place vote in the Ivy League preseason poll. With this type of momentum that they haven’t seen since the first James Bond film was released, I don’t see how Columbia can start off poorly.

I’m afraid I used up my mascot talk too early on the Red Foxes. I should’ve planned to wait for the Fightin’ Blue Hens. It really doesn’t get much better than that unless you’re a minor league baseball team (see: Montgomery Biscuits). This criminal lack of foresight doesn’t even come close to the nefarious behaviors covered in The Daily Pennsylvanian this past week, highlighted by a disorderly conduct citation caused by a thrown water bottle. Can’t make this stuff up.

This week, Penn should be more worried about the pigskin being slung around instead of water bottles. We all know that the quarterbacking talent coming out of Delaware has proven elite on the next level.

The Bears brought in their former star quarterback and Princeton offensive coordinator James Perry as head coach, boding well for the offense over the entire year for a team returning all but one offensive starter. Perry’s previous job? Head coach of Bryant University. Maybe he’ll use some firsthand knowledge of the Bulldogs that even Belichick couldn’t steal.

Here we are. The start of the season. It’s a long trip to the land of Ron Burgundy. Harvard may only be returning half of its starters. But the Crimson is coming off of a three-game winning streak. All four losses from last season came by one possession or less. Andrew Yang just spoke on campus. Things are looking up.

Harvard started last season with a resounding 36-14 victory in the first half of its home-and-home series with the Toreros. Junior running backs Aaron Shampklin and Devin Darrington combined for a mind-boggling 266 yards and five touchdowns on the ground last time around. Even half of that is usually enough.