History's One and Only Crimson Dance Team

In March 1946, Harvard was one of eight teams to enter the NCAA Tournament. It hasn’t been back since 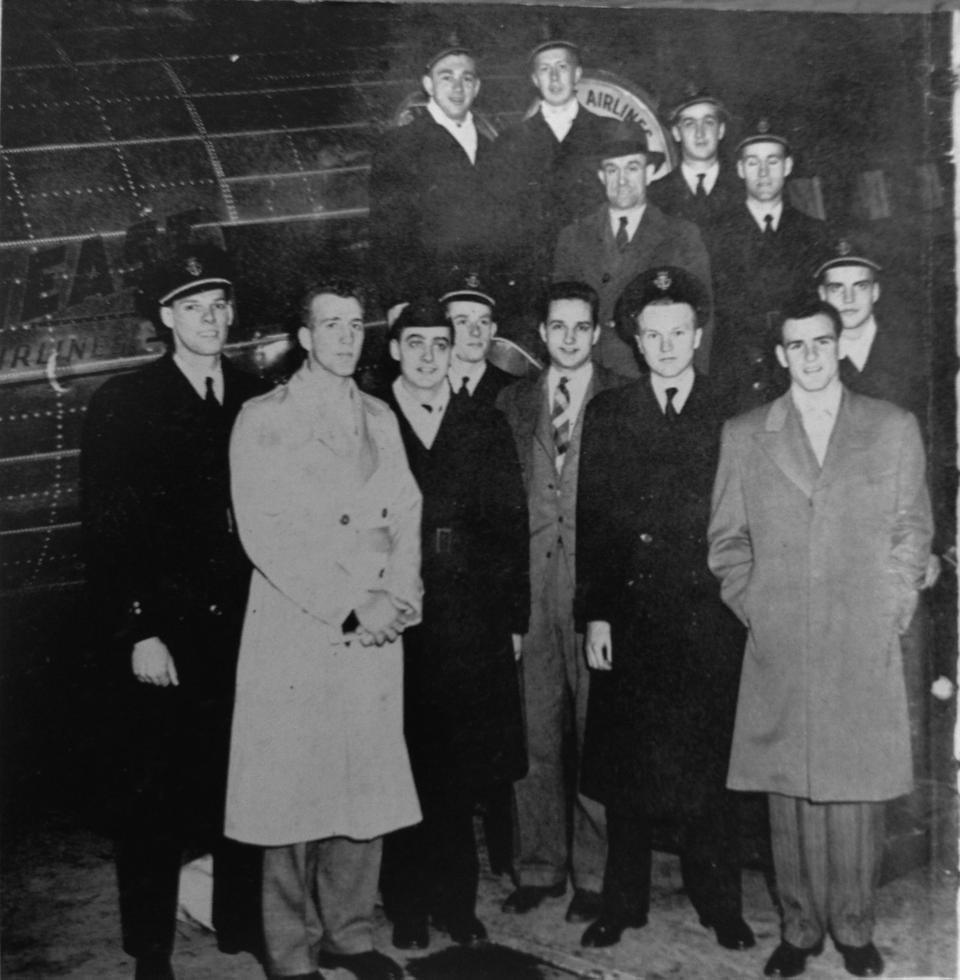 Harvard reached its first NCAA Tournament in March 1946 and would not return to the Big Dance until 2012.
By Alexander Koenig, Crimson Staff Writer

Sixty-six years ago, the Harvard men’s basketball team was selected to represent New England in the NCAA Tournament at Madison Square Garden.

Though the tournament now welcomes 68 teams as opposed to eight, Harvard has never returned to the promised land of March Madness.

The journey to the top for the 1946 Crimson was a remarkable one, the likes of which may never be seen again in college basketball.

It involved a Buckeye, two Celtics, and a world war. Its main protagonists were named Floyd, Wyndol, and Saul, and it came during a time when the NBA didn’t yet exist.

With the draft forcing many of the country’s best minds and talents into enlistment, the U.S. Navy initiated the V-12 Navy College Training Program, enrolling more than 125,000 enlistees in universities nationwide.

The reasoning behind the program was that these young men could better serve the nation as educated officers than as enlisted men. Naturally, there were fringe benefits for the armed forces as well. A look at the athletic histories of the Naval Academy at Annapolis and the USMA at West Point exemplifies that point: Army won the national championship in football in 1944 and 1945 (World War II), and finished in the top 10 in the early ’50s (during the Korean War). Navy similarly dominated on the gridiron during World War II and Vietnam.

With the Crimson struggling on the hardwood, avid basketball fan and Harvard Navy ROTC Commander Walter Mundorf saw an opportunity. Rumor has it that Mundorf, using his connections across the V-12 program, began a massive recruiting program in which he petitioned for the best available V-12 basketball talents to be transferred to Cambridge, Mass.

The results were incredible. Wyndol Gray, a first-team All-American from Bowling Green, brought his 22.3 points per game to the northeast and became, according to a 1946 Boston Globe article, “the most phenomenal shooter to play in New England and surely the best to ever wear a Harvard uniform.”

Paul W. Champion, a 24 year-old veteran of the War in the Pacific, co-captained the Crimson with Gray. Four of the five starters were V-12 recruits of Mundorf’s and the fifth, Saul Mariaschin ’47, transferred of his own accord from Syracuse after returning from the war.

THE MAN BEHIND THE MADNESS

It was a long and winding road that brought Crimson coach Floyd Stahl to the sideline in Madison Square Garden on March 21, 1946.

He began his coaching career at the Ohio State University as the head baseball coach and offensive-line coach for the football team.

He then was hired by Harvard in 1939 to coach baseball, a position he held for seven years with mixed results, finishing with a career record of 54-69.

In 1943, he agreed to take on the Crimson basketball team, despite having no experience coaching the sport.

Stahl’s learning on the job and hands-off approach led to the aforementioned struggles his first few seasons at the helm. But, according to the Harvard Class Album of 1946, Stahl was perfectly suited for the skilled and experienced ’46 team.

“These boys had played a lot of ball at other schools and knew the game backwards,” the album says. “There was little a coach could teach them and this was fine for Stahl who had always let his players do a great deal of their own coaching anyway. All they needed was to practice and play together to become a great team.”

And become great they did. The Crimson tore through the season, going 19-1 behind an All-American campaign from Gray and an all-conference performance by Mariaschin.

Its lone loss came to Holy Cross, a game in which Mariaschin was injured early in the first half and the man he would have been guarding scored a last minute lay-up to defeat Harvard by two.

The Crimson’s dominance of New England was well understood and appreciated by locals. With no professional game existing—the NBA would be created in the summer of 1946—Harvard was the toast of the town, and a late-season matchup with Yale was played in front of a sold-out crowd in the Boston Arena.

“Our team at Harvard in 1945-46 was the very best in its history,” Mariaschin said at his class’ 25th Anniversary. “That athletic accomplishment was very significant to me and everyone on the team.”

Once the Crimson graduated from beating up on future Ivy League teams— the Ancient Eight did not exist until 1954—it boarded a bus for the Big Apple. The tournament format differed greatly from today’s, with only eight teams being invited to participate. Harvard, NYU, Ohio State and North Carolina represented the East, while Baylor, California, Colorado and eventual-champion Oklahoma A&M (now Oklahoma State) represented the West.

Perhaps due to the shine of the spotlight or the more talented competition, the Crimson played a sloppy two games, finishing last in the East bracket and returning to Cambridge winless.

“I will never forget those games at the Garden,” guard John W. Gantt ’47 said in his 25th Anniversary Report. “As the years have passed and my athletic career is now behind me, these are the memories that will always stick with me.”

After bowing out in New York, Gray left Harvard and was drafted in the first-ever NBA draft, joining the Boston Celtics. He played one season there, averaging 6.5 points per game, before bouncing around with the St. Louis Bombers and Providence Steamrollers. Gray passed away in 1994, but not before being inducted into the Bowling Green Hall of Fame.

Despite losing Gray and the other V-12 players, Mariaschin returned to captain the 1946-47 team to a 16-9 season, a mark the Crimson would not reach again until 1957-58. After graduation Mariaschin became the first Harvard grad to be drafted by an NBA team (Gray did not graduate), playing two seasons with the Celtics and averaging 7.7 points per game.

Despite being offered a long-term contract, Mariaschin decided to leave basketball, change his last name to Marsch, and move out west to California. Had he signed the deal, he would have been under contract through 1951. In 1950, the Celtics hired Red Auerbach as coach, and Auerbach would lead the Celtics to 16 NBA championships.

Mariaschin was inducted into the Harvard Varsity Club Hall of Fame in 1980.

Ed Smith ’53 and Jeremy Lin ‘10 are the only Harvard graduates since Mariaschin to play in an NBA game.

In the 65 years since the Crimson’s last NCAA appearance, it has had just 16 winning seasons. Last year, Harvard was a Douglas Davis jumper away from breaking the NCAA drought. Despite there being more than half a century of frustration looming over the program, Crimson coach Tommy Amaker doesn’t think the pressure of the ’46 campaign effects today’s players.

“They’re anywhere from 18 to 22 [years old], and they’re still trying to figure out Expos, Psych class, Economics, and represent Harvard and play games here,” Amaker said. “I doubt very seriously that it has an impact on them. I’m sure they know that it’s been a long time since [Harvard has] been able to do that. They’re aware of that, they’ve been told that many times.”

But Harvard is a place very much dedicated to tradition, a place that just celebrated its 375th birthday and where there are no classes before 9 a.m. to accommodate students attending chapel seven days a week. As Amaker looks to establish his own unconventional basketball tradition, he need only look to the Crimson’s past for inspiration.

“I was in contact with one of the players from that team,” Amaker said. “That was a neat thing, a neat experience for me. It was great to hear how excited he was with where we’re going as a program. The heights we’ve reached and hope to reach.”