The Best Days May Be Ahead For Harvard Basketball 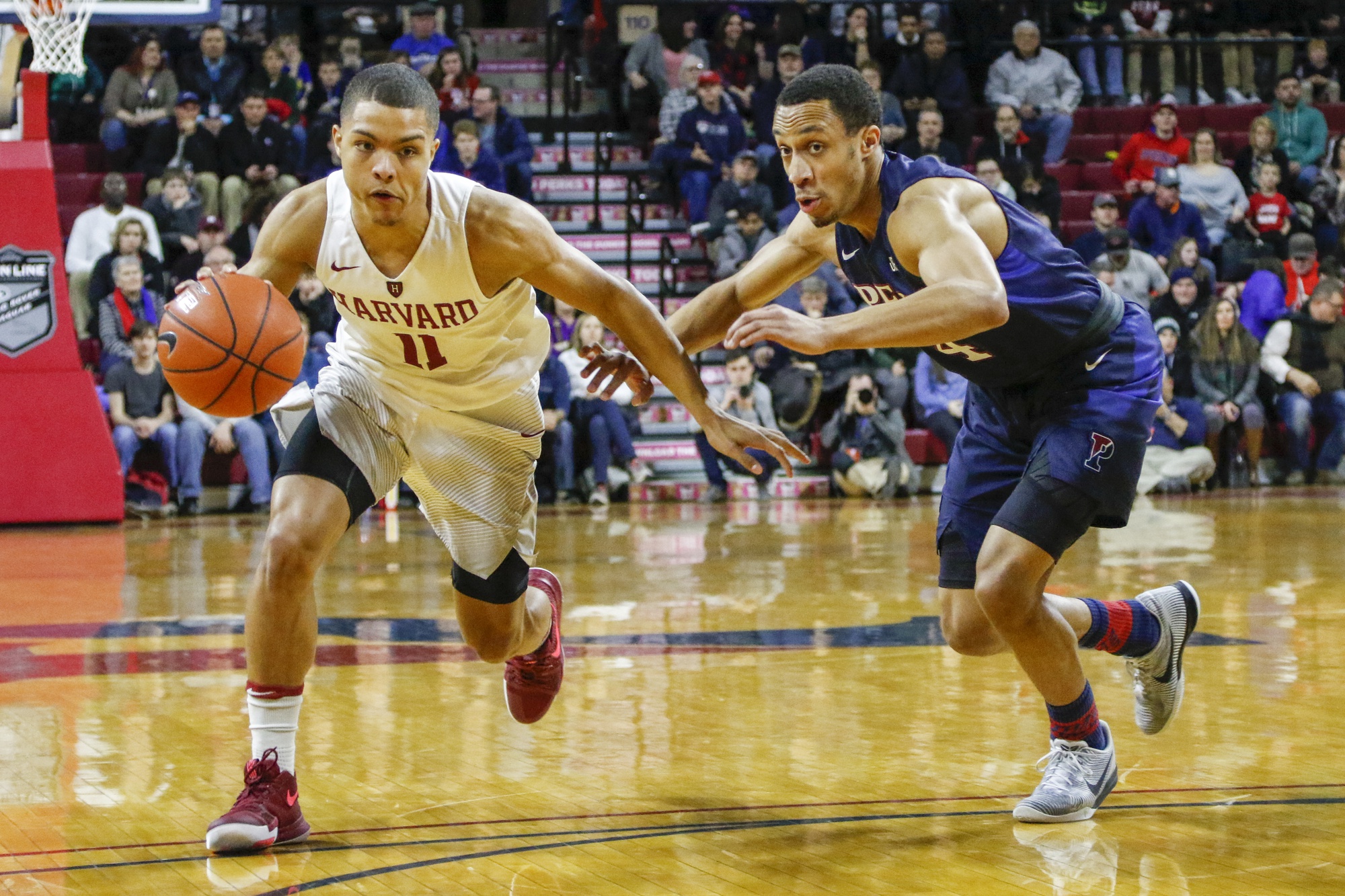 Freshman guard Bryce Aiken drives in Harvard’s Mar. 4 loss against Penn. Aiken will have an increased load next year due to the departure of senior guard Siyani Chambers as the Crimson hope for the best. By Timothy R. O'Meara
By Theresa C. Hebert, Crimson Staff Writer

For the fifth time in Ivy play, the Crimson fell in the final moments of the game. But remember, Harvard had only five losses against Ancient Eight opponents (four in the regular season, and the Ivy Tournament first round loss). In those five losses, the margin of defeat was a combined total of 13 points.

For comparison, in the second half of conference play, every Ivy team, except Harvard, lost to Princeton by more than 13 points in just one game.

The team’s largest gap in an Ivy loss was four points to the Tigers in the last weekend of regular season play, and two points of the final difference came on Princeton free throws as the Crimson tried to extend the game when it fell behind by two on an Amir Bell floater.

After each of these losses, myself and my fellow Crimson reporters were tasked with interviewing coach Amaker and an array of players, trying to dissect what had just happened on the court.

In no circumstance was this more challenging than the Ivy Tournament, as seniors Siyani Chambers and Zena Edosomwan had to discuss the loss to the Bulldogs just moments after their collegiate basketball careers had ended.

But despite the pain of the season ending in such devastating fashion, neither hesitated to speak of the future of Harvard basketball. While the tandem and their fellow classmates are some of the last remaining ties to the Crimson’s peak—being the only players on the roster for Harvard’s NCAA Tournament victories against New Mexico and Cincinnati—the program is taking steps forward to be in contention for March Madness for years to come.

“Time obviously flies and it’s been a privilege to play for coach Amaker and be a student-athlete at Harvard University and compete in the Ivy League,” Edosomwan said. “It’s such a tough league. I’m really proud of this program and the direction it’s going.”

This isn’t to minimize the losses of Chambers and Edosomwan. While both have made significant impacts on the court, their leadership has been something that Amaker has pointed to time and time again before every big game.

The story of the 2016-2017 season was Harvard’s revered freshman class—a top-ten recruiting class, an eventual Ivy League Rookie of the Year in guard Bryce Aiken, and an finalized starting roster that included four rookies and Chambers. With the 10th youngest team in the NCAA according to KenPom ratings, however, Amaker relied on his veterans to be vocal on and off the court to guide the underclassmen through the transition to college basketball.

But, for the first time since the 2014-2015 season, Amaker won’t have the significant hurdle next season of working with a core of brand new players. The Crimson currently has three recruits set to join the squad in 2017, but it returns 73 percent of its points and 87 percent of its minutes from this season.

Thirteen of its 20 players on the current roster are freshmen and sophomores.

In each of the past two years, Amaker has played at least two freshmen in every starting lineup.

Though we can’t yet know for sure who will get the nod next season, the team will have an easier time hitting the ground running with four returning starters in Aiken, Seth Towns, Chris Lewis, and Justin Bassey.

“This young group, they have the potential to be special, but it’s going to take a lot, as I’m sure they recognize more now than they did a year ago,” Amaker said.

In Aiken, we saw the possibilities already this season. From his first game—in which he scored 21 points against Stanford in the Pac-12 China Game—the spark he provided in the backcourt was immediately evident.

While there were ups and downs throughout the year, Aiken was the main reason why the Harvard-Yale Ivy Tournament battle was close. The rookie scored 28 points (20 of which came in the second half). But without Chambers next season, Aiken will need to adjust his game in order to maintain the level of production that he saw this season.

With Chambers at the helm, Aiken could focus on creating his shot while Chambers took on more of the “quarterback” role as Amaker describes it. Without Chambers, Aiken will have to blend the two roles more cohesively.

But as his performance in the Ivy Tournament showed, Aiken has serious leadership potential.

Aiken led the team in scoring, but Seth Towns was right behind him. Notching 12.3 points per game, Towns was effective all over the offensive end of the floor. The Columbus, Ohio native shot just under 40 percent from behind the arc and 43 percent overall, posing a matchup problem for defenses as he stands at 6’5’’.

Improved defense will be the key for Towns as he found himself fluctuating from being a wing to being the second big man on the floor, tasked with guarding different types of players depending on who he was with on the floor now that Edosomwan will be gone.

The highest ranked prospect of the rookie class coming into the year was Chris Lewis, and though at times he certainly reminded crowds that he was a rookie, he excelled offensively in being consistent around the rim, finishing the year with the highest field goal percentage in the Ancient Eight at 65.2 percent. Lewis couldn’t keep up with Edosomwan in the rebound category, but he certainly is farther along than Edosomwan was as a rookie, making the team optimistic for elevated performance during his maturation process.

Justin Bassey didn’t get the accolades of Aiken, Towns, and Lewis, but he was a force for the Crimson in the second half of the season and was a key defensive presence down the stretch, typically tasked with guarding the opposing team’s best perimeter player. Though he averaged just 18 minutes per game in the heart of the nonconference schedule in December, Bassey notched over 30 minutes a game in February and March with the season on the line.

Since I began covering the team in the spring of 2015, each season has ended with more question marks than answers.

How will Harvard rebound from the graduation of Wesley Saunders?

Will Siyani Chambers be able to return to full strength following an ACL tear?

Can the freshmen live up to expectations?

While there are no certainties about the 2017-2018 campaign just yet, the way the 2016-2017 season ended in such devastating fashion has not diminished the positive tone that the Crimson takes going into the offseason.

“I think there’s an amazing amount of optimism and anticipation for one year, next year,” Amaker said. “I think we feel like we’re in a place where there’s an amazing amount of forward thinking and optimism and belief that the good days are still ahead of us...maybe even our best days could be ahead of us. That’s saying a lot given what some of our past days have been. But I do think that it’s fair to think like that and to hope for that and certainly that’s the feeling we have around our program.”