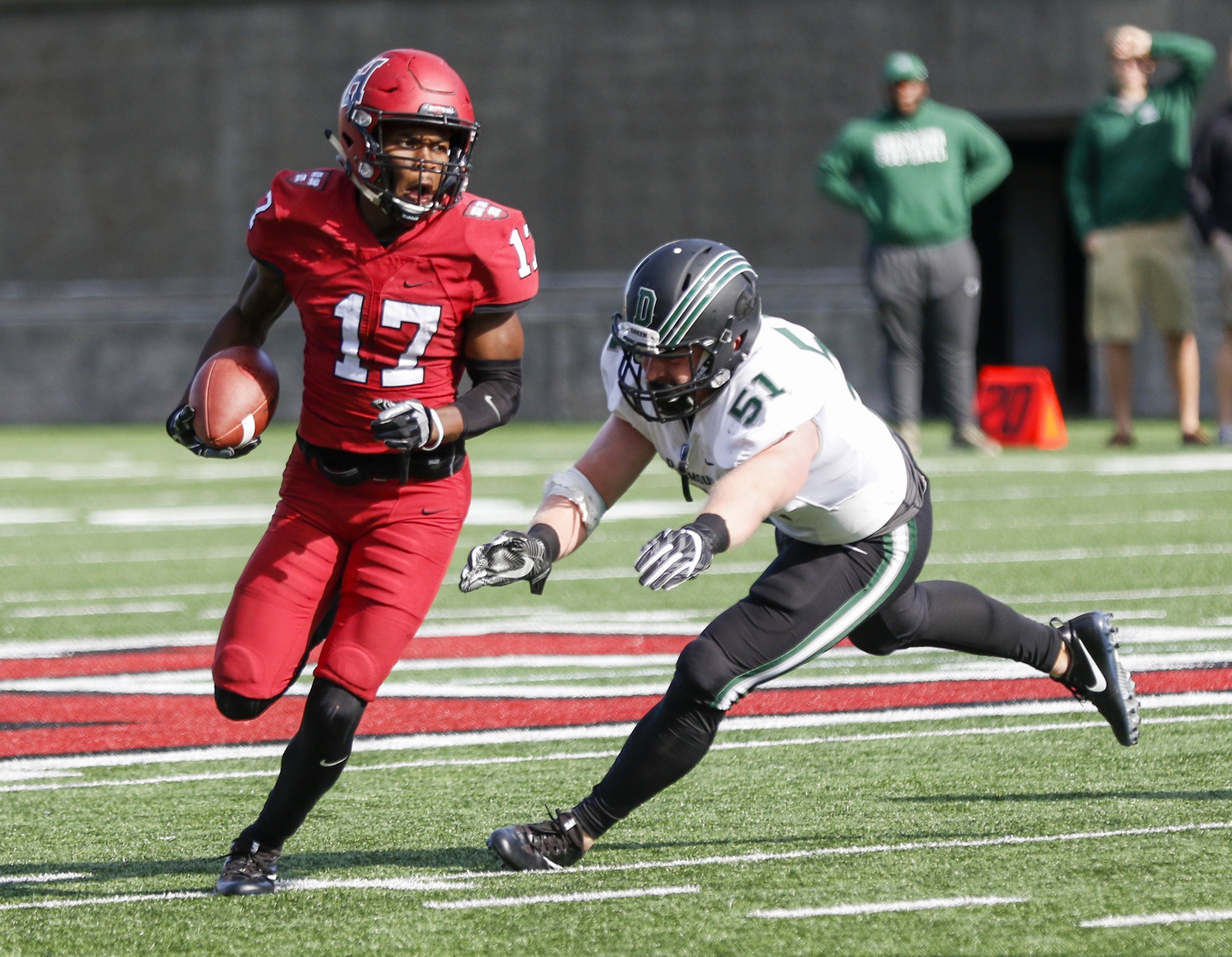 Cathartic. Nerve-wracking. Decisive. Shocking. Necessary. Pick any adjective you want—Harvard football’s win over Dartmouth deserved all of them.

The story of Saturday’s game began eight days before, when Princeton whupped the Crimson. That 52-17 blowout was embarrassing, plain and simple. Embarrassing because the game happened at Harvard Stadium on a Friday night. Embarrassing because Tigers quarterback Chad Kanoff racked up 323 yards before halftime. Embarrassing because preseason polls had slated the two teams to tie for first, the Crimson had spent all year preparing for the contest, the season had hung in the balance, and still Princeton had made Harvard look like a bunch of high school sophomores playing against Aaron Rodgers and Randy Moss.

That embarrassment is gone. On Saturday, the Crimson delivered a classic. Down 14-0 near the end of the first half, Harvard seemed dead in the water. Then a Big Green player fumbled a punt return, a visiting coach punched out a window, and Harvard splashed back to life.

The second half opened with the best seven minutes of the season for the Crimson. In that span, Harvard mounted a 12-play touchdown drive and forced a three-and-out. The Crimson didn’t secure the win until the fourth quarter, when freshman quarterback Jake Smith tossed two scores and the defense snuffed out a final drive. But for all practical purposes, Harvard reclaimed the game—and by extension the season—late in the first half. That was when a drowning team learned to swim.

The timing was fortunate because Crimson coach Tim Murphy stacked most of his chips on the Dartmouth game. The Big Green may not seem like a classic rival, but the Hanover, N.H., program has forced nail-biters in four of the last five matchups.

Little surprise, then, that Murphy reserved something special for Dartmouth. Harvard dialed up a surprise pass on a reverse run (sophomore wideout Justice Shelton-Mosley decided not to throw), a flea-flicker (the ball sailed incomplete), and a wildcat pass (sophomore wide receiver Lavance Northington threw a touchdown).

The point of mentioning these surprise plays is to highlight the importance of the Big Green clash. Murphy threw the kitchen sink at Dartmouth. Then he threw the dishwasher. Had Harvard lost, the defeat would have crushed the team and quashed any remaining hope. But the Crimson has new life. The slate is clean, wiped smooth with a Big Green jersey. A new season—the championship season—begins now.

No unit earned more redemption than the secondary. Against Princeton, that group had more holes than a pasta strainer. Against Dartmouth, Harvard defensive backs won the game.

Senior safety Tanner Lee set the tone with forceful stops on the first two plays. Fellow senior safety Zach Miller has emerged as a vocal leader. On Saturday, senior cornerback Raishaun McGhee played shutdown coverage and caused the final interception. Senior safety Tim Haehl blocked a punt. And cornerback Isaiah Wingfield—who is listed as a freshman but plays more like a veteran—dove for a second-half pick.

The defensive performance animated everyone, even injured junior cornerback Wes Ogsbury. After Haehl lunged for his blocked punt, Ogsbury ignored his medical boot, sprinted off the bench, and skied for a shoulder bump.

The Harvard offense added more excitement. Quarterback Jake Smith is the real deal. He knows when to scramble, when to throw the ball out of bounds, and when to lob a prayer. Any play-caller would kill for this poise, and Smith is a freshman. Partly, the rookie has looked so competent because of explosive targets. Don’t let yardage statistics fool you—Shelton-Mosley remains the second-best wide receiver in the Ivy League. He has glue-like hands and rocket-like legs. Somehow, fellow junior wide receiver Adam Scott is even faster. Senior Ryan Antonellis has emerged as the latest in a line of touchdown-magnet tight ends. All these options steady Smith.

Veteran defense and invigorating offense—at times on Saturday, the Crimson showed the potential that made the team a trendy pick to win the Ancient Eight. That potential will have to continue in coming weeks, as Harvard faces a true gauntlet to close the season. This Saturday, the Crimson faces 6-1 Columbia—a program that will come out furiously after losing against Yale. The next Saturday, Harvard hosts a Penn program that has beaten the Crimson the last two years. And then comes The Game. Good luck making a prediction with that one.

More trials loom, but Harvard has survived so many already. A season-opening loss against Rhode Island. A one-score heartbreak against Cornell. A blowout against Princeton. Last Saturday, 60 inspired minutes atoned for most sins. Murphy was animated in the postgame press conference.