A New Commercial Age in the Ivy League 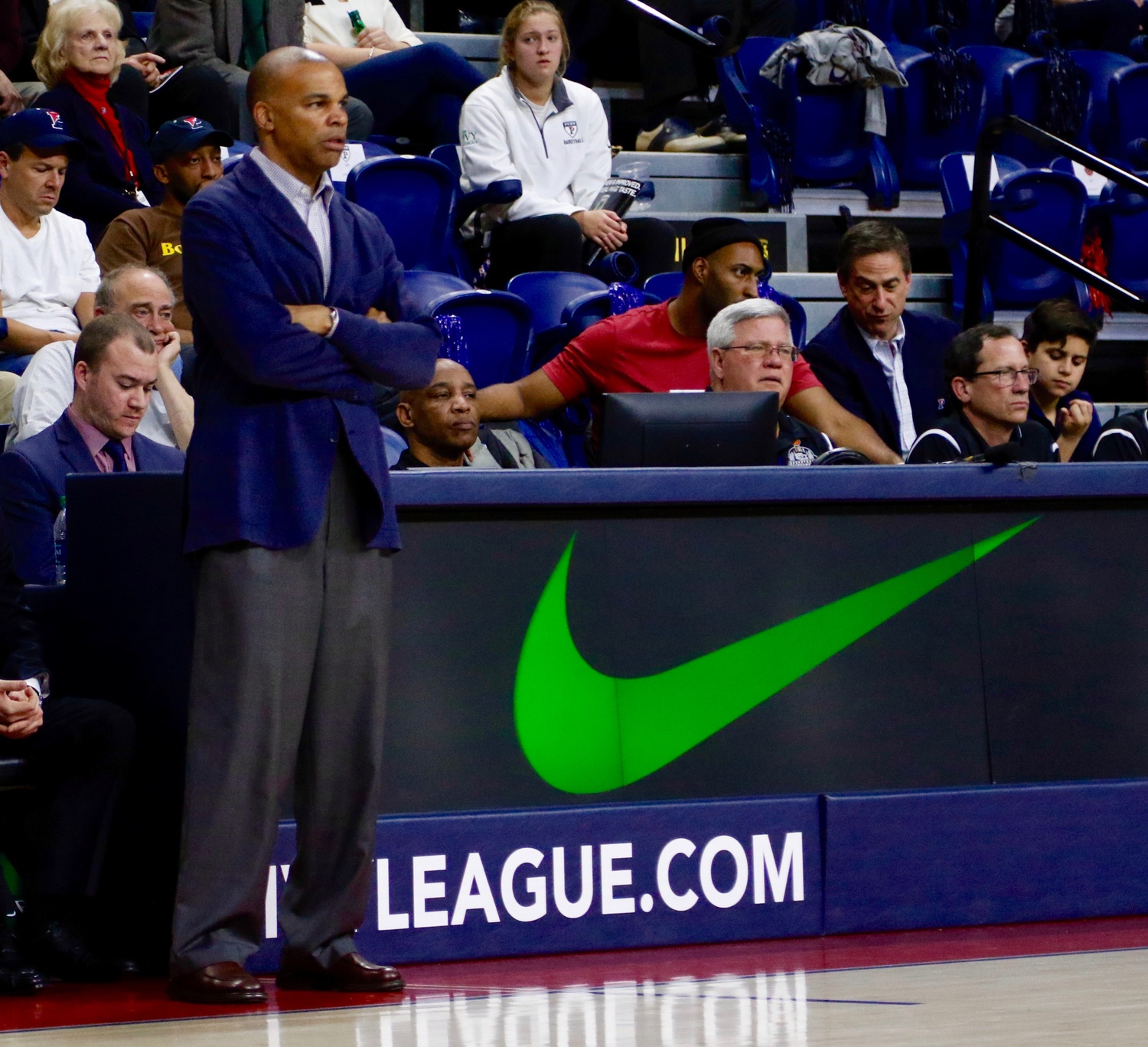 Coach Tommy Amaker looks on during the Ivy League semifinals against Cornell. Alongside Nike, Coca-Cola and Porsche had a sponsorship presence at this year's tournament. By Timothy R. O'Meara
By Henry Zhu, Crimson Staff Writer

Free Harvard Basketball t-shirts to student supporters, courtesy of Nike. A model 2018 Porsche exhibited outside the Palestra during the Ivy League Basketball Tournament. A peculiar 9:30 PM tip-off against Yale to accommodate ESPNU’s Basketball Rivalry Week Showcase—sponsored by none other than 5 Hour Energy.

What has been clear throughout my first season covering Harvard men’s basketball is that the Ancient Eight is trending ever so quickly away from the anti-commercial, idiosyncratic traditions of the past. An athletic conference once known for pioneering the Victorian ideals of amateurism, the Ivy League is increasingly embracing the “normal” economic model of larger Division I conferences: using its prestigious school brands, select sports, and high-income supporter base as revenue streams for athletic departments that need to fund more than 35 teams on average, the highest of any national conference. Keep in mind the sheer quantity of varsity sports is also closely tied with the Ivy League’s historical promotion of athletics as an extension of the classroom.

This may be disconcerting for traditionalists who believe that Ancient Eight athletics should be no more than glorified intramurals, but the reality is that certain sports such as men’s basketball and men’s hockey are gaining not only attention from the media, but attention from companies.

We are not talking merely about food trucks or concessions outside of Harvard-Yale. This is about replacing traditions like the 100 year round-robin format of Ivy League Basketball in place of a nationally-televised, four team tournament. This is about partnership deals with consultants such as JMI Sports, who manages the marketing of Kentucky Basketball, Clemson Football, and yes, the Ivy League. Individual schools like Yale are signing equipment deals on the level of Big Ten programs, while several former executives at the very top of the sports & entertainment industry now work for Ancient Eight marketing departments.

Let us be frank here, the commercial value of a conference that can barely make games on ESPN’s auxiliary channels or be mentioned in local news is still miles away from an ACC or Pac-12. But the inevitable trend toward growing commercialism, especially for the Ivy League, brings about several questions.

Will the Ivy League become just another heavily-sponsored athletic conference capitalizing on brand-name programs? How does this leave the future of non-profitable sports, especially when larger-sport booster programs may be providing an imbalance of support in terms of newer amenities and “perks”? Can we still preserve those weekend back-to-backs, the distinctiveness of hallowed facilities like Harvard Stadium or Whitney Payne Gymnasium, or the strange allure of long bus road trips in lieu of chartered flights?

Perhaps these concerns are jumping the gun. Perhaps it has something to do with the fear of normality that seems to seep into the Ivy League identity. Or the strange stubbornness to tradition that is a hallmark of the Ancient Eight (may I remind you: concentrations, not majors).

Overall however, I am optimistic, especially in light of recent investigations into the corruption within the NCAA, that the Ivy League can be a new trendsetter in redefining the relationship between money and college athletics. Just as it cemented the concept of amateurism in its founding years, the Ivy League should and can demonstrate that commercialism does not have to equate to jeopardizing the role of higher education itself: to create a welcoming environment for personal growth and education.

More concretely, this means that students should not have to play games starting past the 9 o’clock hour simply to sneak in a television time slot. Corporate sponsorships and larger media deals can be welcomed, but an expectation should be raised that coverage should reflect more than the raw athletic abilities of football and basketball players and that names like “Princeton” or “Harvard” be more than shiny badges of honor. Renovating the hockey weight room and selling merchandise at Lavietes Pavilion should be welcomed, but can we establish measures to ensure accountability in terms of support to say, women’s tennis equipment or baseball seating?

From a fan’s perspective, do the proper resources exist to ensure that all sports are readily accessible for viewing? The development of the Ivy League Network is a step in the right direction, but its rare subscription-based model and general lack of promotion leaves questions as to the logic behind a paywall system. With the announcement that the new ESPN+ will be featuring live coverage of Ivy League games, it may mean that watching a game requires a $4.99 monthly subscription. Here, what benefit does it serve to the overall college community?

As a writer for Crimson Sports, I must also acknowledge that we can do an improved job at diversifying our coverage and giving less-publicized sports their due recognition. The hope is that the Ivy League’s new commercial partners will also maintain a keen eye in respecting the Ivy tradition that still exists and balancing out their own marketing goals with those promoted by the university. In other words, let’s be conscious of what companies are advertising on our televised games, and let’s not bombard students who attend games with too many unnecessary flyers or corporate mementos.

To summarize, there should be a fine balance between allowing commercial partners to benefit programs, and for these companies to harm teams. The Ivy League can be a new trendsetter for corporate development and involvement. But students and student-athletes must come first.