Triple Threat: The Rise of the Three-Pointer at Harvard 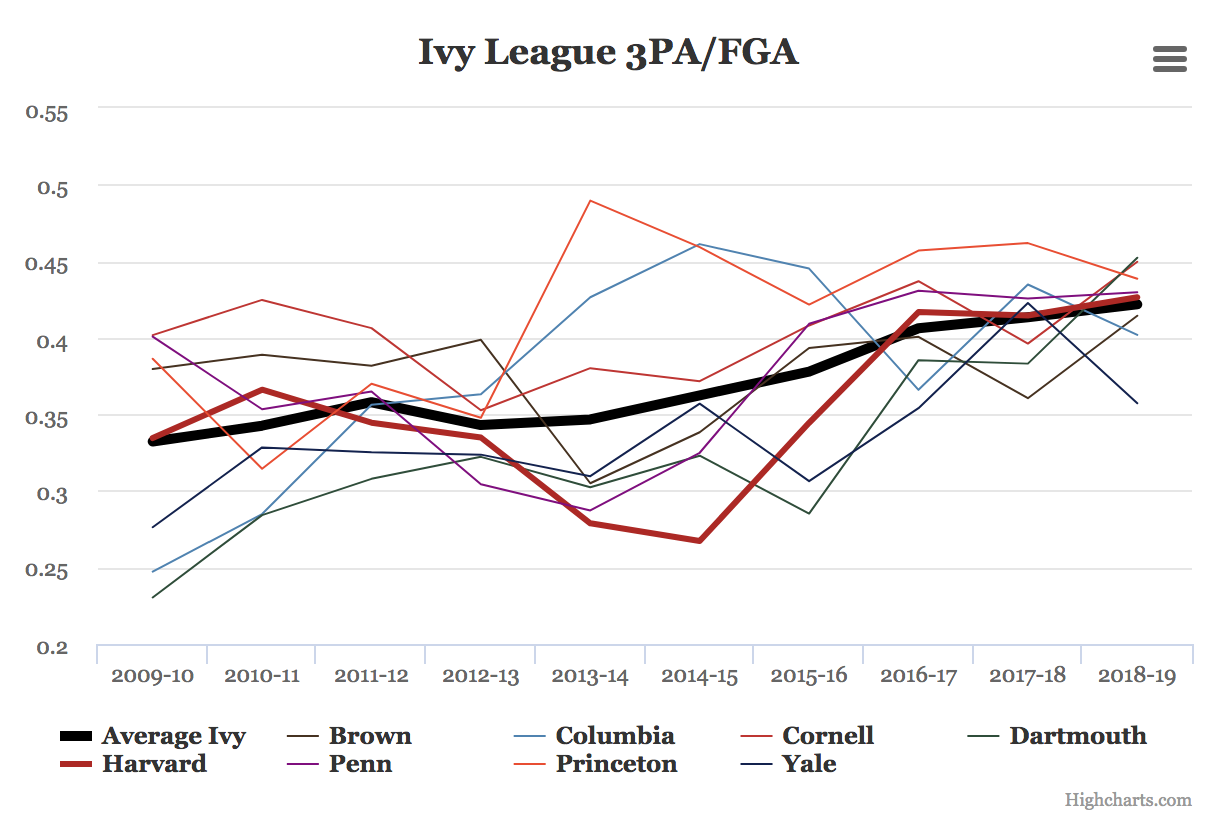 As the influence of analytics has spread across basketball, the style of play and overall aesthetic of the sport have evolved. As teams like the Golden State Warriors and Houston Rockets have embraced a pace-and-space, penetrate-and-kick offensive philosophy, basketball scoring has been cleaved into two categories: interior buckets within the paint (i.e. Giannis ball) or relentless three-point shooting (i.e. Curry ball).

Here, we will focus on the latter category and look at how deep range shooting has affected not only the NBA — in which league average three-point attempts per game (31.3) are at an all-time high — but also in the collegiate ranks. Specifically, how has Harvard men’s basketball experienced a change in its three-point shooting levels?

What is most notable here is the precipitous decline up to 2014-2015, followed by an drastic spike to a 23-plus level that has persisted to the present. Although its three-point attempts have remained relatively stable in the past three seasons, this new rate is significantly higher than the beginning of the decade, with about 5-6 more threes attempted per game.

Although the number of three-point attempts has risen in the past three seasons, shooting accuracy has not. The Crimson shot at a 40.1 percent clip in the 2012-2013 season, its highest in our measured range, but has since flattened to around the 35-36 percent range. That plateauing coincides in some way with a changing of guard, as the current highly-touted crop of juniors (including four ESPN Top 100s) first entered the team in 2016-2017.

Again, comparing from around 2014 to the present season, there is a statistically significant increase in the fraction of field goals that ended in a three-point attempt. Although the results show a marginally declining increase, the Crimson is still nevertheless showing a more aggressive season-by-season effort to take triples. This year’s current ratio is the highest in recent history at 42.6 percent. Compared to past renditions of the Harvard side (particularly pre-2016), this is a remarkably high ratio.

Finally, we did the same calculations for the remaining seven Ivy League teams and found that the Ivy average in 3PA/FGA has also seen a significant spike since the start of the decade. Currently in 2018-2019, the Ancient Eight on average attempts 42.18 three-point shots for every 100 field goal attempts, slightly below Harvard’s numbers. Princeton has recently led the pack in this category, achieving its highest three point to field goal attempt ratio in recent history — a resounding 48.95 percent — in the 2013-14 season.

Penn and Cornell, who saw coaching changes in 2015 and 2016 respectively, have also stayed mostly above the mean in recent years. Dartmouth, who this year has one of the nation’s leading three-point shooting units led by Brendan Barry — NCAA’s most accurate shooter from deep — unsurprisingly pace the Ivies at 45.22 percent 3PA/FGA this season.

What does the Crimson think about its three-point shooting?

Harkening back to the reference to the Warriors, the Harvard team had a once-in-a-lifetime experience this past Sunday. Following a win over the Boston Celtics the prior night, Golden State decided to hold a practice inside Lavietes Pavilion, and Harvard’s student-athletes were invited to watch Stephen Curry, Kevin Durant, Klay Thompson, and more take shots underneath its own roof. Previously, Harvard had hosted the Sixers and Duke Basketball this past season.

Coach Tommy Amaker, who had actually been teammates with Warriors head coach Steve Kerr on the gold-medal 1986 World Championship team, joked with his compatriot that he had “messed up the world of basketball” with the Warriors' relentless ability to drain triples.

“I said everybody wants to play like you guys, but no one has the players that you have,” Amaker added.

However, the Harvard coach did acknowledge his team’s embracing of several core principles that has spurred the Warriors to three titles in the past four seasons.

“Ever since we’ve been here, we’ve played with great pace,” Amaker said. “Pacing and spacing is exactly what we’ve talked about for years. [Golden State] has taken it to a totally different level, but there are similarities in terms of ball movement, getting people off with touches, counting the number of passes a possession. That’s exactly some of the philosophical things that are exactly the same.”

For Harvard players, the explanation of the team’s record frequency of three-point shooting brought more surprise than affirmation, particularly in lieu of the Crimson seemingly depending on junior big Chris Lewis’ “inside-out” presence and Ivy-leading field goal efficiency numbers.

“I feel like how Chris [Lewis] played last year, teams are really keying in on him,” classmate Rob Baker said. “...Instead of being able to throw it inside to Lew[is] we sometimes skip it and attack the double team by shooting a wide-open three-pointer. As long as we knock them down I have no issues with it.”

“I don’t know if that’s because of the game and how it is evolving in general, but that’s nothing that has been intentional as far as jacking up threes,” junior guard Christian Juzang added.

Regardless, there is little argument that the triple will continue to be a lethal weapon for the team as opportunities will abound for wings such as junior Justin Bassey and first-year Noah Kirkwood as well as stretch fours including sophomore Danilo Djuricic and Baker, among other targets.

As this season progresses into the depths of the Ivy League campaign, expect the emphasis on three-point shooting to continue to play a significant factor in influencing wins and losses. Looking ahead, it will be intriguing to see whether these upward trends from long range continue to persist in both the professional game and in the Ivy League.