So Now What? Thoughts on the Season for Harvard Men's Basketball 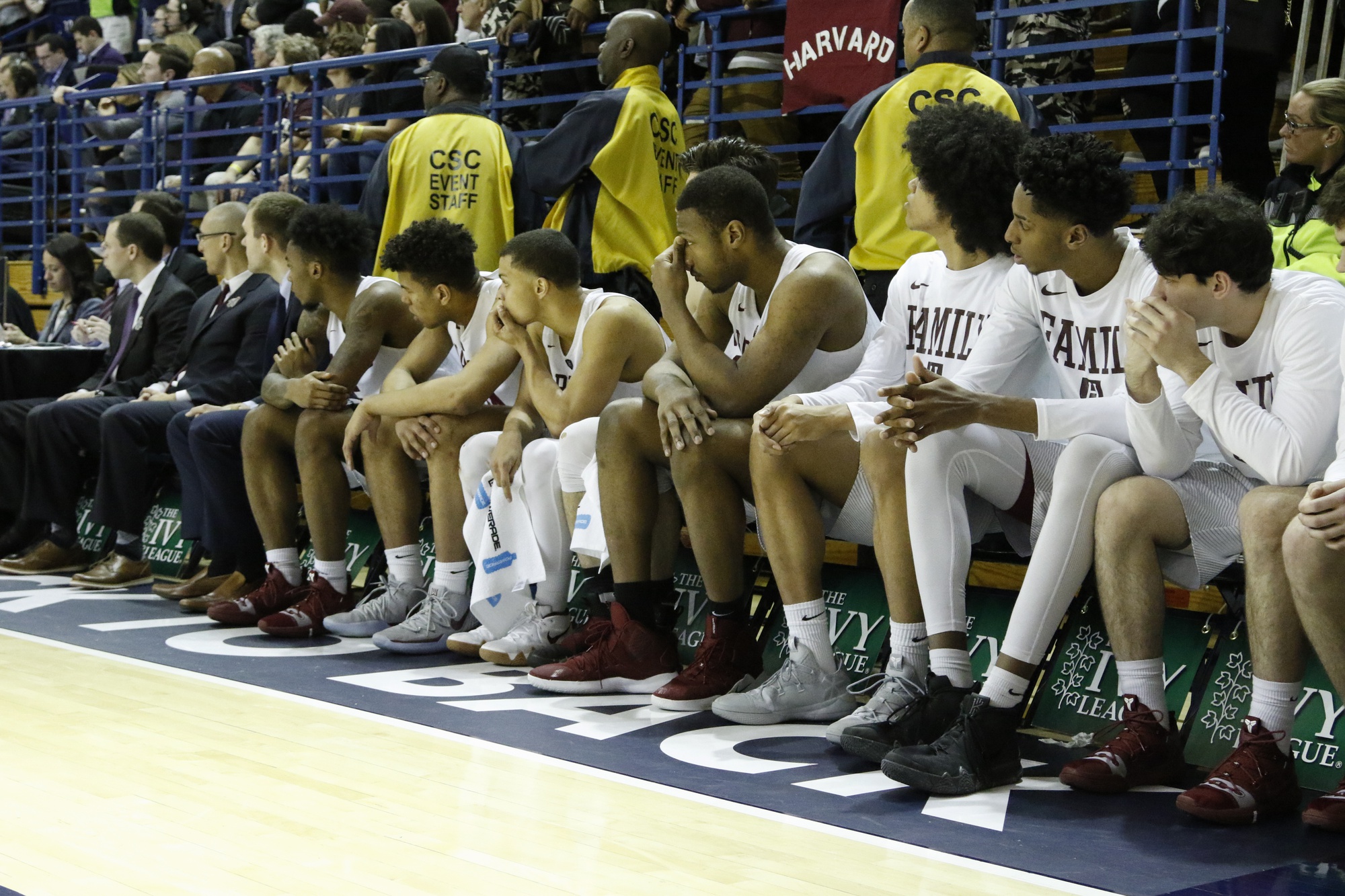 The Crimson missed out on its chance to earn a NCAA Tournament berth, falling to Yale on Sunday afternoon By Timothy R. O'Meara
By Henry Zhu, Crimson Staff Writer

Harvard men’s basketball had to walk in the midst of another program’s confetti for the second-straight season, still chasing the now-elusive Ivy tournament trophy. At the doorstep of the Big Dance, it is back to the drawing boards once again.

Last year’s tournament loss to Penn added a permanent scar in the minds of the returning players, one that was alluded to throughout this six-month, long-haul of a season. To have to experience the same disappointment and be denied once again of this opportunity must sting even stronger for this Crimson team.

Will the fourth time at the tournament finally be the charm?

To even think about that and not acknowledge the grueling, exhilarating season this one has been would simply be a disservice. A college basketball season, compounded by the off-court demands of the Ivy League, is already one that is stress-inducing enough.

But my goodness, was this campaign for Harvard one to remember.

Through all the last-second thrillers, Bryce Aiken buzzer-beaters, and heart-throbbing finishes, the end of the trip to March Madness for the Crimson seemed a bit too premature. The team was just celebrating its seventh Ivy title in the past decade one week ago in Morningside Heights — and now must digest the unappetizing medicine of heartbreak. It has one more opportunity to cap of the season as an auto-bid to the National Invitational Tournament(NIT), but this loss on Sunday afternoon will inevitably linger until next March.

And frankly, the culminating showcase for the Ivy League deserved another last-minute dogfight whose victors would not be decidedly crowned until the final ticks of the clock.

But the Crimson was simply inundated by an insuperable Bulldogs offensive wave in the second half, spurred frankly by the unlikeliest of circumstances: the benching of Yale’s “MVP” Miye Oni, who had picked up his fourth foul less than six minutes into the second frame.

After that foul, it’s no understatement to say a few in Crimson could taste it. Even with the imposing cast of offensive weapons Yale possessed, how could the Bulldogs edge its way back with its best player seated behind his head coach?

The game had gotten out of grasp, and not even some late heroics from Bryce (who notched a tournament-record 38 points) could nudge the uber-confident Bulldogs side — who reciprocated with points every time the Crimson even dared cut it within single digits.

What adds to the legacy of this season, is again, the fact that Harvard was on the doorstep of achieving its season goals even without star player Seth Towns. The late emergence of freshmen Kale Catchings and Mason Forbes alongside a blossoming Ancient Eight cornerstone in Noah Kirkwood bolsters an already deep squad.

Aiken proved his next-level abilities for all who may have doubted his ability to bounce back from knee surgery. Noticeable progress was made by key contributors such as sophomores Danilo Djuricic and Rio Haskett, while those such as juniors Justin Bassey and Christian Juzang continued to prove their worth in a multitude of capacities from on-court leadership to defensive acuity. The team showed an ideal mix of veteran experience and youthful energy.

To earn that seventh title is no feat to be ashamed of as well. Outside of the freshmen, the rest of the team will get its second straight ring and returns nearly all of its current scoring, alongside reinforcements headlined by Massachusetts Player of the Year Chris Ledlum.

The talent is undeniable for any squad assembled by Tommy Amaker, but as the gap continues to close within the Ivy League — as was well-and-apparent this season as the likes of Brown and Cornell made leaps forward — Harvard must do even more to once again lead the pack in the Ivy League.

And if one is to consider the current junior class as carving out an era in Amaker’s time at Harvard, the heartbreak of losing out on an NCAA Tournament bid three times means that this upcoming team will be hungrier and psychologically prepared as ever to see its turn at glory.

This may be exactly the takeaway. Amaker has preached sacrifice this season as the central motto, asking his team to embrace the “next play” mentality, on and off the court. Patience and discipline, from the outside observer’s eye, seems to be the underlying component of that message.

Thus, it is perhaps written in stone that this process will pay dividends only in Year Four for these juniors. The prior three teams have seen its fair share of accomplishments, both team-wise and individual. But the final coveted prize, a berth in the NCAA Tournament, demands an equally coveted degree of patience.

‘Til next March we await.