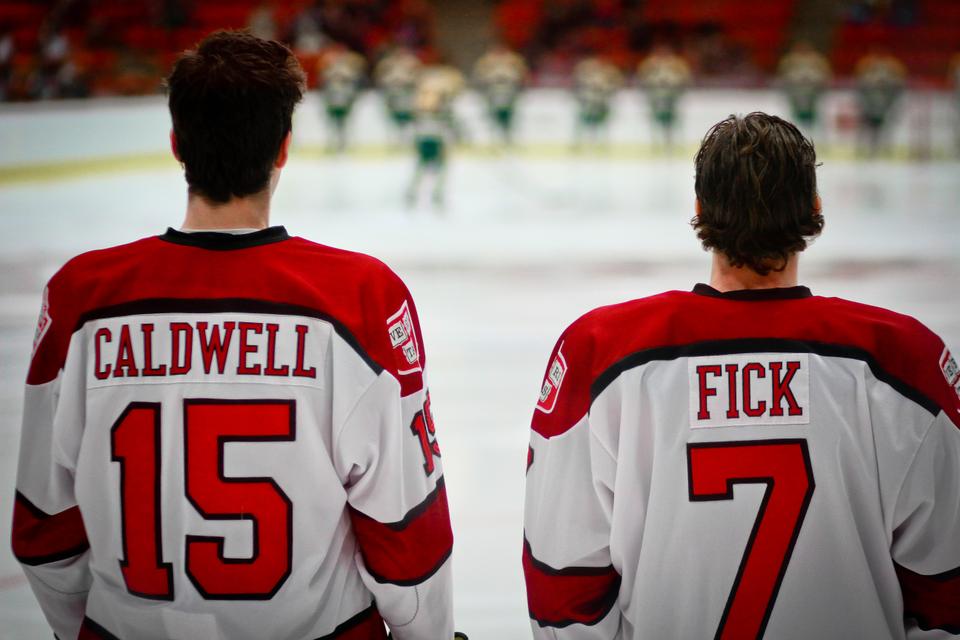 High preseason expectations and abysmal recent performances have combined to create a perfect storm of disappointment for the Harvard men’s hockey team (5-13-1, 3-11 ECAC). The Crimson, which both major preseason polls picked to finish third in the ECAC, has lost six straight and 10 of its last 11.

This weekend, Harvard returned to the Bright Hockey Center after a difficult seven-game road stand only to fall to Clarkson, 5-1, and St. Lawrence, 4-3 (OT). Now that the last-place Crimson sits more than a game behind its closest ECAC rival, fans may be more than ready to play The Blame Game.

Who is the easiest target of The Blame Game? The most obvious answer is Harvard coach Ted Donato ’91. Fans may lump this month with a long string of recent underachieving Januaries for Donato’s squads. Over the past three seasons, Harvard has posted only five wins in 29 January games. Midseason hockey disappointment has become something of a Harvard tradition.

But this is no ordinary midseason slump. X’s and O’s or a different man behind the bench cannot adequately explain the Crimson’s woes. Rather, Blame Gamers may directly trace Harvard’s difficulties to a depleted defensive corps. A gaping hole in the Harvard blue line has sunk the Crimson’s ship this season.

Before the puck was dropped in that game, sophomore defensemen Max Everson and Patrick McNally, who had played in all seven of the team’s previous games, were taken off of the roster. The loss of these two key defenders promised to hurt. Last year, the ECAC had named McNally, a Vancouver Canucks draft pick, to its all-rookie first team. Everson, a Toronto Maple Leafs prospect, had appeared in all 34 of the Crimson’s games as a freshman.

During the 5-0 loss, it was clear that the shorthanded Harvard squad would have to make some significant adjustments. At the drop of a hat, Harvard lost one-third of its primary defensive corps. As the Crimson prepares for the first round of the Beanpot, Harvard fans should not underestimate the extent to which the midseason developments have impacted their team’s physical state and talent level.

The departures placed an immediate burden on the Crimson’s six remaining defenders. Everybody was on the front lines. In recent weeks, injuries have often forced the Crimson to rotate fewer than six defensemen. Saturday against St. Lawrence, Harvard played only four.

The situation has also required several Crimson players to assume significantly larger roles midway through the season. Everson and McNally were immediately replaced by juniors Danny Fick and John Caldwell, two ECAC all-academic selections who had only appeared in a combined 25 games for the Crimson last season. When freshman defender Desmond Bergin sustained an injury earlier this month, the Crimson called up junior JP Gillmeister from the Harvard club hockey team to suit up for two games.

The results during the absence of Everson and McNally speak for themselves.

Since their names were deleted from the roster, the Crimson has not won a single game in regulation. The team’s last regulation win came on Nov. 16 over Cornell.

At the beginning of the season, Harvard’s goals-against average with the defensive duo in the lineup was 2.14. Without them, it’s 4.25.

And with McNally off the power play unit, the Crimson’s success rate has dropped precipitously. Last year, Harvard converted 27.4 percent of its opportunities to lead the NCAA. This year, Harvard is dead-last in the ECAC at 10.5 percent.

Co-captain and defenseman Danny Biega has been unable to approach the Orr-esque numbers of seasons past. The defenseman has recorded only five points (all assists) this season, well off the pace for a third 30-point season.

Another Crimson hockey “tradition” in recent years has been the late-season resurgence. In the last two seasons, Harvard rebounded from disappointing midseason performances to finish strongly. In 2011, a sub-.400 Crimson squad went 7-1 after the Beanpot before falling to Dartmouth in the ECAC quarterfinals. In 2012, the team that set a record for the most ties in an NCAA season found a way to win late, making a surprising run to the conference final.

In 2013, Harvard will receive another late-season opportunity to reassert itself. The Crimson’s 6-5 comeback, overtime win over No. 8 Boston University on Jan. 9 speaks to Harvard’s talent and heart. But as the Crimson continues to struggle with its impossible defensive dilemma, Harvard fans may have little hope that the tradition will continue.

—Staff writer Michael D. Ledecky can be reached at mledecky@college.harvard.edu.