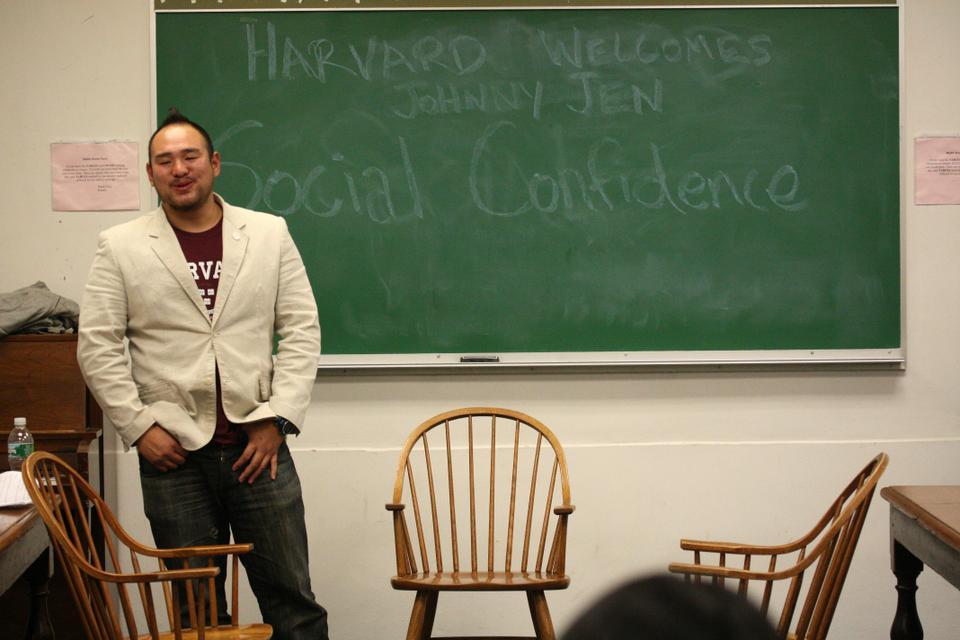 Johnny Jen—a self-described “Asian guy with a mohawk”—gave a workshop on social confidence this afternoon in the Quincy Bullitt Room.

The presentation, hosted by the Taiwanese Cultural Society, was officially billed as “Developing Social Confidence: Overcome Limiting Beliefs and Breaking Social Barriers.” The email advertising the event began: “Do you know how to make a good first impression? What about making a good impression to date a MOVIE STAR?”

That’s not exactly on Flyby’s list of things to do, but we were intrigued by the description of Jen, who was advertised as “a San Francisco born Taiwanese-American [who] has traveled all over the world from Australia to Hong Kong, talked his way into backstage concerts, mingled with celebrities, bungee-jumped in the jungle, and dived among sharks.” Naturally we had to check this out. Were you too shy to show up? No problem—Flyby’s got some of the highlights from Jen’s advice below.

1) Dig deeper. That is, stop making superficial small talk and start making meaningful small talk. Instead of talking about what you do, talk about why you do it. Sharing stories about your childhood, especially about your relationships with your parents, is a plus.

2) Break rules. “There are a lot of rules that society says that don’t really make any sense,” said Jen, who added that he recently ate at a Harvard dining hall and printed out fliers at Lamont without a Harvard ID. He also said he has sweet-talked his way to Ireland and back without a passport—although he did say this was not really a good example to follow. Not everyone should break the rules, Jen said, but “it’s okay if a couple of us do it.”

3) Wear pins. Jen, who loves scuba diving, said he likes to wear a pin that reads “I dive” so that he can start conversations with people who also like to sucba dive. “Nobody ever wears a pin unless it means something,” he said. It’s a great way to pin down a meaningful conversation topic (see #1).

4) Submit your resumes in FedEx boxes. Jen said job-hunting is all about who you know—no one wants to read piles of anonymous resumes. But if you don’t know anyone, a FedEx box will do the trick. “If a company gets a FedEx box, they assume it's important,” Jen said. He also suggested that you could just show up in person with your resume.

5) Smile and make eye contact. Just don’t give fake smiles. Although those are better than blank faces, which Jen said could be misinterpreted as angry. The best thing is what he calls the “selective smile,” which is when you make eye contact with someone and smile slowly.

6) When going bungee jumping, don’t jump feet first. Jen explained that the cords are tied to your feet, so if you don’t dive headfirst, you’ll end up doing a back flip that’s pretty painful. What does bungee jumping have to do with being socially confident? Well, Jen said, if you can do that, you can pretty much do anything. Plus you’ll have a great story to share in conversations (see #1).

At the end of the workshop, Flyby decided to ask Jen if anybody ever criticized him for being too smooth. He said, “People always hold you back. Especially because it makes them uncomfortable to have a change even if they know it’s better for them. If you know what’s good for you, and it could potentially make you feel happy, just ignore everyone else.”

We'll keep that in mind.