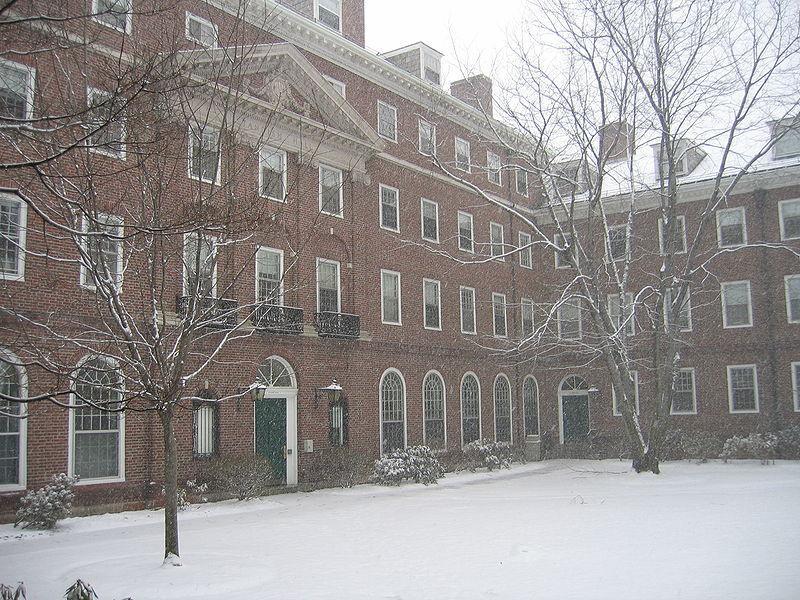 Some of these windows have AMAZING river views.

As Housing Day approaches, FlyBy will serve as your personal rating agency with a complete rundown by a resident of each House. Not that you have any say (River Gods notwithstanding), but at least you’ll know whether your portfolio is getting a downgrade.

One of the seven original houses, Winthrop House has a rich history, sheltering three Kennedy brothers in its heyday. But, as they say, the more things change…the more things change. Winthrop lacks much of its former glamour and desirability. But what it lacks in singles, it makes up for in occasional sewage leaks! Score! (Am I right? Guys? Guys?!)

Location: Sweet suite? With the most riverfront property of any house, Winthrop’s location is definitely a boon. Seniors are basically guaranteed views of the Charles, and Winthrop residents can be found lounging in the courtyards overlooking the river on sunny spring days (all three of them).

Just steps from the MAC and the Charles, Winthrop residents are situated perfectly for a jog beside the river or a quick dip in the swimming pool. For all you night owls and party animals, Winthrop’s doors are located just a hop, skip, and a jump from ’Lipes, ’Nochs, and Stillman Infirmary.

Winthrop operates by the motto: "Keep your friends close and your frenemies closer." If you want to get to know your blockmates (and the people through the fire door, and the people those people are sleeping with, etc.), Winthrop is the place to do it. Almost all sophomores live in miniscule doubles, and residents are sometimes forced to squeeze into double bedrooms even during their senior year. But with common rooms in every suite, Winthrop lodging is ideal for forced socialization. Plus, humans bond over trauma, and if murdering a six-inch cockroach in your bedroom isn’t trauma, I don’t know what is. Um…at least you have a river view?

Dining Hall: Subterranean: an unparalleled. if underground, dining experience. The ID-swiper, Sonia, makes a point to know every Winthropian’s name—and even the names of their most frequent guests. The dining hall stays open 24 hours, drawing problem-set troglodytes and mixer-seeking second-semester seniors  on a nightly basis.

The other drawback to Winthrop’s subterranean dining paradise is that the kitchen has been known to flood…with sewage. For reference, look at the infamous incident of February 2008, which spurred Resident Dean Gregg Peeples to e-mail residents with this solemn warning: “Until things are brought under control, every thing you flush or otherwise send down the drain in our building will end up in the basement.” Gross. Might as well throw in a mention of that hideous wall sitting right in the middle of the room, too. Really detracts from the rest of the beauty? I guess?

House List: Dictatorial. Throptalk is perhaps best known for its tyrannical moderators, who require all posters to introduce themselves with a “fun fact” or risk seeing their message bounced by particularly vehement subscribers. Some people (predominantly tutors) are entertained by this. Most residents simply want to borrow a copy of “10 Things I Hate About You” and move on with their lives.

Other house administrators of repute are Peeples (mildly terrifying but ultimately harmless), Superintendent David Simms, and Enoch, a Ghanaian table-tennis champion-turned-security guard. Ronald S. Sullivan and Stephanie Robinson were recently selected to assume the duties of House Masters in June, with Rosen and Sassanfar set to step down after a six-year stint at the helm. Sullivan (who met Barack Obama on the basketball court in their HLS days), and Robinson will be the first black couple to serve as House Masters at Harvard, fulfilling Winthrop’s longstanding commitment to diversity (it was the first house to accept Catholics and Jews).

House Culture: Divided. Some hard-core Winthropians have mystifying Griffin pride, but the majority of the house is blasé about ’Throp culture. Although it plays host to campus “traditions” like Debauchery and Thropstock (the house’s outdoor carnival), Winthrop residents don’t summon a lot of energy for the house on the whole. The exception to this apathy is IM sports. IM victories are frequently broadcast over Throptalk, complete with suggestions that Winthrop’s athletes channel superhuman vigor and inexplicable devotion to sports on a regular basis. Power to them. (You can find me in my common room, summoning superhuman heroism on a regular basis in order to kill a midsize colony of cockroaches that have taken up residence there.)

Overall rating: Subprime. * There’s only so much that the devoted House Masters, friendly staff, and scarily committed amateur athletes can do to make up for the miniscule bedrooms, scanty house spirit, and (literally) crappy dining hall. Just know that you can eat your tears away on Housing Day when Winthrop lures you to the river with food and beverage. "But really?!" you exclaim. "Worse than Dunster?!! Did any other house actually get a 'subprime”'rating??...BUT WE HAVE RIVER VIEWS!!!"

Just keep telling yourself that.