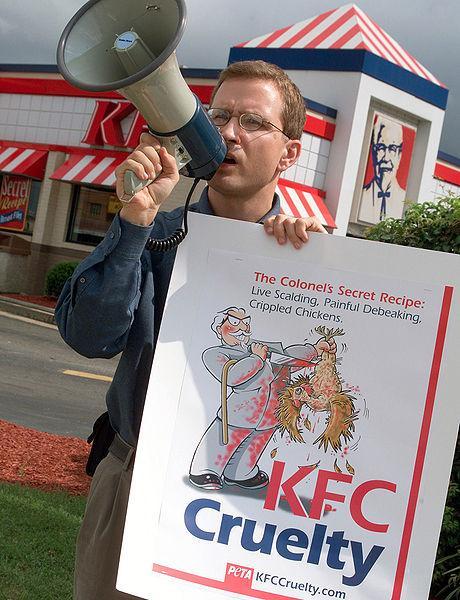 Most Harvard students eat meat. And most Americans probably think of People for the Ethical Treatment of Animals as an extremist group.

You wouldn’t have known it at the debate the Harvard College Vegetarian Society organized this afternoon between Wesley N. Hopkin ’11, a social studies concentrator and member of the Harvard Speech and Parliamentary Debate Society, and Bruce G. Friedrich, vice president of policy and government affairs for PETA.

The most heated dispute concerned our own Harvard University Dining Services. Hopkin praised HUDS: “They are moving in the right direction,” he said. “We can, generally speaking, eat meat or eat meat products with a relatively clear conscience even now.”

Friedrich responded sharply. He noted that HUDS buys eggs from cage-free farms, but said that is the only bright spot. “Eating meat in HUDS when they are doing nothing for farmed animals, and eating meat in the real world, in any restaurant around here,” he said, “for people here who said you do eat meat: that is unethical.” Get the skivvy on Hopkin's response and more after the jump.

Throughout most of the debate, though a slim majority of the packed Science Center audience admitted to eating meat, Hopkin conceded Friedrich’s arguments about the immorality of being a carnivore in today’s world. PETA seemed downright reasonable.

Hopkin and questioners from the audience rarely presented compelling reasons to dispute the main thrust of Friedrich’s well-supported argument. The PETA leader argued that facts overwhelmingly show that eating meat is bad for the environment, for the world's poorest, and for the conscious experiences of animals. Instead of disputing Friedrich's figures, Hopkin and others raised abstract intellectual questions heard in Social Studies 10 and “Justice”: How can we compare animal pain with human pain? And can animals be a part of the social contract?

Friedrich's argument, by contrast, was direct and sure of its moral clarity. Throughout the event, he peppered his arguments with colorful quotations from celebs and intellectuals alike:

From Paul McCartney: “It’s staggering when you think about it. Vegetarianism takes care of so many things in one shot: ecology, famine, cruelty.”

From Leo Tolstoy: “Vegetarianism is the root of humanitarianism.”

And from Cameron Diaz, on eating bacon: “It’s like eating my niece.”

Hopkin, the subtle debater, conceded that today's factory farming practices are "unconscionable, and should not be permitted." Instead, he wondered whether better farming techniques could ever create a world in which eating meat was ethical. He advocated an approach to animal rights that focused on the social contract instead of utilitarianism, and on leveraging consumer power to work for better farming practices instead of abstaining from eating meat.

Is it ethically permissible to eat the meat leftovers of your friend sitting across the table at dinner?

How anthropocentric is the social contract, after all?

Cuteness aside, can we kill kangaroos in the barren outback of Australia?

And: is it morally responsible to own a pet—or should you buy a bonzai tree?