Chairs in the Hood 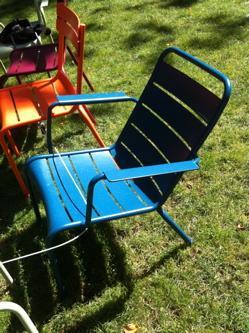 One of the coveted recliners. Note the cord.

About a week after their initial placement in the yard, we wondered, how are the colored chairs doing?  We know they are meant to serve as a "new form of gathering space," so are they performing?

FlyBy did a lazy-Sunday lookover, and it appeared that about 30-40 percent of the chairs were full, and almost entirely by non-Harvard students. (We could tell because they were, um, old.)

The reclining chairs, which comprise about one out of six, seemed to be the most popular, and the footstools seemed to be generally ignored.  We were interested in what was keeping the rainbow dinette sets from being stolen, and a closer inspection revealed a metal cord wrapped around each array.  Very sharp, Harvard.  See the chair demographic in action after the jump.

For the most part, we have to say that even on an idyllic afternoon, with sun and perfect temperatures, the chairs were not really expanding the College's social space.  Most students seemed to have somewhere to go on their way through the Yard.  Unless you count the ever-present revolving door of tourists as part of the College, this is definitely a small first step.  Next stop, 45 Mt. Auburn.