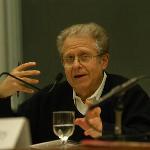 In May 2009, shortly after the retirement of Supreme Court Justice David H. Souter '61, Carl M. Loeb University Professor Laurence H. Tribe '62 wrote a short letter to President Obama, in which he laid out the case for appointing the recently departed Dean of Harvard Law School, Elena Kagan, and the case against appointing Sonia M. Sotomayor.  The letter, recently posted by former Bush administration lawyer M. Edward Whelan III '81 on the Ethics and Public Policy Center’s website, has garnered significant attention in the media for Tribe’s frank characterizations of those serving alongside Justice Souter and those being considered to replace him.

In the letter, Tribe describes Sotomayor as "not nearly as smart as she seems to think she is." Noting Sotomayor's "reputation for being something of a bully," Tribe cautions Obama against her appointment, warning that this aggressive bench behavior "could well make her liberal impulses backfire and simply add to the firepower of the Roberts/Alito/Scalia/Thomas wing of the Court."

After urging Obama not to appoint Sotomayor, Tribe counsels Obama to appoint Kagan, "whose combination of intellectual brilliance and political skill would make her a ten-strike, if you’ll forgive [his] reference to bowling." Continuing to praise Kagan, Tribe describes her as "a scholar of the first rank and a star as a teacher" and as someone who "would project a well-grounded image of justice as fairness and of law as codified common sense."

Since the letter was leaked last week, Tribe has refused to discuss what he regards as "confidential advice to the president." He has, however, said that his opinions on Sotomayor have changed, noting "that the reservations [he] expressed about Justice Sotomayor prior to her nomination were amply refuted by the closer study [he] was able to give her record before the president made his decision and were happily negated by her performance as a justice thus far."