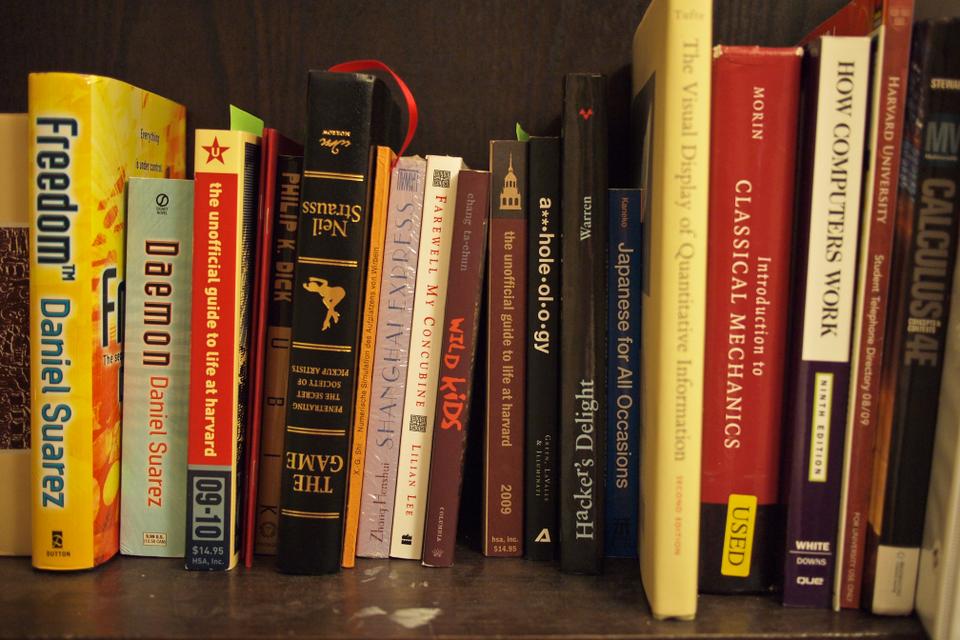 Just in case the weather has you down (or you've already done all of your required reading for the spring term), we at FlyBy asked faculty members to give some reading suggestions for the remaining days of spring break. Here's what they told us.

Wallace, the co-discoverer with Charles Darwin of evolution by natural selection, produced this classic of Victorian travel writing on his return from eight extraordinary years of scientific exploration throughout South East Asia. A mix of travelogue, science, ethnography, and pure adventure, it is wonderfully readable (much more so, frankly, than Darwin's Voyage of the Beagle), and reveals a Wallace forever struggling to reconcile his child-like sense of wonder at what he is seeing with the stiff-upper-lip expectations of his Victorian audience. Perhaps this conflict is best captured by his account of a previous expedition that ended disastrously when his ship home from Brazil caught fire in the middle of the Atlantic, leaving Wallace and ship's crew adrift in an open boat for ten days until rescue arrived. "During the night I saw several meteors, and in fact could not be in a better position for observing them, than lying on my back in a small boat in the middle of the Atlantic." Positive-thinking, Victorian-style! Reading Wallace is a wonderful antidote to the prevalent notion that the theory of evolution is Darwin's, and Darwin's alone.

Friedman was one of the most important economists during the second half of the twentieth century.  In this book, he explains his approach to economic policy, which includes more emphasis on personal freedom and market mechanisms and less emphasis on centralized governmental solutions. This book is always one of the favorites of students in my freshman seminar. Both those who agree with it and those who don't appreciate Friedman's straightforward, logical prose.

The frequency of war may be in decline but international tensions are often high, fuelled by rising populations and expected resource shortages. Preventing Genocide shows how mass violence has been avoided, and how it can be reduced in the future. For anyone seriously concerned about a dangerous future, Hamburg's prescription for avoiding deadly conflict is an invaluable "how-to" guide. In Larry Diamond's words, this book "is a work of profound empathy, analytic insight, historical erudition and disciplined passion." It shows that genocide is preventable, but it also demands that we engage in the problem. It will make you a practical optimist.

Martin Luther King Jr.'s Where Do We Go From Here: Chaos or Community?

This week, I'm down in Hayneville, Alabama - between Selma and Montgomery - on an Alternative Spring Break trip. My students and I are here to help rebuild a black church that was burned in an arson attack a few years ago. I am taking this opportunity to re-read Dr. Martin Luther King Jr.'s classic book, Where Do We Go From Here: Chaos or Community? This was King's final book, written the year before his assassination, at a time of profound transition—not only for the black freedom struggle he helped to lead, but also for a nation still struggling to overcome the burdens of its complex history. This was King's deepest meditation on the intersecting crises of racism, poverty, and war, and it offers a prophetic roadmap for all of us who are still struggling to find community and justice in the midst of chaos and division. These matters weighed heavily on Dr. King in 1967, and they should weigh heavily on all of us who still dare to dream of a better world.

Religion, science, history, bureaucracy, a hilarious end of the world story—what more could you want? Anyone who has not read this book at least twice should do so.

Many critics have written more eloquently than I ever could about what makes this novel great. It shows in exquisite and often painful detail how our adult personalities are shaped by our own choices (which may not be as free as we think they are) and by powerful forces beyond our control. Maugham has a remarkable ability to evoke a vivid, realistic world with seemingly simple prose. Warning: not a happy fun book.

Roger B. Porter - IBM Professor of Business and Government at the John F. Kennedy School of Government, Master of Dunster House

Pilgrim's Way is the gracefully written memoir of John Buchan (Lord Tweedsmuir) who grew up in Scotland, attended Oxford, served in Parliament, and was Governor General of Canada at the time of his death in 1940. A prolific author, he lived as well as wrote about history. His portraits of contemporaries are full of insight. His philosophy of life is both challenging and inspiring and as relevant to today's world as it was to his generation. Not least, his prose is a pleasure to read.