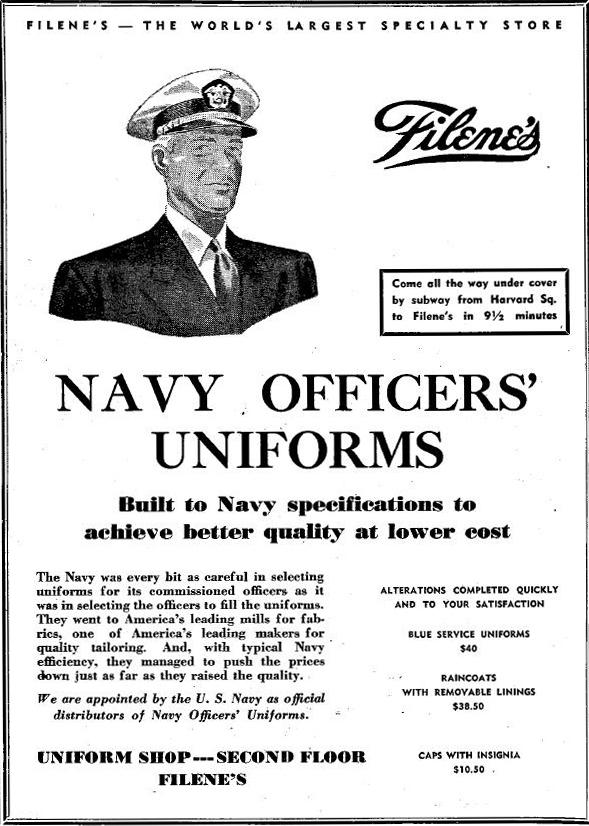 Their representation might be weak next weekend, but the class of 1945 is still celebrating its 65th reunion this year.

This particular class, of course, had an unusual college experience in many ways. Enrollment decreased, the schedule changed, and life was generally focused on the war effort. The Crimson ceased its publication and ran twice a week under the banner Harvard Service News. Ads for bonds and navy uniforms (click on the image) frequently appeared on the pages of the Service News.

But campus life didn’t come to a halt altogether—there was just a shift in focus.

Intramurals, for one, stayed active. But on top of IM baseball, the Houses took part in competitive fundraisers and blood drives as part of the war effort. On June 21, 1945, Phillips Brooks War Service Committee announced the results of both, with bond purchases passing $32,000. Adams, according to the article, bested “its closest rival, Lowell,” by $1000. It also donated the most blood, giving 61 of the 200 total pints.

Other social events include a Feb. 1 smoker hosted by the class of 1948 in Lowell dining hall. (It’s unclear whether they had to use trash bags to cover the fire alarms back then too.)

Another author offered his (hopefully facetious) input to another element of 1945 Harvard-Radcliffe life—dating—in his article, “You Can’t Get a Woman? Why, Get a Radcliffe Girl” (which is unfortunately not available online).

“Nearest at hand is Radcliffe, famous for producing ‘encyclopedias with hair attached,’” the Dear Abby-esque column reads. “’Cliffe dwellers were variously criticized as too smart, too dumb, too forward, too shy, too sophisticated, and too simple.”

After wrapping up his Radcliffe recap in the far-from-politically-correct article, he says that Harvard undergrads can try their luck at other local schools, including Wellesley, Smith, and Holyoke.

But L. Esprit Gaulois—the story’s fictional author—said that having friends in the Quad had its merits.

“Radcliffe friendships are valuable if for no other reason than the femmes often takes legible notes on the lectures you’ve cut.”