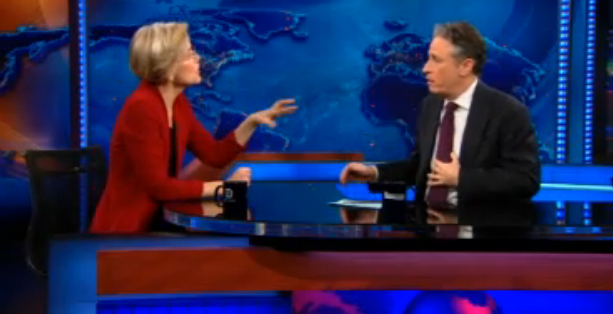 Harvard Law School Professor Elizabeth Warren took her campaign for Massachusetts junior U.S. Senator onto the airways Tuesday night with an important message. "The Pats are gonna spank the Giants," Warren declared on "The Daily Show" with Jon Stewart.

Warren's Tuesday appearance on the popular comedy show was not her first. She has appeared as a guest before to discuss her work with the Consumer Financial Protection Bureau and the Congressional Oversight Panel.

But Tuesday night's appearance was Warren's first since she declared her candidacy for U.S. Senate last fall. The race between Warren and Republican candidate Scott P. Brown is expected to attract a lot of national attention in coming months.

Although Warren traded jokes and Super Bowl predictions with Stewart, she made sure to address tax policy, lobbying, and investment—the touchstone issues of her campaign thus far.

"It's a big and systemic problem here," Warren said of the United States' taxation policies. "I grew up in an America that was still investing in the middle class. That was the principal function of Washington and how it spent money. It said 'we're going to invest in America's middle class.' It's how kids like me, the daughter of some guy who sold fencing, ended up as a professor."