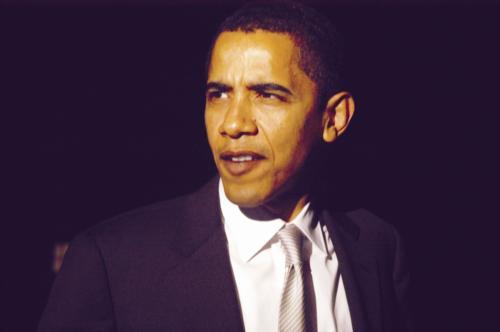 President-elect Barack Obama, the Harvard Law School graduate and presidential candidate, arrived at the Cambridge home of Law School professor David B. Wilkins ’77 for a $2,300-a-plate fundraiser in March 2007.

With the presidential candidates all over our TV screens and newspapers in the final weeks before the election, it's easy to forget that they once got their humble beginnings here at Harvard.

Before the big fame hit, Republican nominee Mitt Romney and President Barack Obama were already no strangers to The Crimson. As early as 1994, Harvard Law School and Harvard Business School alum Romney was featured in a Crimson profile that shines some light on his current race. But even before then, Obama, another Law School alum, was already gracing the pages of The Crimson.

Beginning from his time as a student, all the way until he became President of the United States, let's take a trip through The Crimson's early coverage of Obama!

In Feb. 1990, Obama, then a Law School student, was elected the first black president of the Harvard Law Review. Following his (first) historic win, Obama called the victory "a significant change from the Harvard Law School of the past," adding that "for every one of me, there are a whole bunch of young Black people who, because of drugs, poverty, or whatever, aren't getting the opportunities I have." Even then, Obama hinted at his later ambitions, saying his future plans could range from running for political office to running public service programs. So modest.

As he prepared for post-graduate life in 1991, Obama tried his hand in another election—this time for a seat on Harvard's Board of Overseers, the University's second-highest governing body. Running as one of the three candidates for the Harvard-Radcliffe Alumni Against Apartheid organization—an outsider group dedicated to divestment in South Africa—Obama and his fellow HRAAA candidates ultimately lost.

But Obama couldn't stay away for long! In 2006, Obama—now a Democratic senator from Ill.—was back in Boston to introduce Deval L. Patrick '78, then an outsider candidate for governor of Mass. In his speech, Obama avoided the H-bomb like a true Harvard alum. He said he "spent three years in a library in Boston, making sure I actually graduated from law school," and only later admitted that "library" was actually in Cambridge.

Ironically, Obama was there to endorse a candidate who would soon succeed the sitting governor, Romney. Though he finished his first term as governor of Mass., Romney did not seek reelection in the state in 2006 to instead focus on running for president in 2008—an election that Obama would ultimately win.