Some Like It Hot (And Heady): A Night Out in Denton 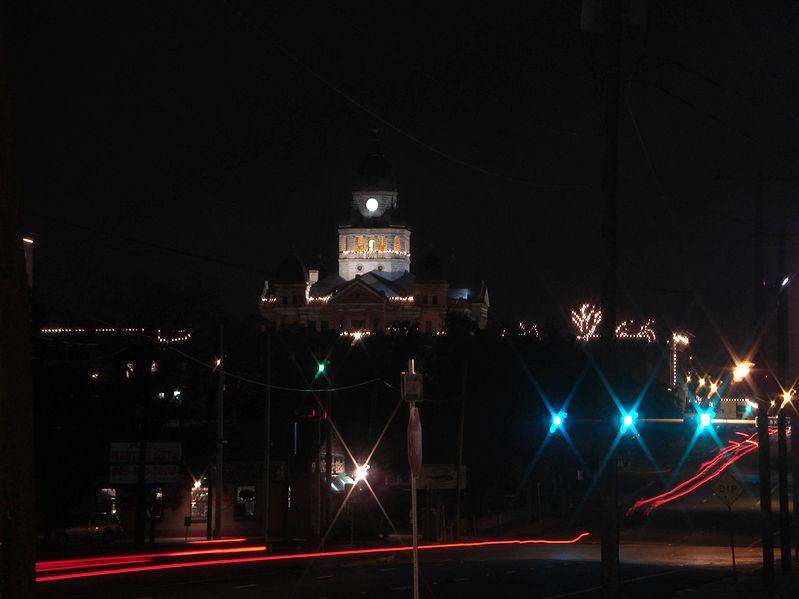 It’d be possible to spend countless hours talking about why Denton’s music scene is exceptional—the openness to amateurs, the DIY attitude, the high talent density of the town’s population. But the best way to understand what makes Denton special is to just spend a Saturday night there. So that’s what I did.

It’s August 11th. I’m in Denton on a Saturday night with Adam Holmes, my best friend from high school. The drive here is gorgeous—a two-lane farm-to-market road that meanders through 400-person towns and sprawling cow pastures.

We meet up with our friend Nick Rothouse, a percussion student at the University of North Texas who is also in Denton for the evening. Adam and I catch up with Nick over noodles at Ramen Republic, a mom-and-pop fast casual diner just off the square.

We start our evening at Banter, a small club on Oak Street. We splay ourselves on big leather couches under a corrugated-steel ceiling. The evening’s opening act is a blues outfit called Baloney Moon. None of the quintet’s members are under fifty years old. They’re playing on the stage of a venue that can’t be bigger than 6 feet by 10 feet.

And they are really good. The lead singer looks as though she could’ve been my first-grade teacher but she has the voice and the stage presence of a slightly less bombastic Wynonna Judd. At one point, she makes eye contact with me, breaks into a huge smile, and gives a little shimmy as she positively belts out one of the set’s most energetic songs.

She’s backed up by rhythm instrumentalists who clearly know what they’re doing; holding back to pull the small but rapt audience in before throwing down just enough to keep things interesting—but too much to elicit scoffs.

From where we’re sitting, we can see the street through Banter’s big glass windows. A young couple, dressed in formal clothes, is dancing outside in the fading sunlight, the man twirling the woman in time to Baloney Moon’s whiskey-slick twelve-bar blues.

From Banter, Adam, Nick and I head east on Oak Street to J&J’s Pizza, one of the Square’s mainstays. Upstairs, it’s a standard pizza joint. Downstairs, it’s a small, shamelessly dingy concert space, with a claustrophobic low ceiling and just enough floor space to make you uncomfortable at crowded shows.

We walk down the crooked staircase to a small crowd and a tall, muscular African-American man gyrating against the microphone. There’s a portrait of what I’m pretty sure is the Virgin Mary hanging behind the band, The Gypsy Hideout.

They mostly play energetic jazz-fusion songs with lyrics mostly about sex. The lead singer is mesmerizing, dancing seductively around the tiny venue, and ripping open his vest. It’s an energy unfortunately undeserved by the small space and sparse crowd. But we still have fun.

The three of us emerge from J&J’s and continue east on Oak Street. We stop by Andy’s Bar, where I interviewed Cameron Neal in my last article, but tonight there’s a fairly steep cover and we don’t recognize any of the names. So we take a right and head south on Locust Street.

On the lawn in front of the town’s courthouse, the centerpiece of Denton Square, there’s a circle of folk musicians playing instrumental tunes. Not one of them looks under seventy. We stand there and watch for a few minutes. Other people stop and watch too.

From the courthouse, we head off the square, onto Hickory Street. Our destination is a bar called Dan’s Silverleaf—one of Denton’s premiere venues.

We pay the cover, but as we have arrived in between sets, the three of us head outside to the patio. It’s an unnaturally cool evening for August in Texas (read: below 90 degrees), and plenty of people, most of them in their mid-twenties, are outside smoking, drinking, and enjoying each other’s company.

After about thirty minutes, we head back inside to watch Spooky Folk perform. They’re pretty well known around town, and their unpretentious, blaring, baroque-folk sound lends itself well to incredible live shows.

“Bible Belt” is a tongue-in-cheek account about growing up in an oppressively religious community—which, well, aren’t particularly in short supply around these parts. “I was born on the Bible Belt / give me something sharp so I can kill myself,” sings the whole band in the song’s foot-pounding chorus. “‘Cause I can’t go on living this way / even though my momma says, well, get down on your knees and pray!”

The crowd loves it. They cheer, they whistle, they clap, but it’s never disproportionate to the energy of the band. That’s another important thing about Denton: It’s a town of not only talented musicians but also keen and knowledgeable music appreciators. Both elements are part of what makes the music culture so vibrant and so consistently brilliant.

As we walk back up Hickory Street, we pass the courthouse again. This time, there’s a circle of people playing percussion instruments of various types. The people, too, are diverse—some old, some young, some who look like trained percussionists and some who look like they’ve never touched a drum in their life.

In front of the circle sits a pile of percussion instruments and a sign: “Yes! You may borrow a drum. Or, feel free to dance!”

As the sound of a classical violinist busking across the street floats to me through the warm air, it occurs to me that this sign captures Denton pretty well. Sure, the town has its established acts and its micro-scenes. And if you want to make it, you obviously have to be good. But outside of that, there really aren’t any rules. In such a small town, with such a dedicated group of listeners who recognize that they have something special here, there’s nothing stopping anyone from picking up a drum—or a guitar, or a keyboard, or a microphone—and joining in.