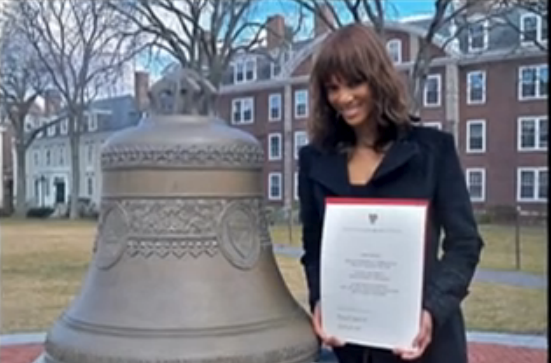 Tyra Banks showing off her dipl—certificate from Harvard Business School

"It hit me after graduating from Harvard," Tyra Banks explained in the opening sequence of America's Next Top Model's 19th cycle this summer. "We just have to do a college cycle!"

To be clear, Tyra did not attend the College, though her feisty sidekick in that opening scene is quick to compliment her "big, fierce, Harvard College ideas!" Since "graduating" from Harvard Business School last February (in fact, Banks received a certificate from Harvard's Owner/President Management Program, a nine-week program featuring an application which asks prospective participants for their annual compensations but does not inquire about GPAs or test scores) Banks has not missed a single opportunity to drop the H-Bomb, reminding the world time and time again of all that deliberately-assigned hard work she had to put in.

And yet, as Jezebel's Jenna Sauers boldly explained, Tyra Banks does not have any kind of Harvard degree at all.

Still, most of Tyra's minions are willing to brush this technicality aside if it means they can invoke Harvard in reference to her. In the most recently aired episode of ANTM, contestant Maria Tucker, who received a master's degree last spring from Harvard Divinity School, decided that modeling was not for her and chose to withdraw from the competition. In a heart-to-heart with stylist-to-the-stars Johnny Wujek, Wujek encouraged Tucker to stick it out for Tyra's sake. "Tyra's a big fan," he told Tucker. "You're a Harvard girl!"

After all, Tyra should know all about Harvard girls. As she explained on Good Morning America, her forced 3-week stay in HBS dorms ("When they told me that I'd have to be in the dorms, I was like, wait, there's a hotel two blocks away. Can I stay there?") helped her connect with her classmates. "I have bonded with these people," Banks stated. And since Harvard is really just one big undifferentiated pajama party of studying people held captive in their dorms, it's entirely possible she roomed with Tucker herself.