Frank Says He Wants To Serve as Interim Senator 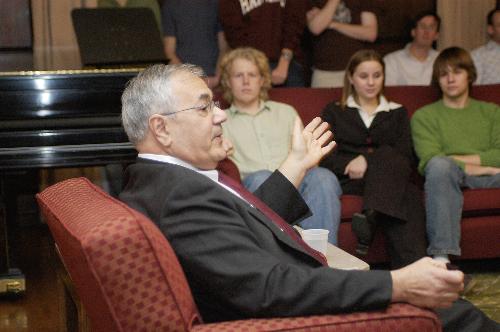 Congressman Barney Frank ’62 (D-MA) speaks to students in the Eliot Junior Common Room yesterday at an event sponsored by the Harvard College Democrats.

Former Congressman Barnett "Barney" Frank '61-'62, who just retired from politics after representing Massachusetts’ Fourth District on Capitol Hill for 32 years, wants back in.

Speaking on the MSNBC show Morning Joe Friday morning, Frank said he had called Governor Deval L. Patrick '78 to ask for a chance to serve as interim replacement to Massachusetts Senator John Kerry, whom Obama has nominated as Secretary of State. Kerry is expected to be confirmed easily by the Senate.

Frank, who made financial reform his top priority during his final years as a Congressman, was blunt during the interview in his explanation for why he wants the Senate position.

"A few weeks ago, I said I wasn't interested. It was kind of like, you're about to graduate and they said, 'you've got to go to summer school.' But that [fiscal cliff] deal now means that February, March, and April are going to be among the most important months in American financial history," Frank told the MSNBC anchors.

"Congressman Frank is a really gifted legislator, and he'd be a great Senator," Patrick said.

Patrick likely will not name an interim replacement until after Kerry is confirmed. Massachusetts will then hold a special election as early as June to select a permanent replacement to fulfill the remainder of Kerry’s term.

Not only did both Frank and Patrick graduate from the College, but they also each hold a degree from Harvard Law School. If appointed, Frank would join a growing Harvard contingent in the Senate, which includes former Law School professor Elizabeth Warren and six graduates of the College.

Patrick is said to be considering numerous other candidates to replace Kerry, among them Vicki Kennedy, widow of longtime Senator Edward M. Kennedy '54-'56.