Final Clubs Through the Decades 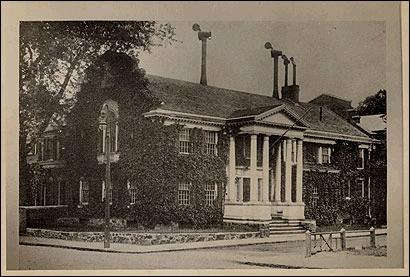 With punch season now in full swing, it’s time to present the results of Flyby’s first-ever Final Club Survey. The online survey was emailed out last month to 4,838 sophomores, juniors, and seniors, and was partially or fully completed 1,927 times (though it should be noted that individuals could have taken the survey more than once). In the fourth installment of a six-part series, we've decided to take a break from reporting on our results to share with you a compilation of some Crimson-reported snippets from the past eight decades of the final clubs' storied history.

September 30, 1932: October 21 Will Be Initial Date for Club Pledging of Sophomores

The regulations governing activities of clubs this fall in regard to canvassing Freshman and pledging Sophomores were announced recently by the Graduate Advisory Committee.

Since 1914 the undergraduate clubs have agreed that their members will not canvass members of the Freshman class and that they will not elect any undergraduate before the fourth Monday after the opening of College in his Sophomore year, and that no pledge or promise from any Sophomore shall be accepted before the Friday following the fourth Monday.

The newly approved Sphinx Club may be obliged to change its name if the Phoenix S. K. Club has its way. According to Edward C. Wilson, Jr. '49, president of the Phoenix, the name "Sphinx" is the name of a club already in existence.

In reply to Wilson's charge John K. Lally '49, one of the founders of the brand new club and "graduate adviser" said, "We are bigger than the Phoenix and I think we can take care of ourselves."

Lally also claimed credit for inventing the name of the new society.

November 22, 1958: The Final Clubs: Little Bastions of Society in a University World that No Longer Cares

In Chestnut Hill, a girl at a debutante party used her stock conversational opener with a new dancing partner: "So you go to Harvard. What Club are you in?" In Cambridge, an undergraduate wishing to contact the Harvard Flying Club was surpised and a bit mystified when the voice at the other end of the telephone told him politely that the Fly Club had nothing to with airplanes.

These are the two distinct worlds of which Harvard's Final Clubs find themselves a part. One is the world of Society, whose population is found largely on the pages of East Coast Social Registers and whose habitat lies far beyond the borders of Cambridge 38. Here Harvard is often equated with the Clubs, and a father tends to measure his son's college success not by the rank of his degree, but by the prominence of the Club he makes.

The other world is the University itself, where a rather obvious curtain of silence hangs around the attractive brick buildings, centered on Mt. Auburn St., which house the Final Clubs. This is a world where few undergraduates know much about the Clubs, and even fewer care.

June 16, 1966: College's Final Clubs Enjoy Secluded Life In a World that Pays Little Attention to Them

When a newly initiated member of the Porcellian Club complained last year that sitting in a leather chair and singing praises to the walls was not the stimulating experience he had expected from club life, Theodore Roosevelt IV, '65 let him in on a bit of Porcellian philosophy. "We may be passive," Roosevelt said, "but we're aggressively passive."

Eight women dressed in suitcoats and ties entered the punching party of the Delta Upsilon (D.U.) final club Sunday in an effort to sexually integrate the traditionally all-male bastion.

Stewart Shofner '79 and Stephen A. Kowal '79, club members, gathered eight of their female friends and nominated or "punched" them for membership in the club under male pseudonyms.

Shofner said yesterday they punched the women in an effort to expose the sexism of the traditional all-male membership and to test the reaction of the club members.

The student-faculty Committee on College Life yesterday outlined a compromise resolution on the College's ties to final clubs. They will vote on the proposal in an upcoming meeting.

The resolution calls for the severing of all ties between the College and the private, all-male social clubs, which have refused to adopt a non-discrimination policy required of all recognized student organizations.

Under the terms of the resolution, these clubs would be asked to pay "a surcharge above and beyond costs for all services rendered by the University or its agents."

The graduate board presidents of Harvard's eight final clubs voted unanimously this summer—as part of sweeping reforms in the clubs' guest and alcohol policies—to ban beer kegs at all club buildings.

At the July 3 meeting, the graduate board presidents, known collectively as the Inter-Club Graduate Council, also agreed to limit each club member to two guests at all times except parties, to require members to register visitors and to hold members responsible for the behavior and safety of their visitors.

Each club party, which is defined as a gathering that exceeds the two-guests-per-member policy, must now be approved in advance by the club's graduate board president.

March 18, 1995: Final Club Closed After Recruit is Beaten in Fight

A high school senior recruited for the Varsity football team was severely beaten in a fight with a team player at the D.U. final club a month ago, the recruit and other players said yesterday.

Louis I. Kane '53, the president of the D.U.'s graduate board, said even after the club reopens, it will shut down at 10 p.m. on Friday and Saturday nights for the remainder of the academic year.

A website containing an archive of internal e-mails, publicly accessible until it was discovered by The Crimson late last week, provides a rare glimpse into the secretive Harvard final club scene—and a portrait of a five-year-old all-female club struggling to find a place within it.

The e-mails, which contained details about the day-to-day operations of the Isis Club, were posted on a website that was publicly available because club officers apparently failed to activate a setting that would have closed it to non-members, according to Matthew A. Gline ’06, president of the Harvard Computer Society (HCS), which hosts the e-mail list.

In e-mail exchanges that were compiled on the website, the club members posted judgments about females seeking entrance, disclosed their decision to enact an informal détente with the all-female Bee Club, and revealed their reliance on male clubs for social space.