The 10 Types of Girls You Meet at Harvard 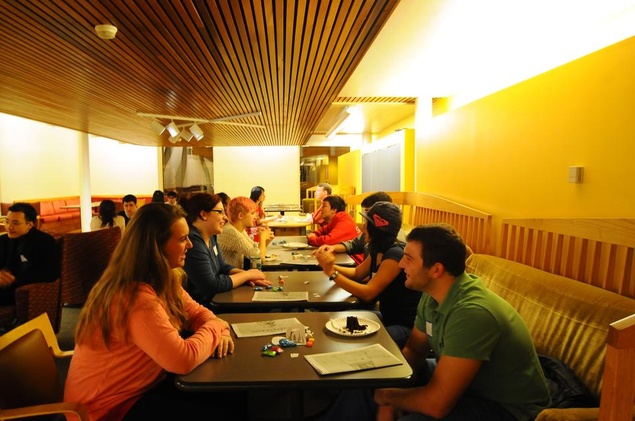 There are plenty of different types of girls at Harvard, and sometimes it can be overwhelming to remember them all. We've decided to help everyone out. Using a complex process of taxonomy, we have identified ten major categories of girls that you might run into in the next couple of years.

1. The Lamonster
Tough luck if this is the girl of your dreams. She spends over 23 hours a day in the dark depths of the library, only venturing out to feast on Annenberg prey (chicken and squash). You may see this committed student once every full moon. Although she may be appealing in an unconventional way, she’s probably more in love with her Math 55 textbook than she is with you. She may be wonderful, but she has very clear priorities, and finding love is not at the top of the list.

2. The Secret Studier
A distant relative of the Lamonster, this species of girl has come to hide her obsessive study habits. She makes college look effortless and it may seem like she has it all—the parties, the grades, the extracurriculars, and, most elusively, the sleep—but beware. The “five minutes” she put in for her big midterm may have been closer to five hours.

3. The Girl from “The City”
You can spot this girl from a mile away. She is attractive, fashionable, and has a little bit of an edge that you may find appealing. She travels in the same pack she did in high school and is rarely without companions from The Big Apple. If you don’t have a New York driver’s license, your chances with this girl are greatly diminished.

4. The Hipster Chick
Fully equipped with the glasses, the boots, and the skinny jeans, this girl missed her true calling at Brown or NYU. She rejects American consumerism, reads Jack Kerouac, and prefers to talk about bands that you have never heard of. If pressed, of course, she’ll never admit that she’s a hipster. She may find true love with another hipster, but then again she may also find love with a football player. It’s all about being non-conformist.

5. The Activist
You’ll find this girl protesting outside the Dean’s room or handing out flyers on Mass Ave. She cares more about causes than classes and wouldn’t be caught dead using a non-biodegradable napkin. She’s the most likely to change the world for the better, so it wouldn’t hurt to be her friend. But if you drive a Hummer, chances are you’re out of luck.

6. The Facebook Celebrity
You know this girl’s name even though you’ve never seen her in real life. Before coming to school it seemed she would be a dominant force, a social juggernaut. She may have even caught your attention with her prom pics (yeah, we know you looked). Her excitement was uncontainable on the Web, but she is rarely seen in the flesh. If you’re interested, try establishing contact via an old school poke war—she feels more comfortable in her native cyber environment.

7. The Athlete
Generally good looking and almost always fit, this girl may catch your attention early on. She travels to Dartmouth on the weekends and goes to bed early most nights. If you're not a member of a varsity team it may be hard to catch up with her because she’s always at practice. Non-athlete suitors may have to wait for the offseason to begin courtship.

8. The Super A-Type
It’s hard to chat with this girl. Not because she’s hiding but because she’s perpetually running to a different club or section. She’s involved in 30 different programs at PBHA, is already a Senior Fellow at the Kennedy School, and has her sights set on the White House.

9. The International
The accent makes her sound so smart. And so sexy. Hailing from some far corner of the globe—or just Canada—this girl has made a huge transition to life in the States. All things considered, she has adapted very well, but occasionally is still shocked by American culture. If you want to get her attention, pick up Rosetta Stone and really impress her.

10. The One You Fall In Love With
Maybe she caught your attention during Opening Days. Maybe she started out as a friend and your little crush has turned into something bigger. You like this girl more than you want to and it's scary.