Harvard-Yale: Somehow, It Always Gets Weirder 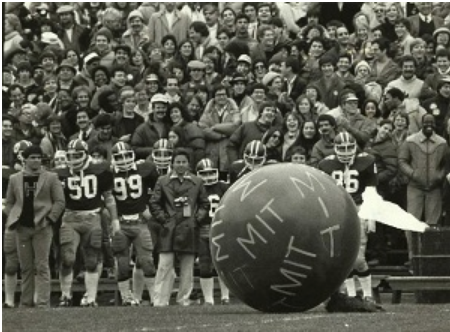 MIT, in a desperate attempt to feel included, pulled off a weather-balloon scale prank in 1982. By Timothy W. Plass

Harvard-Yale szn is back again and we’re already hype for all the game day festivities. If you’re anything like us, you know that watching the weird things that happen around game time is even more fun than the game itself, whether that be the latest Harvard-Yale pranks, the most wild tailgaters, or the best signs in the stands. What better way to prepare for all this inevitable craziness than with a look at some of the weirdest things to happen at past games?

With Yale having won nearly every single match leading up to the 1908 game, the pressure was on for Harvard to finally make a comeback. Legend has it, the football coach at the time strangled a papier-mâché bulldog and drove around Cambridge with it attached to his car to raise morale and get the team ready for The Game. Some even say that he actually strangled a live bulldog, but we’re gonna assume that this one at least is a little too weird to be true.

Forget the weekly trek back to your dorm from Pfoho Igloo; in 1962, Harvard took late night entertainment to a new level with a band parade through New Haven – at 4 a.m. Sure the police and locals weren’t too happy (er, seven band members were tossed in jail), but what better way to get ready for a game day win! We can only hope that this night also ended with a midnight snack at some Jefe’s equivalent. After the members made bail, of course.

Taking L’s… Even from the Team Manager

If you’ve seen any CEB poster you already know this game is all about “Payback Time” after a two-year Yale winning streak, but this was not the case in 1952. With Yale ahead by nearly 25 points, they decided to add insult to injury and put in their student team manager to catch a two-point conversion on Harvard’s own turf. Let’s just cross our fingers we don’t get a repeat of that this Saturday.

MIT Joins the Party (...for some reason)

As tensions grew between Harvard and Yale for the 1982 Game, MIT apparently felt left out and decided to join in on the fun. In what they like to call one of their most iconic “hacks” (because of course that’s what MIT would call pranks), halfway through the game a giant weather balloon with “MIT” written on it rose out of the ground and popped, leaving powder all over the field and anyone nearby. With many newspaper articles declaring that they stole the show, and even a press conference proclaiming this the “the greatest college prank of all time,” we’re glad MIT got to feel included.

After seeing some of the weirdest things to happen at past Harvard-Yale games, maybe your moderately-impaired decisions on gameday will seem a little less crazy. Though let’s be real, the consistently weirdest thing about The Game must be the Yale students. Imagine choosing to wear Yale Blue over Harvard Crimson.