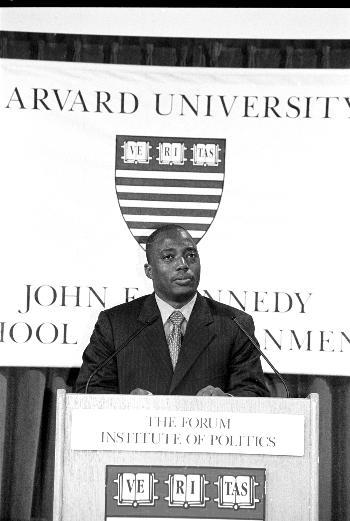 Introduced at the ARCO Forum as the youngest head of state to ever speak at the Institute of Politics, 30-year-old Joseph Kabila, the president of the Democratic Republic of the Congo, outlined his optimistic plan for the future of his impoverished and war-torn country, calling for peace before democracy can be established.

“No country can truly hold free and fair elections with external forces on all sides,” he said.

Since 1998, the Democratic Republic of the Congo has been fighting a civil war with rebels who are supported by the surrounding countries of Rwanda, Uganda and Burundi.

“I call on the parties involved in the conflict to respect the true wishes of the people of the Congo,” Kabila said. He charged the three nations with violating the United Nations charter for their invasion of the northern and eastern portions of the Congo.

Kabila said the Congo’s troubles stem back to the days of Belgian imperialism, when the needs of the people were neglected while the land was stripped of its rich natural resources. The country received its independence in 1960, but fell into chaos and then dictatorship under Mobutu Sese-Seko.

In 1997, a rebellion led by Kabila’s father, Laurent Kabila, forced Sese-Seko out of office. He died later that year in exile. By the time he died, Sese-Seko was one of the wealthiest men in the world, though the Congo remained one of the poorest of countries, according to per capita income.

“We inherited a political climate that had been brutalized,” Kabila said, while discussing the difficulties of effective reform during war times.

Kabila came to power this past January after his father was assassinated. Despite the war, Kabila said he is committed to the protection of fundamental rights and spoke of the need for democratic changes.

“A nation where people’s freedom is not guaranteed cannot develop to its full potential,” he said. In addition, Kabila outlined goals for making full use of the country’s natural resources to improve the economy, and said he planned to continue efforts to slow “run-away inflation.”

The speech was followed by an hour question and answer session, in which Kabila spoke about diverse issues from AIDS to the political role of women to his personal feelings on living in constant fear of assassination.

Many audience members were struck by Kabila’s frank and honest approach to answering questions.

“I could really identify with his idealism and hopes, the way a lot of young people here in the United States probably can,” said Clay Pell ’05.