Council Hopefuls Face Off in Debate 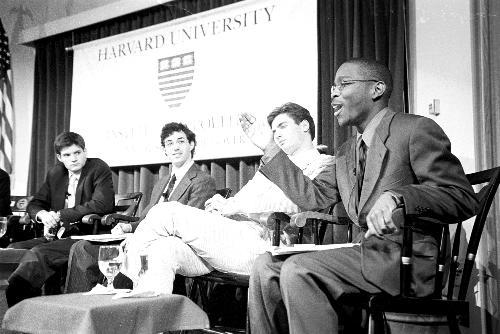 Elections for the Undergraduate Council president and vice president began this morning at 12:01 a.m., following a debate yesterday among all the presidential candidates that elicited both hisses and laughs from the audience.

The debate, which drew about 100 people to the Kennedy School of Government’s ARCO Forum, provided an opportunity for audience members, panelists and the candidates themselves to ask questions.

The five presidential candidates first fielded questions from a panel comprised of members of the two organizations that co-sponsored the event, the Harvard Political Union and The Crimson.

Darst led off by saying that representation by the council president should “include more service in dining halls, more going door-to-door.”

Chopra, a council veteran, spent much of his speech time throughout the debate criticizing the council.

Smith said the council needs to serve as an effective lobbying group, and that passing “broad legislation” did not fulfill its obligations.

Lurie drew on a theme of the “lack of respect” for the council.

“We waste their money on things we think are good,” he said, stating his belief that good potential council representatives decide not to run for council office because they don’t respect the organization.

Maats, wearing a blue seersucker suit and pink bow tie, said that “nobody’s behind” the council, and that a sense of humor is the way “to get people excited and get people jazzed.”

Darst emphasized the importance of social events, saying that “they mean a lot to students.” He stressed the importance of cooperation between the council and House Committees, involving University President Lawrence H. Summers in student groups’ initiatives and soliciting funds from non-University sources.

“These are alternative resources that we have,” he said.

Chopra said the council would have to work with the administration in order to implement many changes, and that finding Faculty members who support the council’s causes would be important.

“Harvard is being run by low-level bureaucrats,” Chopra said, later adding that the council should attempt to appeal to “really angry faculty members rising up.”

Chopra also said the council must focus on student services in order to regain respect from students, work to restructure the Core program and centralize the process for student groups to get grants.

Smith pounded home his top campaign issues—expanding Crimson Cash to local restaurants, increasing the number of courses that would count for Core credit, pairing first-year students with graduate student mentors to improve advising and creating an ad hoc committee to examine the Ad Board and its sexual harassment policies.

The real contention in the debate stemmed from pointed questions and comments made by Smith, Chopra and Lurie.

When candidates were allowed to ask each other one question, Chopra asked Smith about how to improve Faculty diversity, which was one of Smith’s key campaign planks.

After Smith advocated implementing a mentorship program for minority and women faculty, Chopra spent his rebuttal time saying that this step has already been taken, with little success.

Smith asked Chopra about how to make the council’s committees accessible to the wider community, and Chopra responded that the meetings of the council’s Student Affairs Committee (SAC)—of which Chopra is chair—were always open.

Smith replied, “When I tried very hard to get on the e-mail list for SAC, I was denied.”

Lurie also took a jab at Darst, asking a question about the Fox final club and saying that instances of sexual assault had been connected to it. Lurie pointed out that Darst is a prospective member of the Fox.

Darst condemned sexual assault and said he’s in favor of prosecuting all instances of the crime.

In the final segment of the debate, when the vice-presidential candidates had the opportunity to speak before their running-mates delivered closing statements, more contention arose.

Chopra concluded his own speech by defending his experience.

“If anyone wants to attack my own record, feel free, because if the truth comes out, you’ll be embarrassed,” Chopra said, adding later that “I have never once voted to cut student group funding.”

Finance Committee Chair Jessica P. Lau ’04 said the budget Chopra voted to approve at the beginning of the year “did not have any decrease whatsoever in the percentage of money going to the grants fund.”

Each student group received less money because the same percentage of the budget was split among more groups.

“You have to talk about those types of things,” Smith said. “I think it’s completely in bounds. I think it’s wrong to attack people personally.”

After agreeing on multiple issues, Lurie and Maats told each other, “Maybe I should vote for you.”

To the amusement of audience members, Lurie criticized the House system by noting his inability to see “some really really good-looking girls in Quincy,” while Maats opposed preregistration on the grounds that professors “have an easy job already.”

Many campus groups and prominent individuals have endorsed candidates.

Chopra and his running-mate, Jessica R. Stannard-Friel ’04, have officially received the support of the council’s First Year Social Committee, the Environmental Action Committee, the Radcliffe Union of Students, the Harvard AIDS Coalition, the liberal Perspective magazine and the Bisexual, Gay, Lesbian, Transgender and Supporters’ Alliance (BGLTSA).

Chopra received the nod from BGLTSA even though Smith had served as the organization’s co-chair.

Smith received an endorsement from the Black Students Association, of which he is vice president, while his running-mate Chapa received approval from the Jews for Conservative Politics, as well as the Harvard Republican Club, of which he is an executive.

Smith and Chapa together received endorsements from Harvard Committee on Security Studies, the Harvard Collective, the Hispanic Scholars Society and the Native Americans at Harvard Association.

According to Darst’s campaign coordinators, he has received nods from Girlspot, Social Good Through Politics, the Coalition Against Sexual Violence and, in a split endorsement with Chopra, the Environmental Action Committee.

—Staff writer Alexander J. Blenkinsopp can be reached at blenkins@fas.harvard.edu.