A Challenge to House Master Hanson 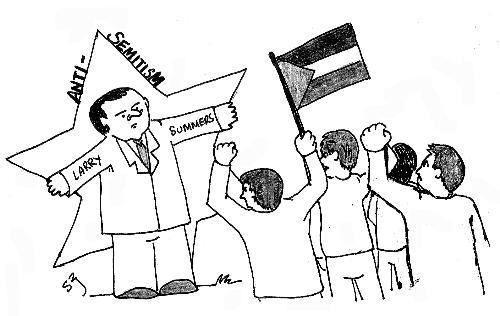 In my 38 years of teaching at Harvard Law School, I don’t recall ever writing in praise of any action by a Harvard president, but this time I must congratulate President Lawrence H. Summers for his willingness to say out loud what many of us in the Harvard community have long believed: namely, that singling out Israel, among all the countries in the world, for divestment, is an action which is anti-Semitic in effect, if not in intent. A recent open letter by one of the signatories made it clear that he regards Israel as the “pariah” state, a word historically used by anti-Semites to characterize the Jewish people.

As an advocate and practitioner of human rights throughout the world, I can confidently assert that Israel’s record on human rights is among the best, especially among nations that have confronted comparable threats. Though far from perfect, Israel has shown extraordinary concern for avoiding civilian casualties in its half-century effort to protect its civilians from terrorism. Jordan killed more Palestinians in a single month than Israel has between 1948 and the present.

Israel has the only independent judiciary in the entire Middle East. Its Supreme Court, one of the most highly regarded in the world, is the only court in the Middle East from which an Arab or a Muslim can expect justice, as many have found in winning dozens of victories against the Israeli government, the Israeli military and individual Israeli citizens. There is no more important component in the protection of human rights and civil liberties than an independent judiciary willing to stand up to its own government. I challenge the proponents of divestment to name a court in any Arab or Muslim country that is comparable to the Israeli Supreme Court.

Israel is the only country in the region that has virtually unlimited freedom of speech. Any person in Israel whether Jewish, Muslim or Christian can criticize the Israeli government and its leaders. No citizen of any other Middle Eastern or Muslim state can do that without fear of imprisonment or death.

Israel is the only country that has openly confronted the difficult issue of protecting the civil liberties of the ticking bomb terrorist. The Israeli Supreme Court recently ruled that despite the potential benefits of employing non-lethal torture to extract information, the tactic is illegal. Brutal torture, including lethal torture, is commonplace in nearly every other Middle Eastern and Muslim country. Indeed, American authorities sometimes send suspects to Egypt, Jordan and the Philippines precisely because they know that they will be tortured in those countries.

Nor is Israel the only country that is occupying lands claimed by others. China, Russia, Turkey, Iraq, Spain, France and numerous other countries control not only land, but people who seek independence. Indeed, among these countries Israel is the only one that has offered statehood, first in 1948 when the Palestinians rejected the UN partition which would have given them a large, independent state and chose instead to invade Israel. Again in the year 2000 Palestinians were offered a state, rejected it and employed terrorism.

There are, of course, difficult issues to be resolved in the Middle East. These include the future of the settlements, the establishment of Palestinian self-governance and the prevention of terrorism. These issues will require compromise on all sides. Members of the Harvard community must be free to criticize Israel when they disagree with its policies or actions, as they criticize any other country in the world whose record is not perfect. But to single out the Jewish state of Israel, as if it were the worst human rights offender, is bigotry pure and simple. It would be comparable to singling out a black nation for de-legitimation without mentioning worse abuses by white nations. Those who sign the divestment petition should be ashamed of themselves. If they are not, it is up to others to shame them.

Among those who signed this immoral petition was Winthrop House Master Paul Hanson.

I wrote to Prof. Hanson challenging him to debate me in the Common Room of Winthrop House about his decision to sign the petition. He refused, citing “other priorities.” I can imagine few priorities more pressing than to justify to his students why he is willing to single out Israel for special criticism. Accordingly, I hereby request an invitation from the students of Winthrop House to conduct such a debate, either with Hanson present or with an empty chair on which the petition which he signed would be featured.

Universities should encourage widespread debate and discussion about divisive and controversial issues. A House master who peremptorily signs a petition and then hides behind “other priorities” does not serve the interests of dialogue and education. I hope that Hanson will accept my challenge, and that if he does not, that I will be invited by his students to help fill the educational gap left by the cowardice of those who have signed this petition and refuse to defend their actions in public debate.

Let me propose an alternative to singling out Israel for divestment: let Harvard choose nations for investment in the order of the human rights records. If that were done, investment in Israel would increase dramatically, while investments in Saudi Arabia, Egypt, Jordan, Philippines, Indonesia, the Palestinian Authority and most other countries of the world would decrease markedly.