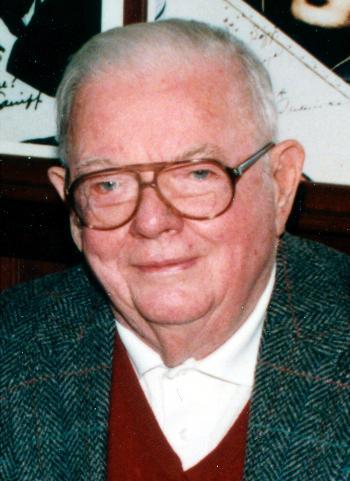 William T. “Will” Cloney ’33, long-time director of the Boston Marathon and supporter of Harvard athletics died in Duxbury, Mass. Thursday. He was 91.

Cloney was the director of the Boston Marathon from 1946 until 1982 and an avid fan of Harvard football since his 10th birthday, when he attended his first game—the legendary 6-0 loss to Centre College that snapped the Crimson’s 25-game winning streak.

Cloney was an honorary member of the Varsity Club, an organization whose membership is usually restricted to current and former varsity athletes. He co-founded the club’s newsletter, News & Views, in 1958, which now publishes 15 times annually.

The writers’ section of the Harvard Stadium pressbox was dedicated to Cloney in 1993. Until the mid-1990s, he climbed the 123 steps for every home game.

In recent years, declining health had forced Cloney to stay home—a reality that disappointed him.

“Those 123 steps to the pressbox are just too tough. And I miss being at the games. A lot. But I’m certainly there in spirit and listen faithfully to just about every game broadcast. I’m furious if I miss a broadcast and have to wait until the 11 o’clock news to find out whether Harvard won,” he said in the October 2001 issue of News & Views.

Cloney began a career in sports journalism when he was 17, covering Harvard football for the Boston Herald while attending Harvard. Cloney continued to work for the Herald until 1953, when he began writing for the Boston Post.

In 1935, while still working at the Herald, Cloney earned a master’s in education at Harvard. He went on to teach journalism at Northeastern University from 1947 to 1953.

Cloney is internationally famous for his tenure at the Boston Athletic Association (BAA), where he was president from 1964 to 1982 and directed the Boston Marathon from 1947 to 1982. Under his guidance, the marathon grew from a minor event that ran a deficit into one of the world’s premier marathons.

Cloney left an indelible impression on the Boston Marathon, according to those who lead it today.

“He helped shepherd the organization and the marathon through years of change and growth while striving to maintain the integrity of both the organization and its events. Mr. Cloney’s vision for the BAA Marathon was progressive in that he viewed it as a community-wide event which other marathons would come to emulate,” Guy Morse, the current BAA director, said in a written statement.

Cloney is remembered for backing many of the marathon’s quirky traditions—such as the noon start time and the beef stew served at the finish.

Joseph D. Bertagna ’73, who first met Cloney while playing hockey at Harvard and later helped him with News & Views, remembered him for his “dry wit” and having “a good way of stating his opinion without belittling other peoples’ opinions.”

Bertagna said even when Cloney was wearing his journalist hat, his fierce loyalty to Harvard shined through.

When Bertagna took Cloney’s usual role writing the football story and criticized the Crimson’s “sloppy tackling” in a game against Princeton, Cloney corrected him—it was not Harvard’s tackling but Princeton’s “elusive running.”

“But there was a wink in his eye,” Bertagna said.

Later, Bertagna knew Cloney through the Varsity Club’s Hall of Fame Committee. Cloney continued coming to the meetings until two months before his death.

Bertagna recalled how Cloney was able to keep a level tone despite the heated nature of the conversations over whom to honor.

“He was a walking historical factbook of Harvard athletics,” said Bob A. Glatz ’88.

A funeral mass was held Monday at Holy Family church in Duxbury. Cloney is survived by his wife Arline and two children.

—Staff writer Andrew C. Campbell can be reached at acampbel@fas.harvard.edu.