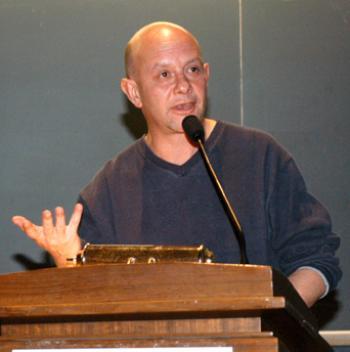 Author Nick Hornby, whose books High Fidelity and About a Boy have recently met with silver screen success, read from his new novel-in-progress for the first time last night as part of visiting lecturer Zadie Smith’s Writers’ Season.

Hornby moonlights as a pop music critic for The New Yorker, and his books often revolve around love, humor and music.

Reading from a novel tentatively titled Kings and Queens of Shambles, Hornby told the story of three people who meet when they’re all trying to kill themselves by jumping from the same roof.

“Out of the way, losers!” yells Jess, as she charges the other two characters already occupying the prime suicide spot.

Hornby’s novels often use humor to deal with serious issues—as he puts it, he writes “in a funny tone about sad things.”

“The comic novels I like always have some bottom,” Hornby said.

“Why is [committing suicide] the biggest sin of all?” wonders one of the characters in the selection. “I can see that it’s a sort of queue-jumping. But if you jump in a queue, people tut, they don’t say, ‘You’re going to burn in hellfire for all eternity!’”

More than a hundred students came to the reading, held in the Science Center. Afterwards, Hornby fielded questions about his writing, favorite songs and opinions on British and American literature.

“Anybody who writes fiction has ideas—most are rubbish, but every now and then you think of something that will allow you to do what you want to do,” Hornby said.

Smith is teaching a class on 20th century literature at Harvard this semester in addition to a fiction writing class.

She wrote in an e-mail that the speakers for her Writers’ Season series do not visit her classes, but they are chosen with her curriculum in mind.

“Their readings are timed so as to fit in with the theme of the class the day before; so Nick Hornby comes at a time when we are discussing the English comic novel, for example,” Smith wrote.

According to Smith, the lecture series will continue with Matthew Klam, author of Sam the Cat, and Alexander Hemon, author of Nowhere Man, which was nominated for the National Book Critics’ Circle Award this year.

The lectures, which kicked off this fall with readings by such rising literary stars as Jonathan Safran Foer and David Eggers, were “a one-time opportunity,” according to Chair of the English department Lawrence Buell.

Buell said the chance to bring Smith—whose books White Teeth and Autograph Man have been critically-acclaimed bestsellers—to the department as a visiting lecturer came only because she was a Radcliffe Fellow last year.

Tickets were originally required for the Hornby reading, but the policy was reversed yesterday in an e-mail from the department’s Coordinator of Undergraduate Studies Mary C. Johnson announcing that “we are opening Nick Hornby’s reading to everyone.”

“As far as the limitations are concerned, we wanted to give some advantages to English concentrators, given that the courses [Smith] is teaching are limited in enrollment, and we have increasing numbers of students for whom writing is a strong interest,” Buell said. “As an English department who’s her host, we should support our students.”

The English department has been struggling to satisfy demand for its popular creative writing courses, and Buell said Smith was “the key differential factor” in accommodating that demand this year.

“By design we are better off in our ability to supply workshops than we were several years ago, but we aren’t yet at the utopian state where supply and demand are in balance,” Buell said.

—Staff Writer Benjamin A. Black can be reached at bblack@fas.harvard.edu.