With a Streak of Pranks, Final Club Initiations Begin 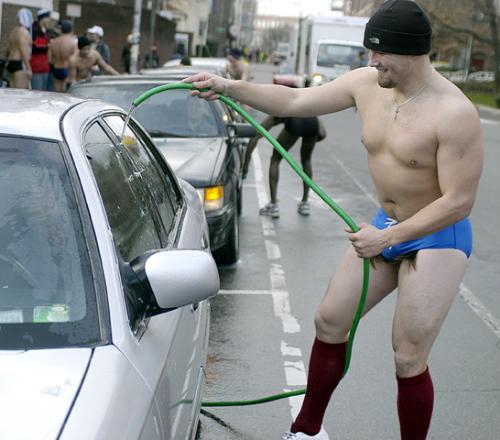 A student being initiated into the Phoenix Club washes a car on Mount Auburn Street yesterday. The club required new members to wash cars in Speedo’s despite the brisk December breeze.
By Faryl Ury, Crimson Staff Writer

Outrageous incidents like these marked the kick-off of initiations for Harvard’s male and female final clubs and at least one fraternity.

While the antics are adding a touch of color to the gray days of December, some students and professors view them as offensive and disruptive.

New final club members, mostly sophomores, were notified of their selection before Thanksgiving break, but most are not considered official members until they endure an integration process that runs the gamut from errands to embarassing stunts to more intense feats of physical and emotional strength.

The initiations differ greatly across the various male and female clubs, according to friends of the new recruits.

While some clubs require initiates to clean buildings or do favors for more senior members, others favor rituals involving alcohol or staying out in the freezing cold.

The length of the induction varies as well.

And while some clubs have already started the grueling process, others will wait until after the New Year.

The clubs aim to be secretive, however, about the exact details of the process.

Most initiates and club members contacted for this article declined comment.

The initiates and their antics are getting quite a mixed reaction from students and professors alike.

Some Harvard women say they love the scantily clad men and ridiculous costumes.

Maya Z. Saalouke ’07 said almost 20 girls flocked to her room this week, in anxious anticipation of a performance by 10 topless Delphic members.

“I thought it was great. The girls all had fun and it was a good break on a Wednesday night. They’re all really nice guys,” she said.

And upper-class ladies are reaping the benefits of initiation as well.

“This week is one of the most fun weeks of the year. There is always something going on outside of the Science Center and at night there are always initiation events you can witness,” says Alyson R. Gallotta ’06, who was also serenaded by the Delphic boys.

When done in taste, even performances during class time are getting laughs and cheers.

This Wednesday, for example, it was not the scintillating lecture or interesting subject matter, but rather the highly anticipated song and dance performances of both male and female final club initiates, that helped fill almost all 200 seats of lecture in the popular class Sociology 139, “The Study of Deviance.”

Word of a surprise appearance drew double the usual attendance.

The walls of Emerson Hall were filled with an unsynchronized but enthusiastic rendition of “It’s Raining Men,” performed by male final club initiates, as the classrom filled with students, a cow and someone dressed like Spiderman.

Assistant Professor of Sociology Mark J. Zimny said he was amused by the ruckus, joking that he “did not actually have a well prepared lecture in the can, thus he welcomed the unexpected intrusion with gusto.”

Zimny said he did not find the stunts disruptive, explaining that the students politely asked permission at the beginning of class and were respectful of the time constraints.

“In general I thought it was rather harmless and somewhat humorous. If it’s wholesome, and if it’s constructive it can be part of college, but if it crosses the line…I wouldn’t be supportive. I think just singing is fine, they weren’t doing anything explicitly salacious,” he said.

And the students milked Zimny’s good nature for all it was worth.

When he called on the student dressed as a cow later in the class, the boy-heifer approached Zimny’s podium and offered him his choice of vanilla or chocolate milk. Retaining his composure, an amused Zimny chose the vanilla milk, took a sip and continued on with lecture on deviance.

But not all of this week’s class performances have received such rave reviews.

Before lecture began, a handful of boys undressed down to their boxer briefs on stage, to the hollers and hoots of a Sanders Theatre audience.

But while students said they found this first incident pretty amusing, they said the disruptions that followed became increasingly less so. Halfway through the lecture, guys dressed as a cheerleader, football player and a referee ran into the class. The faux football player stormed the stage as the ref yelled ”Touchdown.” The trio then dashed out the door.

Later on, after boys yelled expletives from across opposite sides of the balcony and then fled, students responded with hissing.

“It crosses the line to inappropriate behavior when the students themselves complained that this was disruptive to them,” said head TF of Justice Daniel M. Loss ’00.

Loss explained that the main concern of Bass Professor of Government Michael J. Sandel and his teaching staff was that the students were disruptive and did not appreciate the pranks, citing their hissing as a clear indication that enough was enough.

He said that after the “pranks,” some TFs left the lecture to get student offender names. While he said some of the students have been identified, he did not specify how they would be disciplined.

“Regardless of what particular action is taken against these individuals involved, it is important that final clubs not feel at liberty to disrupt classes,” Loss said. “What action will be taken is less importance than the overall situation and that something is done.”

And while many ladies have been left laughing by the spontaneous strip acts and serenades, some have been offended by their explicitly sexual nature.

Kaija-Leena Romero ’05, who is also a Crimson editor, said she found final clubs and their initiation processes offensive.

“You should ask someone if it’s even the tiniest bit insulting that, two nights after a woman was assaulted walking down the street just minding her business, men run around screaming drunk and shirtless,” she said. “Women are cowering in groups, afraid to walk down the street fully clothed due to worries about another attack, and these stupid boys are ranting and raving as if nothing has happened at all.”

And still others worry these initiations are not only offensive to the Harvard community but are detrimental to the initiates themselves.

But Christopher Coley, chief of medicine at University Health Services (UHS), said the hospital has not seen a significant rise in admittances due to alcohol-related illness to correspond with initiations.

“The weekly rates of admissions to UHS for alcohol intoxication have been quite stable since the middle of September,” Coley wrote in an e-mail.

“[But] one must be careful not to conclude that the absence of any change in such admission during such a time period is firm grounds for concluding anything about change in actual behaviors such as excess alcohol usage,” he added. “We really don’t know what the reality is in those situations.”