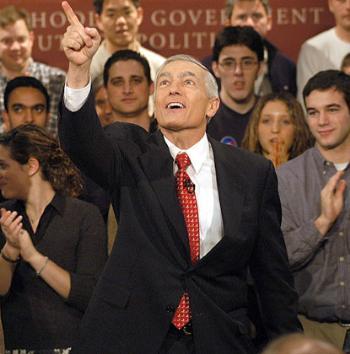 The dispute erupted after Matthews, in an interview broadcast live on national television from the Kennedy School of Government (KSG), questioned Clark’s vaunted military record.

But Matthews presented allegations levelled by retired Gen. H. Norman Schwarzkopf that Clark “was fired because of character and integrity” in 2000.

Clark countered that he was neither “fired” nor “relieved” of his duties, but that he was “asked to retire three months early” by then-Chair of the Joint Chiefs of Staff Gen. Henry “Hugh” Shelton.

Clark recounted that he was dining with the president of Lithuania when he was interrupted by a phone call from Shelton, who asked Clark to step down from his post.

Within an hour of the phone call, Clark said that Shelton had leaked news of Clark’s ouster to reporter Bradley Graham of the Washington Post. After the leak, Clark said, then-President Bill Clinton and Secretary of Defense William S. Cohen could not have salvaged Clark’s job without sparking an embarrassing public flap with Shelton.

“Bill Clinton told me himself that he had nothing to do with this, and I believe him,” Clark said.

Eli S. Rosenbaum ’05, a co-cordinator of Harvard College for Clark, introduced the candidate at the Kirkland event by comparing his biography to Clinton’s.

Rosenbaum drew laughter and applause from the Kirkland audience when he described Clark as a “charismatic Rhodes Scholar from Little Rock, Ark.,” a description that could also have applied to Clinton.

Matthews, noting that Clark’s aides included many veterans of the Clinton administration, asked, “Is that a signal that you’re the Clinton favorite?”

The candidate dodged the question and added that Clinton has played a limited role in the Clark campaign as an informal advisor. “He warned me to stay away from Chris Matthews,” Clark quipped.

Matthews, not to be outdone, responded by citing speculation that the former president and his wife would be inclined to support the weakest Democratic candidate. He mused that Sen. Hillary Rodham Clinton, D-N.Y., would have a much stronger chance of capturing the White House in 2008 if President George W. Bush won reelection in 2004.

While the Clintons have not said publicly whether they will back Clark’s bid, former Vice President Al Gore ’69 threw his support behind former Vermont Gov. Howard Dean yesterday.

Clark supporters hissed loudly when an MSNBC anchor announced the Gore endorsement at the end of a “Hardball” commercial break.

Although Clark appeared nonplussed by Gore’s decision—“I don’t pay attention to endorsements, unless they’re for me,” he said—political observers suggested that former vice president’s move may have altered the dynamic of the Democratic race.

“The impact of Gore’s endorsement of Dean is that it...enlarges the possibility that Clark, not [Rep. Richard A.] Gephardt—will emerge as the alternative to Dean,” said KSG Professor of Public Leadership David R. Gergen.

“[Clark] is finding his voice as a candidate. He is sharpening his responses. What you saw tonight is a better and improved Wesley Clark who is gaining some traction,” said Gergen, who served as an advisor to Presidents Nixon, Ford, Reagan and Clinton.

But other experts said that Clark, the only of the nine Democratic presidential hopefuls not to have sought public office before, is still showing himself to be a political neophyte.

“There appears to be a disconnect between the body language and the emotion of what [Clark] is really talking about, so that he comes across as very flat,” said Dorothy S. Zinberg, a lecturer in public policy at the KSG.

Zinberg credited Clark for his “carefully thought-out, sensible description” of his spat with Shelton. But she said that “with this group, he should be firing up their enthusiasm rather than rationalizing what was a major disappointment in his career.”

Clark’s political inexperience also showed through at the Kirkland event, where his well-rehearsed sound-bytes often failed to draw much reaction from supporters.

“That was supposed to be an applause line,” he told the audience after one awkward silence.

Students who attended the Kirkland event were surprised when—without prompting—Clark mentioned his support for a proposed constitutional amendment to ban flag-burning.

Clark conceded that his position likely put him at odds with most audience members, but he insisted that the stance was necessary if the Democratic Party hopes to reverse its losses in Southern states.

“It’s not about the Confederate flag down there. It’s about the American flag. And our party has to be smart enough to understand that,” he said.

While students praised Clark for his professed opposition to the Iraq war as well as his vehement defense of civil liberties, some said that the candidate’s comments on flag-burning left them less enthusiastic.

“It seemed like he was saying that [the flag-burning ban] is just what we have to do to get votes, even though it’s against the Constitution,” said A. Eleanor Luey ’04. “I don’t think that’s a very noble stance to take.”

Ashley N. Fochtman ’05 added that Clark’s inordinate emphasis on foreign policy during his Kirkland remarks reflected the fundamental weakness in his candidacy.

“I am willing to concede that he is hands down the best candidate in terms of foreign policy,” Fochtman said. “However, I would question his lack of experience in the domestic sphere. We cannot elect a president who does not adequately address domestic issues.”

But Clark’s student supporters vigorously defended their candidate’s domestic credentials. “He not only understands economics, he taught it at West Point,” Rosenbaum said.

Andy J. Frank ’04, president of the Harvard College Democrats, said that the Clark campaign is one of the best-organized efforts on campus. Enthusiastic volunteers distributed Clark chocolate peanut-butter candy bars at the Kirkland event to drum up support for the general.

Dean and Rep. Dennis J. Kucinich of Ohio have pledged to visit Kirkland on the campaign trail, but Clark was likely the final Democratic candidate to appear on “Hardball” this electoral cycle.

Kucinich declined MSNBC’s invitation in October, accusing Matthews—a onetime Democratic aide—of pushing a pro-corporate agenda. And Sen. Joseph I. Lieberman of Connecticut has not yet said whether he will appear on the show.

“It’s our last night here, unless Lieberman gets his act together,” Matthews said.

According to Bill White, director of the JFK Jr. Forum at the KSG, 1,720 students, faculty and community members entered an online lottery for tickets to the Clark interview.