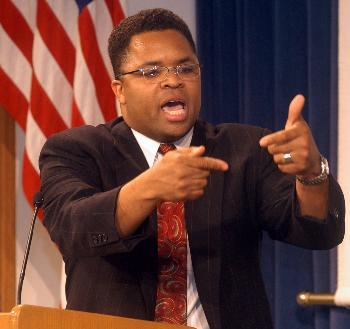 JESSE JACKSON JR. argued for a greater federal role to ensure equality in education yesterday in the ARCO forum.
By David B. Rochelson, CONTRIBUTING WRITER

Only such amendments, Jackson said, could equalize education and health care opportunities by establishing them as fundamental rights.

“We have to move beyond civil rights to human rights,” Jackson said. “We must have a broader vision for America.”

Jackson insisted that an amendment would be the only way to ensure “equal, high quality” education for all Americans by making education a federal responsibility, and requiring an equal distribution of funds to all schools.

Because the word “education” does not appear in the United States Constitution, Jackson said, power over the schools falls under state jurisdiction by the tenth amendment. Until a new amendment overrides the tenth, there is no way to equalize education throughout the country.

He said that the epidemic explained the victory of President George W. Bush in the 2000 election, despite his loss in the popular vote. Better education would ensure broader societal participation, and would raise voting rates so that half of the electorate doesn’t abstain.

“Only in America, with our under-funded education system, could the loser become a winner,” Jackson said. “[America has] 100 million people who wanted to vote, who wanted to participate, but don’t believe in our democracy anymore.”

“The issue of race has not been taught in a way that makes it digestible,” he said.

Jackson said that “equal high quality education”—as opposed to the current, “separate and unequal” education—is not just an issue of race, and must be extended to all Americans regardless of income or social status.

The right to education is no more important than the right to “decent, safe, affordable housing,” universal health care, and clean air, he added.

While community service is important—he said he would support a bill requiring some form of public service from all Americans—such service will never effectively remedy the source of America’s education problem, he said. The same is true for affirmative action and other efforts at creating equality.

“Affirmative action would be less necessary with equal education,” he said.

All of these inequalities stem from the delegation of too much power to the states, Jackson said.

For example, he said, while Mississippi draws its education funds from taxes on sales of catfish and cotton, Washington state—where thousands of students receive complimentary laptop computers—draws its dollars for schools from tax revenue from Microsoft and Boeing.

“In Mississippi, there are no laptops,” Jackson said. He drew laughter and applause, when he added, “Because students at Harvard don’t eat enough catfish sandwiches.”

Jackson drew another round of laughter when he expressed confidence in the Democrats’ presidential chances in 2004, while criticizing the failure of presidents past and present to act on education reform. President Bush has yet to take any action, Jackson said, and “He ain’t gonna do it in the last year or two he’s got left.”

The son of former presidential candidate and Rev. Jesse Jackson was received by a relatively animated crowd, eliciting nods, cheers and finally a standing ovation.

“It’s so interesting to see somebody who has such passion and idealism in today’s world, where so few public figures speak from the heart and a sense of commitment,” said Institute of Politics Director Dan Glickman.

Glickman added that Jackson’s reception in the ARCO forum was exceptionally warm.