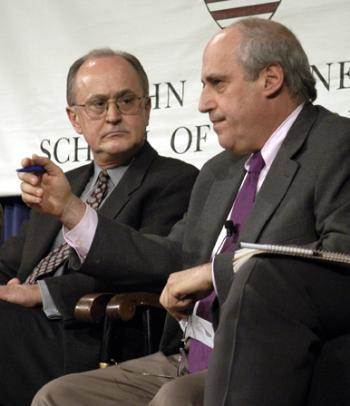 As the hours ticked down before President Bush’s ultimatum deadline, people from across the University packed into the ARCO Forum last night at 6 p.m. to hear six experts—including faculty members and a high-profile Iraqi dissident—argue about the costs, benefits and other ramifications of invading Iraq.

The panel, introduced and moderated by Kennedy School of Government (KSG) Dean Joseph S. Nye Jr.—who has recently come out in favor of war—included prominent speakers from both sides of the debate.

Those in favor of war against Iraq argued that diplomatic channels have been exhausted, contending the U.S. is obligated to remove Saddam Hussein, who one panelist called a “madman”—and that the Iraqi people would be receptive to a democratic government.

War opponents made a wide variety of arguments, ranging from concerns that a war would lead to a messy and protracted involvement to worry that the United States’ break with other members of the U.N. will irreparably hurt the country’s international reputation.

KSG Academic Dean Stephen Walt—who Nye characterized as one of the “leading voices among realists [on] why we shouldn’t go to war”—said that the United States is in danger of permanently souring its diplomatic relationships.

“We are headed into a world where how one deals with American power is the biggest problem [most countries] have to deal with,” Walt said.

Walt said that the U.S. has often failed when it has tried to impose its will on a smaller country, citing a long list of examples, including the Phillipines, Somalia and Nicaragua.

“What do we do with Baghdad once we have it?” he asked.

Even the U.S.’s two major successes, post-World War II Germany and Japan, present a different paradigm than Iraq does now, Walt said. Both those nations had previous experience with democratic rule, were aggressors in that war and had strong reasons to ally afterward with the United States, he said.

The U.S. kept troops stationed in both counties for years afterward as well, he added.

He also said that U.S.-based non-government organizations for humanitarian aid have not been mobilized, prepared or informed adequately to meet Iraqi needs for food and medicine that will worsen with the onset of war.

Iraqi dissident Kanan Makiya made the case for war. Makiya, who directs Harvard’s Iraq Research and Documentation Project and advises the White House on democracy in Iraq.

He attacked the opinion that fractured relations among Shi’ite, Sunni and Kurdish groups in Iraq would hinder nation-building after the war and said that it would not be a hostile population that American forces would meet in Iraq.

“Iraqis are by and large welcoming of American forces. They don’t feel it as an imposition,” Makiya said. “It will be a population that will wake up when the Americans enter.”

Director of the Institute of Politics (IOP) Dan Glickman—who for 18 years served as Democratic representative from Kansas—called Saddam a “madman” and pointed out the dangers of waiting before taking action.

“Time cautions us to prudence,” Glickman said. “But there are costs to the avoidance of conflict. We should realize what the costs are of leaving Saddam in possession of weapons of mass destruction and in possession of his country.”

And Director of the Carr Center for Human Rights and KSG Professor of the Practice of Human Rights Michael Ignatieff, a self-described “reluctant” supporter of war, said that waiting to enter Iraq would bring continued danger to Iraqi civilians instead of compliance from Saddam.

“The cost will be the lives and liberties of the Iraqi people,” Ignatieff said.

After each panelist spoke, the microphones were turned over to the audience.

Students and faculty from across the University lined up at the microphones to ask more questions and make more comments than time allowed. Audience members questioned everything from the timing to the motives to the ultimate utility of invading Iraq.

Students at the forum said that the panel provided a much-needed medium to hear and present views on the war.

“It was an extraordinary intellectual debate that filled a void,” Adam J. Scheuer ’06 said.

Others added, though, that the speakers did little to alleviate the confusion that many feel over war.

“I was talking to a friend and she said that it was kind of creepy here tonight, because she’d expected the speakers to have more information than we do,” said Jeffrey P. Amlin ’06. “But they don’t, they just have more arguments.”