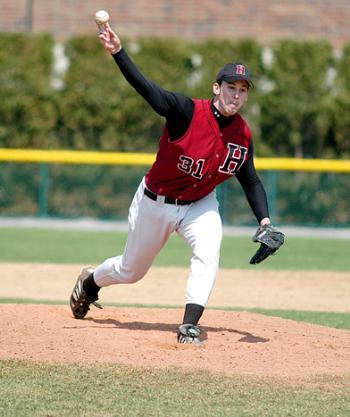 It sure looked like sophomore catcher Schuyler Mann was late getting back. When the catcher dove into first base just a split-second behind Yale pitcher John Janco’s pickoff throw in Saturday’s second game, it certainly seemed that yet another Harvard inning, along with Mann, had gone up in a cloud of dust, one more casualty of the between-game lull that has provoked Harvard coach Joe Walsh to indefinitely ban parent-sponsored potlucks from future doubleheaders.

But then the umpire signaled safe, and suddenly, instead of an enraged Walsh storming off the field from his third base coach’s box, it was enraged Yale skipper John Stuper storming onto it, barking all the way.

“You can’t make those mistakes in a close ballgame,” Stuper said. “Bear down!”

Moments after Mann was declared safe, it was clear that Harvard was, too. Mann brushed himself off and came around to score on a two-base error by Yale outfielder Chris Elkins, helping the Crimson to an 11-1 win to sweep the doubleheader day. Just like that, after running into two costly outs and failing to defend a double-steal play in a 9-8, 11th-inning loss on Friday, Harvard had taken three of four from the Bulldogs and seized a full-game lead atop the Red Rolfe Division standings.

“We got a break,” Walsh said about the Mann call. “Hey, it’s nice to get one once in a while.”

In truth, plenty of breaks went Harvard’s way against Yale (13-18, 4-8). On a weekend when freshman pitcher Matt Brunnig made his return from injury and junior centerfielder Bryan Hale (9-for-16, 7 runs scored) made his return from oblivion, one of the only mars was a flare-up in junior Trey Hendricks’ knee that forced him to leave the field Saturday on a cart.

Though generally satisfied with the weekend’s developments, Walsh couldn’t help but think about the one that got away Friday.

“I just hope that game doesn’t come back and hurt us,” he said. “That’s one we’re going to look back on all season.”

Senior Kenon Ronz lived up to his coach’s hyping.

The Harvard lefthander pitched a complete game in Saturday’s series finale, no-hitting Yale through 5.1 innings and striking out 14, as the Crimson prevailed, 11-1.

The successful pitching performance came as no surprise to Walsh, an unabashed Ronz promoter.

“I thought he threw well,” Walsh said. “A [scout] from the Indians organization came to see [Yale’s game one starter Mike] Elias. I said [to the scout], ‘Stick around if you want to see a lefty who can throw’.”

Ronz (2-2) would have had a shutout, except that freshman third baseman Morgan Brown botched his throw to first base on what should have a routine groundout in the first inning. The misplay allowed the batter, Yale’s Josh Zabar, to move all the way to second, and he later scored on a wild pitch. That put the Bulldogs ahead, 1-0.

Harvard responded with two runs each in the third and fourth, both times courtesy of Yale errors. In the third, Elkins dropped Crimson shortstop Ian Wallace’s pop fly, allowing Mann and senior Brian Lentz to come around with two outs. An inning later, the Bulldogs muffed the relay throw on a double-play ball, letting freshman Chris Mackey score. Hale, after stealing second and third base, added Harvard’s fourth run on a wild pitch.

Ronz, meanwhile, was cruising. After stranding men on second and third in the sixth, he let the first two Yale hitters reach in the seventh, but struck out C.J. Orrico and got Steven Duke on a flyout to center.

“Their 8 and 9 hitters had been struggling, so I was happy to see them up in that situation,” Ronz said.

Ronz retired the side on a 3-1 putout that featured a nice dig at first by freshman Mike Dukovich. The rookie entered the game when Hendricks aggravated a knee injury that has bothered him since the fall. Walsh said the team will be monitoring Hendricks’ situation this week.

Ahead 5-1 in the eighth, Harvard busted the game open even further with five runs. Hale and freshman Zak Farkes had back-to-back RBI triples, and Lentz, senior Nick Seminara and sophomore A.J. Solomine had run-scoring singles.

Sophomore Mike Morgalis escaped a one-out, bases-loaded situation in the fifth and hung on to earn his second win with the Crimson.

Harvard knocked around Elias in this game, posting three runs in the first on an RBI double by Hendricks and an RBI single by Klimkiewicz. The Crimson then batted around in a four-run fourth that was highlighted by Lentz’s two-run double to the gap in right-center.

Working with a 7-2 lead in the fourth, he gave up a single and hit two batters to load the bases. Orrico then walked to give the Bulldogs their third run, but Morgalis struck out the next two batters to evade further damage.

Harvard added an insurance run on Klimkiewicz’s double down the left field line in the fourth that plated Hendricks.

Senior captain Barry Wahlberg, pitching with a wart on his throwing hand that limited his effectiveness a day earlier, closed out the game for Harvard.

It was a clear double-steal situation when Yale had runners on the corners with one out in the 11th inning of Friday’s nightcap. The Harvard infield seemed to surmise as much, convening a conference on the mound.

But while the Crimson, Walsh later revealed, had decided to throw at the trail runner, Wallace somehow neglected to cover second base when the play developed. That allowed Mann’s throw to sail into center field and Randy Leonard trotted home from third to give Yale a one-run lead. The Bulldogs added one more run before the inning was over, and though Harvard got one back in the bottom of the 11th on an RBI single by Lance Salsgiver, Yale escaped with the win, 9-8.

It was a game of defensive mixups from the start, and Hendricks, who started for the Crimson, was the victim.

The Bulldogs jumped out to a 3-0 lead in the top of the first thanks to the first two of Harvard’s five errors.

The first, a dropped fly ball in left field by Mackey, put runners on second and third with just one out. The second was an errant throw to third base by Mann that allowed an extra run to come home on a Mike Gulker double.

“We didn’t come out focused in that first inning,” said Walsh, who went on to suggest the picnic atmosphere before the game was perhaps responsible for the mental lapses.

“We talked about that today—being home with all the parents and the fans around after the first game and everybody’s clawing at you, trying to shove chocolate chip cookies down your face and we’ve got a ballgame. There’s no more of that. We’re gonna be standing out here in front of the dugout. I don’t know whether that’s the reason or not, we’ve just got to regain focus out there.”

The extra-inning loss spoiled a pair of comebacks in the game by Harvard, from deficits of 5-1 and 7-5. Especially painful were a pair of a baserunning blunders.

With two runs in and no outs in the fourth, Mann was erased after running on contact from third on a ball hit back to the mound.

Later, again with no outs in the bottom of the ninth, Hale, whose RBI double earlier that inning had tied the game, 7-7, took off when Salsgiver bounced a grounder to third. He was gunned out at the plate as well.

“We should’ve been home with that win after [nine] innings,” Walsh said. “Hale had a misread there, he saw the ball being chopped and he trusted his speed too much. He shouldn’t have even moved, he should’ve stayed home and left it up to Farkes.”

Walsh added that he would have had Farkes squeeze in that situation.

“We would’ve won the ballgame and gone home,” he said.

After two weeks out of action with a sore shoulder, Brunnig (3-1) wasn’t going to let a little cold weather stop him from making his debut at O’Donnell Field.

“I was kind of concerned, but he wanted to go. He felt good,” Walsh said. “He’s going to win a lot of games for us over the next four years.”

Brunnig said he wasn’t used to pitching in those conditions, but it wasn’t hard making adjustments.

“In Florida, you don’t see many games below 65 or so. I think I pitched one down there around 55,” Brunnig said. “My control was off a little. But you throw your fastball, change speeds, try and hit your spots. It’s fun trying to adjust.”

Klimkiewicz, playing on a swollen knee, stoked the offense with a grand slam in the fourth inning. After Hendricks and Mann singled and Wallace reached on a fielder’s choice error, Klimkiewicz jacked the first pitch he saw from Yale’s Josh Sowers (4-2) over the fence.

“I just wanted to hit the ball in the air to the outfield, [score] the guy on third, get a run,” Klimkiewicz said. “I just got a good pitch.”

Hale scored Harvard’s first run in the third on a wild pitch. He had led off the inning with a double.

In the sixth, Hale singled in two more runs to account for the rest of Harvard’s scoring.