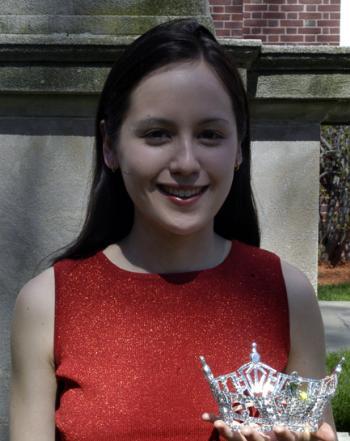 LAURIE B. GRAY ’03
By David B. Rochelson, Contributing Writer

Laurie B. Gray ’03 said she was “a wreck” when, while wrapping up her biology thesis last month, her parents began ferrying her home each weekend for marathon sessions to practice her strut, smile and speech.

But the stress paid off this weekend, when Gray beat out 15 other contestants to take the 2003 Miss Rhode Island crown and earn a ticket to the biggest beauty pageant of all—September’s Miss America competition.

Gray became the first contestant in the Rhode Island event’s history to sweep the three preliminary stages, officially known as “presence and poise in evening wear,” “lifestyle and fitness in swimsuits” and “artistic expression in talent.”

On Saturday night she accepted the crown and the scholarship and stipend award, which amounted to more than $10,000.

Back at school yesterday, Gray said she worries that her new crown will conjure up Harvard student’s preconceived notions of beauty queens who walk away with “a car, a fur coat and a modeling contract.”

Gray stressed that the winners of Miss America and the related state pageants assume a responsibility to the community.

Gray said her platform—which she defended to the judges on Saturday—grew out of her own experience with music in Rhode Island’s public schools.

“Fortunately my school had a really strong music education program,” she said. “I wanted to make sure that all students have the same opportunities.”

Gray said she plans to contact each of the 37 school districts in her native Rhode Island to help improve their music programs.

A winner of the Junior Miss Rhode Island competition as a senior in high school, Gray said she thought that when she came to Harvard her pageant career had ended. She said she had enjoyed the experience but, she added, “It wasn’t my thing.”

At Harvard, Gray has focussed her extracurricular life on music—playing for a time in the Bach Society Orchestra—and community service, including the MIHNUET and HARMONY programs.

But Gray was drawn back to pageants after an expos paper devoted to the Miss America pageant led her to realize that potential winners have to give back to society.

After taking fourth runner-up in the Miss Massachusetts pageant last year, Gray decided to compete again this year, but in a state with which she was more familiar.

But Gray was drawn back to pageants after an expos paper devoted to the Miss America pageant led her to realize that potential winners have to give back to society.

After taking fourth runner-up in the Miss Massachusetts pageant last year, Gray decided to compete again this year, but in a state with which she was more familiar.

“I love Massachusetts but I know the music education system in Rhode Island much better, so I think I might be more effective there,” she said.

She added that this year’s Miss Massachusetts pageant is at an inconvenient time. “I was not going to miss graduation,” she said.

But already, Gray is finding that it’s not easy to balance new duties with a strenuous senior spring.

“I’ve been Miss Rhode Island for about 36 hours but I’ve already gotten started trying to book myself for events,” she said. “It’s pretty crazy, I didn’t know what I was getting into exactly.”

Gray drove down to Rhode Island yesterday for an interview, and returned for a class at 7 p.m. She said she is hesitant to tell her professors why she needs extensions on papers and exams.

“It was a little bit weird when she first won because she was all of a sudden a huge celebrity,” boyfriend Daniel D. Sedgwick ’03 said. “So many people rushing up to talk to her, it was impossible to get her attention.

Sedgwick notes that he is not at all apprehensive about a national TV audience seeing his girlfriend in a bathing suit.

Emily Murphy ’03, Gray’s roommate since their freshman year, said Gray has a “really healthy attitude” about the award. Murphy said her pageant-winning roommate is truly devoted to her platform.

“She’s so put together and poised and honest and genuine that she totally deserves this,” Murphy said.

As much as Gray stressed the serious responsibilities of Miss America, she recognizes that appearance is important.

“It’s truly about community service and scholarship [but] at the same time she needs to have qualities that make people want to see her on TV,” Gray said.

But friends said they’ll be there in person when Gray’s turn comes this September. “Not many of us are employed so hopefully some of us can take some time off from grad school and go to Atlantic City and cheer her on,” Murphy said.

Sedgwick said his girlfriend wouldn’t be discouraged by the fact that Miss Rhode Island has not placed in the top 10 in the national competition since 1968.

“I think she actually thrives on being kind of the underdog,” he said. “When she feels like she’s supposed to win that’s too much pressure.”