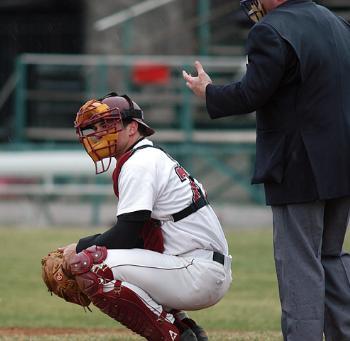 Earlier this spring, when Harvard coach Joe Walsh learned that the Crimson’s media guide was being shortened at the expense of player bios, Walsh selflessly urged that his own bio be cut to make room for those of his seniors. He didn’t get his way.

Prior to yesterday, the 6’2 senior righthander had made a career as a spare part on Harvard’s pitching staff. That’s all he was meant to be again yesterday, too, as shoulder soreness made freshman hurler Matt Brunnig a late scratch from this weekend’s rotation and caused Walsh to opt for a patchwork of Crimson relievers to replace him in yesterday’s nightcap at Columbia.

Heard of closer-by-committee? This was starter-by-squadron.

But Self-ishly, the Nashville native refused to give the rest of Harvard’s relievers a chance. Making the most of what was only the third—and by far the biggest—start of his career, Self made his job look easy, in part because he let his fielders do the dirty work. Through his first seven innings, every batter he faced put the ball in play—but usually right at someone. Only four baserunners reached during that stretch. One of those was erased by senior catcher Brian Lentz when he tried to steal. The others were harmlessly stranded.

Self didn’t manage any strikeouts yesterday, but what he lacked in pure power he more than made up for in Self control. He walked just one, and that didn’t come until the eighth inning, when Self, who’s already thrown more innings this season than any of his previous three, made his exit. He was still in line for the win when he left. But one day after the Harvard bullpen failed to preserve a victory for junior Trey Hendricks at Penn, it couldn’t save Self either. He took the loss for his first decision of 2003.

But the poor result couldn’t overshadow Self’s effort on this afternoon, which—for all intents and purposes—was Senior Day, one month early. Before yesterday, no two members of Harvard’s class of 2003—all but two of them pitchers—had won an Ivy weekend start in the same season. Against Columbia, two nearly did in the same day. Southpaw Kenon Ronz got the win in Game One, validating a hard-luck class of moundsmen who’ve had their moments, but have never been consistent.

Yesterday was Self’s turn to star. For his next trick, he’ll try to avoid flash-in-the-plan status. Recent history is on his side. The grind of the league season, whose back-to-back doubleheader format subjects Ivy pitching staffs to a mean sort of social Darwinism, has a way of making household names out of no-names. Consider the rags-to-riches story of Chaney Sheffield ’02, last year. A former walk-on, Sheffield was tabbed as a last-minute replacement last April amid a starter crunch not dissimilar to this weekend’s. Once he cracked the rotation, he never left, surviving all the way to the title-clinching victory in last May’s Ivy championship series against Princeton.

Self’s season may not be on the same trajectory, but, at the very least, Walsh has found a serviceable fifth wheel. Next time a weekend emergency pops up, the Crimson’s best fill-in option will be Self-evident.