Annual festival to feature over 100 performances 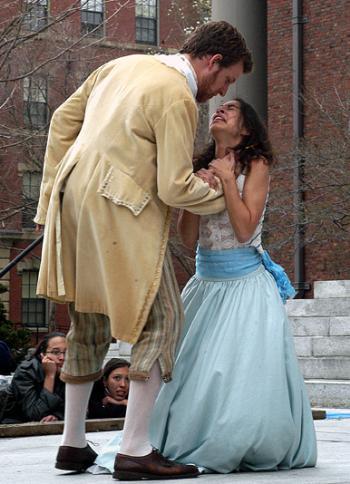 Men clad in knee-length trousers, stockings and ruffled collars, and women in elegant Elizabethan dresses, converged on the steps of Memorial Church to kick off the 11th annual Arts First celebration yesterday.

Their performance of an adapted version of Shakespeare’s Much Ado About Nothing is one of over 100 events which will make up this year’s festival.

Arts First—which will run from May 1 to May 4—was created in the early 1990s, as a way to draw attention to the arts at Harvard.

“Working in a festival like this is a wonderful forum for different kinds of artists to work together,” said Mary Kate Burke ’06, who performed with the troupe. Burke is also a Crimson editor.

Similar Arts First shows took place all across campus yesterday. Some presented an adaptation of Richard III, set at the fall of the Aztec Empire, at the Loeb Drama center. Other events took place at Adams House’s Pool Theater and Radcliffe Yard’s sunken garden.

Director of the Office of Arts at Harvard Jack C. Megan said the Arts First celebration helps the artistic community assert its importance.

“I think it’s especially important right now because there are so many challenges facing the arts here and in general in society,” Megan said. “I think at Harvard the challenges for arts are space and time in the curriculum. But more generally, people always need to make the case for the importance of arts, that they’re an integral part of being alive.”

Emmy Award-winning actor John Lithgow ’67, a former University Overseer who was one of the creators of the Arts First program, will serve as the grand marshal for the Arts First parade tomorrow. The procession will begin at 11 a.m. in front of Lamont Library and will wind its way through Harvard Square.

Following the parade, Lithgow will officially open ceremonies in front of University Hall.

Later tomorrow evening, Lithgow will moderate a discussion with Mara Niar ’79, director of the film Monsoon Wedding and winner of the ninth annual Harvard Arts Medal, which is awarded to alumni for achievement in the arts.

Pagan-Teitelbaum and Allen said they are looking to garner support for a wood shop at Harvard next year, and the event featured many of their own wooden creations.

The tutors said that events like yesterday’s reception provide the opportunity for many people not typically associated with the arts to demonstrate their talents.

“It’s a chance for students to show what they can do, not just in the classroom,” Allen said.

Even with the presence of celebrities such as Lithgow, Megan said the focus of Arts First remains primarily on Harvard students.

“I think Arts First is really a celebration of art-making by undergraduates,” Megan said. “It demonstrates the incredible breadth of activity in the arts and showcases a tremendous amount of talent.”