Fighting in the 'Forgotten War'

As stories of the brutal combat floated back to campus, members of the Class of 1953 shipped off. 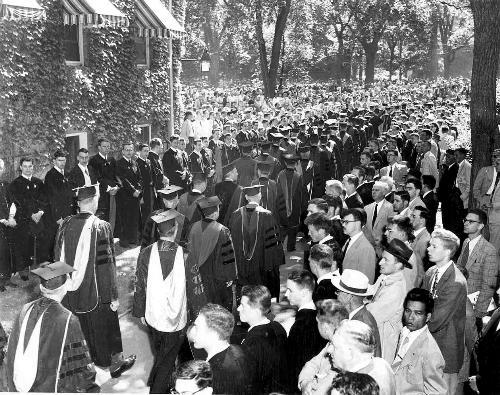 Graduates of the Class of 1953 process into the Yard during Commencement exercises after a spring filled with friends shipped off to Korea and scandal over accusations of communists at Harvard.
By Alexandra N. Atiya, Crimson Staff Writer

War broke out just after the members of the Class of 1953 finished their first years at Harvard, and it dragged on until just after they graduated.

“My image of warfare was hardly romantic,” says James M. Storey ’53, a history and literature concentrator who did not serve in the war, and did not enroll in the Reserve Officer Training Corps. “My brother was killed in World War II. So I began my life knowing about the bad things in war.”

“When I talked to people who were coming home from the Korean war, all of that was confirmed,” he adds.

But despite the generation’s intimate knowledge of the horrors of war, for those three long years, most remember little debate in dining halls and classrooms about the war’s purpose, save the protests of one or two left-wing groups like the Young Progressives.

Despite Harvard’s leftist reputation, many members of the Class of 1953 say they felt generally in line with the rest of America on the question of the Korean conflict.

And many remember thinking that the war was necessary to stem the spread of communism in Asia.

“It was a challenge. And Harvard was a challenge. It was consistent that those of us who were in college, especially in Harvard, that it was particularly incumbent upon us—those chosen few among the many that applied—to do what was expected of us,” says Robert L. Consolini ’53-’56, who took two years off from college to serve in the army.

“We weren’t looking for approbation from our peers, we were looking for a sense of being at ease with ourselves,” he adds.

Students received deferrals from fighting until they graduated, although some—like Consolini—chose to leave Harvard and join the armed forces. One member of the Class of 1953 was declared missing in action during the war, according to University archives.

The war began in 1950 when North Korea attacked South Korea and—with U.N. authorization—the United States sent in troops to reinforce the South. The conflict was widely seen as not only about protecting Korea, but about containing the emerging communist powers, the Soviet Union, which was believed to have been aiding the North, and China, which joined the side of the North in October of 1950.

By the time the student deferrals of the Class of 1953 neared expiration, the war had degenerated into stalemate along the 38th parallel, which formed the original boundary between the North and South. By mid-summer after the Class of 1953 graduated, both sides had signed an armistice.

But the Korean War—often called the “forgotten war,” since Vietnam and World War II are generally better remembered—was a complicated issue for the Class of 1953.

The Allies had won World War II less than a decade before, and that well-celebrated triumph—as well as the United States’ new position as a global superpower—contributed to the generation’s sense of loyalty to the United States’ foreign policy.

But the nearness of World War II also meant that members of the Class of 1953 knew many veterans—and many stories about the war—and so did not hold many illusions about the grim reality of combat.

“It was not a time when people would refuse to serve or go to Canada to get out of it,” says Walter Greeley ’53, who was first marshal of the class.

The Korean intervention was riding on the tails of World War II—a war which was an uncontested victory with widely unchallenged motives.

In 2003, after the United States started dropping bombs on Baghdad, more than 1,000 Harvard students walked out of class and took to the streets in protest.

In 1953, alums recall a different sentiment.

Some cite Vietnam—which one member of the Class of 1953 describes as the war that “had time to go bad”—as a turning point in public opinion about American wars.

But World War II had a complicated effect on the members of the Class of 1953.

On the one hand, having grown up during the so-called “good war,” members of the Class of 1953 were more willing to accept without question the rectitude of the U.S. foreign policy. But on the other hand, the members of the Class of 1953 had heard stories about battle first-hand from buddies who had fought in World War II—and knew too much to trust newsreels from the Korean War that depicted goreless fighting.

“We saw upperclassmen go off and get killed in Korea,” Greeley says. “It was a pretty sobering time.”

Eric G. Wagner ’53 has similar memories—in particular, he recalls stories that one veteran friend told him before before Wagner entered his second and third year of college.

Wagner’s friend had served in World War II. He had witnessed the horrors of shellshock—one of the men in his unit had dived into a ditch to get out of the line of fire, but became catatonic once the man beneath him died.

One his friend’s first experiences in the service, Wagner said, involved picking up and carrying corpses with such severely broken bones that they drooped like rag dolls.

“He had an endless collection of stories,” Wagner says. “His best friend there was killed by friendly fire...They had to restrain him from killing the machine gunner.”

Despite the chilling stories he’d heard, Wagner—who later campaigned against the Vietnam War—didn’t resist the draft when he was called up after graduation.

When drafted, Wagner left his post-graduation job at IBM and served in the army in Japan for two years.

And the undergraduates weren’t alone in feeling patriotism and obligation towards the war effort.

One of the top advisers to then-Unversity President James B. Conant ’14 was Grenville Clark, a former member of the Harvard Corporation, who graduated from the College in 1903.

In his 50-year class notes, he wrote about the Korean conflict, comparing that war to World War II.

“Both of these wartime efforts were purely of civilian origin and illustrate a long-felt conviction of mine—that in a crisis, the people, instead of relying upon a government must take the initiative themselves,” Clark wrote.

“When people look back at the ’50s and say that there was not much activism, part of it was related to the fact that everybody went into the service,” Greeley says.

“Our generation was fairly used to war,” says John H. Zentay ’53, a government concentrator in Lowell House, who was drafted a mere 20 days after graduation. “Our parents had been in the First World War...the beginning of our consciousness was Hitler and Germany.”

“Korea was sort of part of the progression, so it wasn’t that unusual,” he says.

Some professors debated, particularly in anticipation of the 1952 Eisenhower-Stevenson elections, what the U.S. should do in the “Asian conflict.”

The discussion was usually fairly technical, focusing on specific bits of military policy rather than the overarching questions of when and whether the U.S. should intervene in other countries.

Nearly everyone agreed that the United States was correct in taking action.

Zentay said only a few student groups, such as the Young Progressives, opposed the fighting.

“There were some on the fringe who objected to war because they thought that America was the imperalist nation fighting these wonderful communists,” Zentay says. “But that was a real left-wing fringe organization.”

The Young Progressives, which campaigned for a ceasefire, also defended communism. Their president asked that Harvard not automatically assume that the Communist Party is wrong. One of their major goals was getting the United States to recognize “red China.”

But Wagner, who became active in the anti-Vietnam movement by supporting senatorial candidates opposed to that war, said he could remember little active anti-war sentiment on campus during the Korean war.

“There certainly was doubt but I can’t remember anything coming of it,” he says.

Charles Ufford ’53 was raised a Quaker and, according to the tenets of his religion, registered as a conscientious objector when his draft examination rolled around at age 18.

But by the end of his time at Harvard, he dropped his conscientious objector listing and filed a student deferral. Ufford says he felt he needed to serve.

But, he says, his decision was more about him being personally ready to serve, and not about necessarily coming around to support the political cause.

“It was largely independent of the U.S. policy or its policy or opposing the North Korean invasion,” he says. He says he had a “great realization” that his initial resistance to the war did not stem from his personal convictions, but rather was handed down to him from the leaders of his church.

“It was that feeling of being somehow different, and then as a I got older, year by year, it seemed to me that my activities and outlook on things were really not so much different from all my contemporaries,” he says.

Some student groups on campus were addressing the matter, but not significantly.

Richard A. Richmond ’53 says he thinks that the lack of 24-hour media may have also contributed to the tempered debate—students were not often subjected to images of war, nor were they able to follow the events in Korea minute-by-minute.

Even the part of the war that struck closest to home for Harvard students—the draft—merely “annoyed” the campus, as The Crimson reported.

On Monday, Sept. 22, 1952, the day after the Class of ’53 registered for their final year of college, The Crimson published a story about a poll of 5,000 students in top colleges across the nation. The story ran with the headline: “Student Poll Reveals Harvard Men Annoyed by Draft—Like Everyone.”

In the article, the Cornell professor who ran the poll compared students’ attitudes toward the war with his father’s toward his taxes.

“He meets his obligation but he doesn’t necessarily like it,” he said.

During the Vietnam war, students at Harvard and across the nation protested the draft. Even during the recent military action in Iraq, a Crimson poll revealed wide opposition to the war among students, in sharp contrast to rest of the nation.

But at Harvard in 1953—despite the University’s image as a hotbed of raging leftists and snooty intellectuals—students were no more opposed to or offended by the draft than at any other comparable college.

“The Harvard responses,” wrote the article’s author, “were what you might call typically American.”