For Simpsons Writer Meyer, Comedy is No Laughing Matter 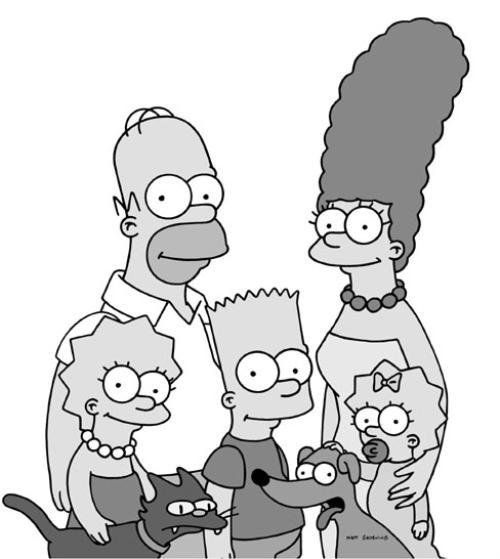 From crooning for fellow Square frolickers to tickling the funnybone of 14 million Americans every Sunday night, George A. Meyer ’78 has always known how to get a rise out of those around him.

Today an executive producer of “The Simpsons,” one of network television’s longest-running and highest-rated shows, Meyer honed his skills as an entertainer during his years at Harvard. Back then, Meyer was often just one of a group of friends sitting outside the Harvard Lampoon, a semi-secret Sorrento Square social organization that used to occasionally publish a so-called humor magazine. From the steps of the Lampoon’s Bow Street castle, he would sing songs into the night.

It was not uncommon for the police to break up such impromptu gatherings after noise complaints from neighbors, fellow ’poonsters say. From time to time, though, the music would continue—perhaps for hours—without any interruption.

Nights like these were far too placid for Meyer’s tastes, according to longtime friend George F. “Chip” Johannessen ’77-’78.

“If no one had called the police, George would go inside and call the police himself just to start the commotion,” Johannessen says. “He has a strong need for things to happen.”

Meyer has made a career out of making mischief—whether calling the cops on himself and his boisterous friends or personifying the American family as a group of dysfunctional, spiky, yellow cartoons.

The Man Behind Springfield

In the 14 years since its debut, “The Simpsons” has garnered accolades and praise on a titanic level.

“To describe it as the greatest TV show in history would (and still does) minimize its importance by limiting its cultural impact to the small screen,” an article in the online magazine Slate contended this year.

But viewers thinking of the show may find that Meyer’s name does not come immediately to mind.

“It’s hard to convince anybody but the experts what George does,” says Jonathan M. Vitti ’81, another writer and producer of the show.

And yet when millions laugh around the world, they are usually laughing at Meyer’s jokes.

“A crazily high percent of viewers’ favorite jokes can be traced to George,” says Vitti. “He has the ability to put four jokes in a script, and they’re the four that viewers tell you about the next day.”

Despite this comedic Midas touch, however, Meyer’s role is elusive.

A 2000 profile written for the New Yorker by David L. Owen ’78, who knew Meyer during their years at Harvard, describes Meyer’s labors in that place which “Simpsons” writers know as “the room”—the Fox offices where rough drafts of episodes are painstakingly revised into hilarity.

Indeed, Meyer rarely writes drafts of entire scripts alone, preferring instead to save his talents for the room, where the revision and perfection of others’ work takes place.

It is an alchemical domain, a magical space where scripts come in funny and leave splitting sides. But the room’s wizards often go uncredited—the room does not lend itself to stardom.

“At a very early point, they realized that George was too important to let out of the room,” Vitti says. “So there are a very small number of scripts that say ‘Written by George Meyer.’”

According to Internet archives, that number is 12. But this is a woeful understatement of Meyer’s impact on the show, those in the know insist.

“He’s the one in the room who writes more of the show than anyone else—his fingerprints are on nearly every script,” says Vitti. “He exerts as much influence on the show as anyone can without being one of the creators,” he adds.

According to insiders, the approach Meyer uses to produce such stellar comic results at “The Simpsons,” involves an obsessive—almost inhuman—devotion to quality. “The physical pain lousy comedy costs George is incredible,” Vitti says. “You don’t want to be responsible for that.”

In this way, colleagues say, Meyer’s presence spurs other “Simpsons” writers to be funnier.

But in addition to inspiring greatness in those around him, Meyer has spent his entire life coming up with his own gags—a talent he clearly has in abundance.

Meyer’s own jokes, Vitti stressed, are characterized by economy.

“It’s good for the show—but sad to watch—when you write a paragraph in search of a joke and George replaces it with a sentence which is funnier and clearer than what you had,” Vitti says.

Even among television’s greatest professional pranksters, Meyer stands out.

“A lot of great comedy writers will fall back on conventional things in a pinch,” says Vitti. “Once you’ve written sitcoms for a number of years, you can watch most TV shows and you could almost number the jokes: that’s 18a; that’s 32b.”

Meyer, though, is above such quick fixes.

“George comes up with things which even as a writer you’ve never heard before,” Vitti says. “The ability to surprise the writers is something George does more than anybody else.”

Home in His Castle

According to those on the Lampoon with Meyer, his flair for offbeat comedy dates back to his days at Harvard.

“George, from day one, was at a different level of humor” than other Lampoon writers, recalls Steven G. Crist ’78, who also worked for the Lampoon.

“I think for the most part people at the Lampoon were clever and witty, and could do clever parodies and things like that, but George was laugh-out-loud funny,” says Crist. “It wasn’t a formal, studied, essayist sort of humor.”

Johannessen, who has written for television programs including “24” and “Beverly Hills, 90210,” agrees.

“The Lampoon was just not nearly as tripped-out as George was,” he says.

Indeed, Johannessen adds, Meyer “was very unlike anything Harvard had seen before.”

“He was the opposite of all the preppy stuff that was still the scene there 25 years ago,” says Johannessen.

But Meyer was in his element at the Lampoon, and ultimately became President.

“The Lampoon was a refuge for him,” says Owen.

In Owen’s 2000 profile, Meyer was quoted as saying that he was drawn to the Lampoon because “people took humor very seriously” there.

“There was nothing more important on earth than laughing and making other people laugh,” he told Owen.

After graduating from Harvard, Meyer applied and was accepted to medical school—but ultimately he chose not to go. Johannessen says he thinks this was a wise choice.

“The world’s a better place because he’s not out there trying to heal people,” Johannessen says. “He’d be like the TV doctor—too inherently wacky.”

Instead of studying the healing arts, Meyer sought to find a community like the Lampoon—one where he was surrounded by others who had the same quasi-fanatical interest in humor. He continually sought out such an environment during the eighties—writing for such programs as NBC’s “Saturday Night Live” and “Late Night with David Letterman.”

These experiences were rewarding for Meyer in his search for others with a similar frame of mind. It was during his time at “Saturday Night Live,” in 1986, that Vitti says he first worked closely with Meyer.

But at none of these jobs did he find quite the same madcap fraternity which had made him so happy at the Lampoon. Meyer told Owen in 2000 that his job at “Saturday Night Live” had been “just a mismatch, although I didn’t realize it at the time.”

Not until he came to “The Simpsons,” shortly after its 1989 debut, would he find anything approaching that haven of humor—and even there, he has said in the past, he is not entirely satisfied.

“Writing for ‘The Simpsons’ is fun, but in some ways it’s too easy,” Meyer is quoted as saying in Owen’s profile.

But comedy wasn’t the only thing on Meyer’s mind at Harvard, friends say. He was also consumed by a love of gambling—especially betting on dog races.

Johannessen says Meyer brought the same intensity of emotion to his racing as he does to his jokes.

“He was very devoted to certain dogs,” he recalls. “Sometimes they broke his heart.”

Indeed, says Johannessen, Meyer was “broke” as often as he was “awash in cash” after his betting escapades.

But Crist stresses the systematic rationality with which Meyer approached the track.

When the two planned their adventures with chance, Crist says, Meyer’s approach was “to try to be very analytical, to figure things out with deductive reasoning.”

Meyer was looking for “the mathematical secrets of the universe,” Crist adds.

In particular, Crist remembers the summer of 1977, when 7 or 8 Lampoon writers—including himself, Meyer and Owen—stayed in Cambridge to work on The Harvard Lampoon Book of College Life, which Doubleday had commissioned.

Owen says the house belonged to Professor Harvey Cox, who lived at the time on Frost Street.

“We were supposed to sit there and work on the book all summer,” says Crist. Instead, “George and I sat at the kitchen table all night with stacks of books trying to figure out the secret of dog racing.”

But Crist sees no inconsistency between Meyer’s abstracted, mathematical philosophy of betting and his chaotic, loony sense of humor.

“There’s an element among people who spend a lot of time at the racetrack of an anti-authoritarian, unconventional—if not entirely anarchic—frame of mind,” Crist says, and this applies to even the most intellectual and rational of gamblers. “It’s a little bit like running away and joining the circus. That characterizes George’s worldview and what he’s gone on to do.”