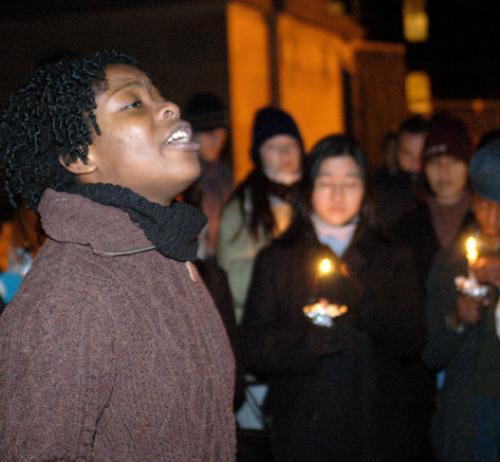 IYEOKA OKOAWO of the Spoken Word Society sings at a candle light gathering as part of “Take Back the Night” week on April 10.
By Sarah M. Seltzer, Crimson Staff Writer

As the Faculty filed into University Hall for their May 6 meeting, about 100 students held a subdued rally outside, demonstrating for a better College policy on sexual assault.

The scene was hardly reminiscent of another rally on the same steps last year, when over 200 students took part in an emotionally-charged rally to protest the Faculty’s approval of a new sexual assault policy.

The cause of that rally, which was covered by the national media, was new language on the peer dispute policy which required students who said they had been sexually assaulted to provide “sufficient corroborating evidence” before the Administrative Board would decide to hear a case.

This year’s rally had little of the earlier protest’s angry tone—this time, the demonstrators were there to support the Faculty, not to decry them.

Much has changed in a year. In response to student protest and faculty outcry over the corroboration rule, the College appointed a committee last fall—led by Professor of International Health at the School of Public Health Jennifer Leaning ’68—to re-examine Harvard’s handling of sexual assault cases.

The Leaning Committee’s findings, released this April and approved by the Faculty in late May, marked a huge victory for the Coalition Against Sexual Violence (CASV)—the principal student activist group dealing with sexual assault—and their supporters on the Faculty.

The policies adopted out of the Leaning Committee’s findings will mean tangible changes in how the University handles sexual assault—including the virtual elimination of the controversial corroboration rule, more extensive resources for sexual assault victims and expansive educational programs for both first-years and upperclass students.

However, these sweeping changes were a long time in the making. In spring 2002, the Faculty quietly voted on the language of the peer dispute policy, adding the requirement of “sufficient corroborating evidence.”

But several days later, students and faculty members protested the change, saying that it would intimidate female victims and discourage them from coming forward.

And faculty members expressed concerns over the way the rule change was passed. Many said that they did not realize that so-called peer disputes included sexual assault cases.

Students in the CASV and others urged the University to reconsider its corroboration requirement, and one anonymous student filed a lawsuit with the government’s Office of Civil Rights (OCR), alleging that this new rule violated Title IX laws.

In response, Dean of the College Harry R. Lewis ’68 and Provost Steven H. Hyman formed the Leaning Committee in May 2002 to review Harvard’s sexual assault policies, including educational programs and the resources it provides victims.

The committee—comprised of administrators, professors, students and medical experts—launched a year-long investigation into sexual assault at Harvard.

The inclusion of two undergraduates on the committee pleased student leaders, who said they felt that they often did not have enough input in upper-level decisions.

“This committee had students on it for a change,” Undergraduate Council president Rohit Chopra ’04 said at the May rally. “Things are looking up.”

Throughout the fall, the committee met with students who had been involved in cases brought before the Administrative Board (Ad Board), peer counselors, faculty, national and local experts and held several open meetings around campus as they gathered information for their report.

Meanwhile, the OCR—following up the anonymous complaint filed the past spring—conducted its own concurrent investigation into Harvard’s sexual assault policies.

During the fall, Harvard changed the wording of the evidentiary requirement for peer disputes on the Ad Board’s website from “sufficient independent corroboration” to “supporting information.”

The OCR affirmed the legality of Harvard’s policy on April 1, although CASV members claimed that the OCR only ruled in Harvard’s favor because of the quiet change in the policy’s wording.

Wendy R. Murphy, the attorney for the complainant in the OCR case, said that the changed language widened the scope of those who can initiate disciplinary proceedings to those who share their experience verbally but do not have supporting evidence.

“[The victim] gets all the bells and whistles, which is dramatically different from what [a victim] got a year ago,” Murphy said.

The Leaning Committee released its findings on April 17 of this year, and the recommendations contained in the report held potentially far-reaching changes for Harvard’s sexual assault policy.

The report recommended the creation of a new office for Sexual Assault Prevention and Response, staffed by a director, an education specialist and a part-time staffer to run educational programs for male students.

The Leaning Committee also advocated the creation of educational programs in the upperclass Houses, and further suggested that one entire night of programming during first-year orientation week be devoted to sexual assault.

The committee also recommended the expansion of the single fact finder’s role in Ad Board cases.

The Leaning Committee proposed that the fact finder, intended to be a neutral investigator, be responsible for gathering evidence in every sexual assault case that comes before the board—essentially ensuring that no case is ignored.

And while disciplinary procedures were not part of the committee’s original mandate, members of the Leaning Committee nonetheless said that they felt disciplinary mechanisms are tied too closely to education and resources. In addition to recommending a single fact finder, the committee recommended that Ad Board members receive more training on handling peer disputes.

The committee helped to repair an atmosphere of trust and cooperation between students and faculty that had been shaken the previous spring.

“In a sense there had been a chasm that was unbridgeable [between students and faculty],” said Professor of the History of Science Everett I. Mendelsohn, a member of the Leaning Committee, at the May 6 Faculty meeting. “That has begun to change.”

“It was an excellent report. It gives us some concrete steps we can really take,” said Dean of Undergraduate Education Benedict H. Gross ’71, who will assume the role of dean of the College in July, at an open forum to discuss the committee’s findings.

And at the May Faculty meeting, University President Lawrence H. Summers, who has sparred with student advocacy groups in the past, thanked the student activists for bringing the issue of sexual assault to the University’s attention.

Students, too, lauded the report’s findings on education and support, but said they continue to worry about the how victims are treated throughout the disciplinary process.

“The office has material and symbolic consequences,” said Alexandera Neuhaus-Follini ’04-’06, a CASV member, at the time of the report’s release. “Hopefully it will really translate into survivors having better experiences, and be part of a larger cultural shift.”

And the a new sexual assault policy, approved by the Faculty on May 20, requires students involved in these cases to provide “as much information as possible to support their allegations.”

While student activists say they see the changed wording—and the University’s commitment to using the single fact finder—as positive steps, they say they are suspicious of any evidentiary requirement for cases to be brought forward.

“CASV still believes that requiring corroboration, no matter what it is called, is bad and prevents survivors from coming forward,” Alisha C. Johnson ’04, a member of CASV, said in April.

CASV members continue to call for a committee to review more thoroughly the  Ad Board and discipline in general.

Still, students said they hope that the full implementation of the Leaning Committee’s report means they won’t have to rally again.

“In May of 2004 I hope that I won’t have to be standing here,” said CASV member Madeleine S. Elfenbein, who spoke at both this year’s and last year’s rallies. “Its been a year of leaps and bounds.”

—Staff writer Sarah M. Seltzer can be reached at sseltzer@fas.harvard.edu.