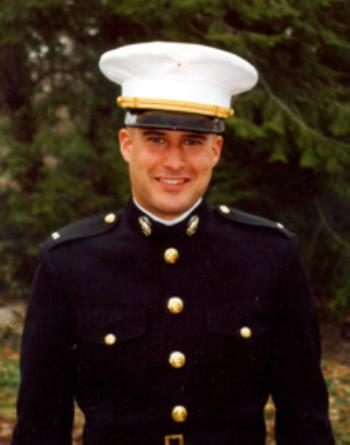 When Seth W. Moulton '01 stepped onto the podium to deliver the Undergraduate English Oration at his Commencement, he called upon his classmates to live a life of service.

“We enter Harvard Yard through Dexter Gate, whose inscription enjoins us to ‘Grow in Wisdom.’ But few seem to notice the invocation as we leave. To our world of individualism, it speaks of solidarity and unity of purpose. It says this: ‘Depart to serve better thy country and thy kind,’” Moulton told his class.

Two years later, Moulton—now stationed in Iraq as a second lieutenant in the Marine Corps—is heeding his own advice.

Moulton’s friends at Harvard said that he had an interest in the military during his years at the College, and his mentor—Plummer Professor of Christian Morals Peter J. Gomes—said that they had long talks on service and the military, and that Moulton was determined to give back to his country.

“His Commencement talk is a perfect encapsulement of the person he is,” Gomes said. “The rest of his life will be spent living the implications of what he said.”

Moulton’s mother, Lynn Moulton, said that her son spent the summer after graduation at home in Marblehead, Mass. before entering Officer Candidate School—partly in order to avoid undergoing basic training in the summer heat and partly in order to convince his parents that joining the Marines was a good idea.

Lynn Moulton said she was surprised with her son’s post-graduation plans, adding that his announcement “crushed” her.

Following his graduation from Officer Candidate School, the newly-minted officer was assigned to the First Marine Division, based at Camp Pendleton in San Diego, Calif.

He shipped out to the Persian Gulf with his division in January.

“Just try to be proud of what I’m doing and not worry. I’m not really worried much at all. I don’t expect it to be a lot of fun, but it’s an important job,” Moulton wrote in a letter to his brother Cy Moulton—a student at Bowdoin College—during the 40-day voyage to Kuwait.

On station in the Gulf, Moulton said that living conditions have been austere at best. In an e-mail to The Crimson, he said that in addition to the 115 degree heat and the omnipresent mosquitoes and flies—at times during the war he and his platoon received only one meal a day, and were only able to shower once every three weeks.

Moulton said in the e-mail that he has a precious bag of dried fruit that he is unwilling to give up, even though it is infested with ants.

But Moulton said he and his Marines have endured these hardships well, and are able to laugh about the experiences afterward.

“If you could see what great guys they are, as I can, you would give them all the respect in the world,” Moulton wrote in the letter to his brother. “All of these young kids are...facing challenges, fears and experiences most people on the home front could not even comprehend.”

He also asked his brother to support all soldiers—regardless of what he thinks of U.S. foreign policy.

When the coalition invaded Iraq in late March, Moulton’s unit was on the front lines.

“There’s really nothing in life quite like getting shot at. Still, most of us got used to it,” Moulton wrote in the e-mail.

In Marblehead, the entire community kept electric candles on in its windows to show its support for Moulton and his family.

Debbie Dusenberry, the first neighbor to turn on a candle, said that the candles were not put up as a statement of anyone’s stance on the war but rather as “a hope that Seth would come back home and that peace would be restored.”

As coalition forces pushed deeper into Iraq, Moulton said his unit was in the vanguard of the final push into Baghdad.

“I was in the first company of Marines to enter Baghdad, and once most of the fighting was over, our biggest problem with running patrols was the huge mobs of cheering supporters who would always crowd our vehicles,” he wrote in the e-mail.

But even with the military phase of the campaign at an end, Moulton said that life for him and his Marines remains far from tranquil.

“There’s shooting every night, most of it celebratory. If there’s quite a bit of gunfire, we run towards it, not away, since that’s our job. But at least it keeps things interesting,” wrote Moulton, who added that his unit is now based south of Baghdad in the town of Al Hillah.

Moulton added that his Marines have faced little of the unrest among the Iraqi people that has plagued the Baghdad garrison.

Moulton wrote in the e-mail that he is not sure when he will be coming home, but he said that he hopes that it will be “within the next month.”

Lynn Moulton said that although she had planned to keep her candles on only until Seth returned to the United States, she will keep hers in the windows until he comes home to Marblehead and see them lit.