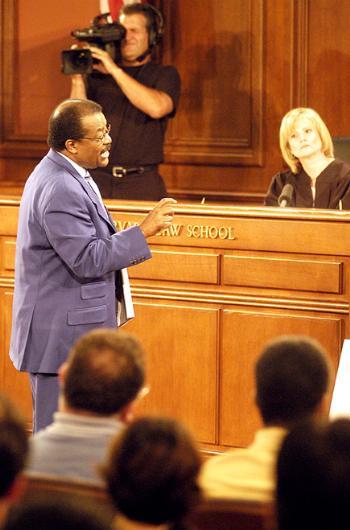 Baseball justice was handed out yesterday, Harvard-style, when a mock trial conducted by ESPN in the halls of Harvard Law School concluded that checkered legend Pete Rose should be admitted into the Baseball Hall of Fame.

Austin Hall’s Ames moot courtroom was converted into a television set as pre-eminent criminal defense lawyers Johnnie Cochran and Frankfurter Professor of Law Alan M. Dershowitz spent an afternoon and evening addressing a jury of 12, an in-person crowd of around 200 and a nationwide broadcast audience of millions.

Dershowitz made a pointedly rational case that Rose—who holds the all-time record for career hits, singles, at-bats and games played—should remain barred from the Hall as a result of alleged bets placed on the Cincinnati Reds while Rose was that team’s manager. Cochran, by contrast, prevailed after appealing largely to emotions in his defense of the three-time World Series champion’s right to enter the ballot for the Hall of Fame despite an agreement signed in 1990 permanently banning him from taking part in Major League Baseball.

At 11 p.m., the jury delivered an 8-4 verdict declaring that Rose should join the Hall, though all but one of the jurors said they thought Rose had, in fact, gambled on baseball.

Three hours of testimony earlier in the day—with the two lawyers trading questions and ripostes with witnesses including learned baseball fans, former professional players and two experts on compulsive gambling addictions—had given abundant proof that Rose’s was not an open-and-shut case.

“It’s a perfectly difficult question, because there’s not even any debate about whether otherwise he’d be admitted,” Jeffrey R. Toobin ’82 told The Crimson while waiting for the verdict last night. Toobin, who is also a Crimson editor, served as a commentator for the ESPN broadcast.

But many said that his historic baseball achievements—which, several witnesses vouched, would be more than enough to guarantee a place in the Cooperstown, N.Y. Hall—could not distract from the allegation that Rose violated a supreme rule of the game by betting on his own sport and team.

“Baseball is a game of rules,” Dershowitz said during his opening remarks. And perhaps the most important of those rules, he said, was “Thou shalt not bet on baseball—and especially not on a game in which you have a duty.”

As camera crews made final adjustments and microphones were nudged—and the courtroom’s large clock set forward to read 7 p.m. so that the taped first portion of the broadcast would appear to be live that evening—Dershowitz paced the courtroom floor a few minutes before the trial’s actual 2 p.m. start. Looking lost in intense thought at times and grinning boyishly at others, he set the tone for the afternoon and evening’s events: a very serious scrutiny of a recreational pastime, a prosecution for crimes against fun.

Before long, a gruff bailiff was growling for all to rise, Catherine Crier—who is a legal television personality but returned yesterday to her original career as a judge—was calling the court into session, and the attorneys were launching into spirited opening statements. And their high rhetoric and stylized questioning was soon matched by lively testimony from colorful witnesses who were often as famous as the man being “prosecuted.”

Among the witnesses marshalled by Cochran for the defense was Hank Aaron, the former Atlanta Brave who unseated Babe Ruth as the player with the most career home runs in 1974.

Aaron sidestepped Dershowitz’s evidentiary presentation of a pattern of illicit gambling, instead choosing to focus on Rose’s accomplishments as a player.

“I don’t know what he did off the field,” Aaron said in a previously- exchange. “I’m going by his record, what he stood for for 24 years...He was very dangerous—he was the complete player.”

Former Red Sox pitcher Bill Lee also said Rose’s skill on the baseball diamond outweighed any dishonor he may have incurred by gambling.

“He’s a pain in the ass, but the greatest two-strike hitter in the game,” said Lee.

And Toobin recalled being floored by Rose’s skill as a child.

“Pete Rose may have a lifetime .300 batting average, but it seemed like when we watched he had about a .700 average,” Toobin said.

But Cochran’s argument included more than hagiography for the superhuman batter.

Central to the argument for the defense was Cochran’s insistence that the 1990 agreement between Rose and then-Baseball Commissioner A. Bartlett Giamatti had only barred Rose from Hall of Fame consideration for a single year, though prohibiting him from playing, managing or otherwise being involved in major league games for all eternity.

Cochran charged that the current rule, under which Rose and the others on baseball’s permanent ineligibility list are also permanently banned from the Hall, had been instituted by a spiteful new Commissioner after the fact specifically to block Rose.

Dershowitz, however, said the 1991 rule change was merely a formality, citing the case of “Shoeless” Joe Jackson, a renowned Chicago player placed on the ineligible list after throwing the 1919 World Series in cooperation with bookies. Dershowitz said—and his witnesses agreed—that “Shoeless” Joe might easily have made the Hall of Fame had not his place on the ineligible list been interpreted for decades as a disqualification.

And Dershowitz put definitional quibbles aside to look at the specifics of Rose’s case, coaxing his witnesses to go beyond numerous avowals of gambling as baseball’s ultimate taboo. He supplemented such philosophical arguments with a repeated reliance on the findings of the Dowd Report—a voluminous 1989 work documenting in great detail the results of an official Major League Baseball investigation into Rose’s gambling.

At least one Cochran witness, though, had no time for the Dowd Report and its supposed evidence.

Bill James—the chief proponent of sabermetrics, a school of baseball thought based on refined statistical analysis and stubborn opposition to anything as clumsy as common sense taking its place—authored a scathing rebuke to the Dowd Report shortly after its publication, claiming to expose it as a sham. James repeated those claims yesterday.

But in return he faced the sudden wrath of Dershowitz, who hounded James with factual inconsistencies and inaccuracies he said he had found in the book, calling it “a serious mistake.”

The previously cool Dershowitz appeared on the point of losing his temper while cross-examining James, approaching him closely and waving his finger while shouting such sentences as “You made it up!” and “You’re wrong—admit it!”

Though James did seem to grow flustered at the time, he collected himself before making his reply.

“I’m certain I have made mistakes,” James said. “I do not believe this is one of them.”

In his new position as top advisor to the Red Sox, the long-time outsider has been notably responsible for the thus-yet disastrous “closer by committee” system, in which the Sox have no permanent closers in their stable of pitchers.

Toobin told The Crimson he admired Dershowitz’s technique in this exchange, which came towards the end of witness testimony.

“I thought Dershowitz was clever in how he picked only one witness to go after in an extremely aggressive way,” he said, describing James as “completely thrown” by the assault.

Other memorable witnesses included Dan Shaughnessy, a sports writer for The Boston Globe, who echoed many in saying he thought Rose would easily be admitted to the Hall of Fame if only he admitted to gambling on baseball and apologized.

In the absence of such public confessions, Shaughnessy said, he would continue to believe that Rose “loved betting more than he loved baseball.”

And such an affection, said Shaughnessy, is a high offense indeed—worse than other moral failings which Hall-of-Famers have flagrantly displayed.

“A sin against baseball is different than how you treat your family or holding up a bank,” he said.

Lee laughed off such sanctimonious pronouncements about the evil of gambling.

“I don’t think it is the offense it’s cracked up to be,” he said, flippantly suggesting that betting on baseball might be better punished by “go[ing] to Las Vegas for two weeks.”

And James, too, said he did not feel Rose’s alleged bets were apocalyptic events for the national pastime.

“Baseball would survive the admittance of Pete Rose to the Hall of Fame,” he said.

Earlier, former Dodgers first-baseman Steve Garvey said that no matter how serious, Rose’s putative sins might have vanished instantly had he only made a public apology in 1989.

“We really want to forgive him,” he said.

As Cochran edged into confrontational statements rather than simple questions during Garvey’s cross-examination, he met with a sternly-administered rebuke from Crier—an admonition which seemed to embolden Garvey.

When Cochran resumed his cross-examination in a little-changed fashion, Garvey interjected, “You’re very informative, Mr. Cochran,” drawing a laugh from the crowd.

“Well, I want to be,” the defense lawyer was heard to retort.

Dershowitz put all his energy into his closing argument to the jurors, deriding Cochran’s case as “a multiple choice defense.”

He portrayed Cochran as desperately hopping between two arguments, both destined to fail—attempting, on the one hand, to convince the jury that Rose did not bet on baseball, and simultaneously to make them sure that any such gambling would not be cause to bar him from the Hall of Fame.

Dershowitz portrayed himself, by contrast, as a champion of calm evidence, saying the weight of the Dowd Report meant the jury would have to believe in “a vast, vast conspiracy” to conclude that Rose had not gambled on the Reds.

Speaking of a particular stub filled out with handwriting which analysts have identified as Rose’s, he said, “it’s not a laundry list, it’s not a grocery list, it’s a list that shows bets he placed.”

He finally resorted to a mimicry of Cochran’s famed rhyming defense arguments, showing a wide grin and apologizing to his opponent counsel in advance.

“If you bet on the game, there’s no Hall of Fame,” Dershowitz said .

But Cochran prevailed with what Toobin called a uniquely persuasive argument: “enough is enough,” he repeated several times in his closing argument.

“This holier than thou attitude baseball has—it’s rife with hypocrisy!” he exclaimed, citing Rose’s legendary status and the private missteps of other great players.

“You would not keep Vincent Van Gogh out of the Louvre because he had a drug and alcohol problem,” Cochran said.

In the end, the jurors agreed. Hank Aaron seemed to have spoken for all of them with an emphatic statement about Rose during testimony earlier in the day.

“There’s no question about it,” Aaron said. “He’s been punished enough.”

—David H. Gellis contributed to the reporting of this story.