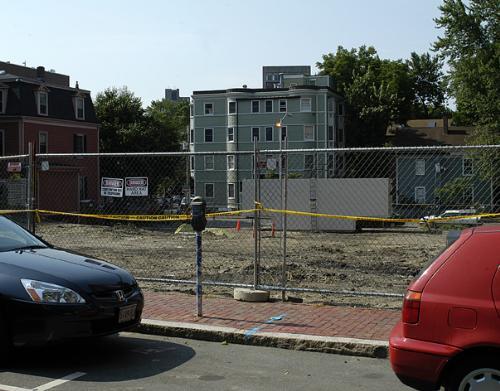 The parking lot that once occupied the plot of land at the intersection of Arrow Street and Mass. Ave. has been torn up and transformed into a construction site in preparation for the building f the new Market Theater, funded by philanthropist and 19
By Laura L. Krug, Crimson Staff Writer

Groundbreaking began this month on a vacant parking lot at Zero Arrow Street, in preparation for building the new Market Theater, which used to make its home on John F. Kennedy Street.

The Market is the brainchild of Gregory C. Carr, a philanthropist and 1986 graduate of the Kennedy School of Government (KSG). Carr is the namesake of the Carr Center for Human Rights at the KSG and the funder of a radio station in Kandahar, Afghanistan.

Though it filled a gap in performing arts venues in Cambridge, the theater’s previous incarnation lasted less than a year, when Carr decided to lease the space to a restaurant—Upstairs on the Square—to make way for construction a newer, larger Market.

Plans for the interior design of the new building are not yet complete, Carr said, and have changed numerous times after community opposition prevented his initial plans from going through.

“We are contemplating the performance space as flexible seating, flexible stage placement, which will give directors more choices,” he wrote in an e-mail. “There may be more than one performance space in the building, there could be a larger space and a smaller space. Or at a minimum, the second space could be for rehearsal.”

The theater will also provide office space for non-profit organizations, and Carr said there is still some space left for any groups that are interested.

Harvard administrators are cautiously hopeful that the new theater Carr is building might prove a partial solution to the College’s perennial space crunch. Robert Orchard, executive director of the American Repertory Theater (ART), said the ART and Carr have discussed possibilities for months.

“We’re working on what I hope will be a suitable arrangement,” Orchard said. “In particular, I’m looking for a second smaller, more intimate performance venue to replace the Hasty Pudding Theater, where the ART has actively for 20 years been developing new work. And I’m looking to replace the central rehearsal facility for the ART, which is currently in the basement of the Unitariam church. I can’t say that I’m going to succeed in either of these, but I’m very hopeful. I think we have a reasonable chance.”

Carr has proposed the possibility of renting a portion of the building to the College as a dance space to administrators. The College is scrambling to find a replacement for the Rieman Center for Performing Arts, which will be overtaken by the Radcliffe Institute in two years.

“I do hope that [the Faculty of Arts and Sciences[ will also make use of the building but that decision is up to them,” said Carr.

College administrators—though they say they are seriously considering Carr’s building—have said they would likely prefer to own rather than rent a space from year to year, and a strained relationship between the College and the ART in the Loeb Drama Center may make second venue of collaboration less desirable.

Dean of the College Benedict H. Gross ’71 has said that he hopes to announce a final plan for a replacement dance space in the fall.

The beginning of the construction has been delayed by several months as the city agonized over granting it the necessary permits, and neighbors raised concerns about the car traffic, garbage, noise and light pollution that such a project might introduce to the area. Carr’s plans no longer include a restaurant for patrons, and the number of seats will likely be smaller than in his initial designs.

But the permits have been obtained and some Cambridge residents, if not completely satisfied, are less concerned than they have been in past months.

“They have made some modificatons that were important,” said Merritt Harrison, who lives on Remington Street and opposed Carr’s plans at several city meetings. “I don’t think that there’s going to be a restaurant attached and that will cut own on garbage pickup and that type of thing.”

And Harrison said he hopes the theater won’t lead to garish displays.

“We don’t want any large electrical signs around the neighborhood, that’s for sure,” he said.

Carr said he has gotten positive response from would-be neightbors of the theater in more recent months.

“I believe the community is supportive and enthusiastic about the advent of another arts center in the area,” he said.

—J. Hale Russell contributed to the reporting of this story.