First-years kick off their academic careers 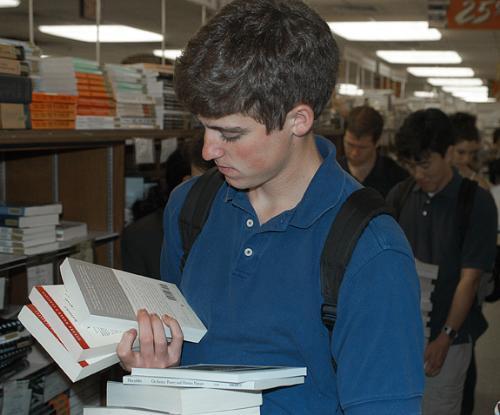 Shopping period began early yesterday for Scott M. Richardson ’07 and the other residents of Canaday C-11 as they rolled out of their beds and into their first experience of academic life at Harvard.

Richardson and his three roommates were joined by roughly 1,600 members of the Class of 2007 rushing in and out of the Yard’s classrooms, reacting with excitement, trepidation and awe as they were hectically introduced to what will be the daily rhythm of their next four years.

They tested out shopping-period strategies, tried not to get lost in the Science Center-Sanders Theatre hustle and did their best to keep up with the frenzied pace of the first day of classes.

Richardson’s Harvard career began at 9:10 a.m., after just one run-in with his alarm clock’s snooze button. He stopped off for a quick Annenberg breakfast before making his way to Science Center D for Quantitative Reasoning 28, “The Magic of Numbers”—the humanities or social science specialists’ perennial favorite.

“[Harris] seemed to be really energetic and into his class,” Richardson said after spending an hour watching the chair of the Mathematics department enthusiastically explain arithmetic, geometric and Fibonacci series. “I think he did a really good job of not going too fast and making sure people understood.”

Richardson’s rapt attention to the lecture was interrupted around 10:20 a.m. when he committed his first lecture hall faux pas—leaving one’s cell phone on in class. He swiftly silenced his phone when it began blaring a trebly version of the theme from The Godfather.

And as much as he enjoyed Harris’ lecture, Richardson said he had attended the class more as an insurance policy than anything else, shopping his way through a field of possible Core courses he planned to visit over the rest of the week.

“It’s more of an option in case the science classes bomb,” the newfound shopping period afficionado said. “There’s no drawback to just wandering into a class here and hearing what the professor said.”

Richardson was more committed to the next two classes he stopped by— Government 10, “Introduction to Political Thought,” and History 10a, “Western Societies, Politics, and Cultures: From Antiquity to 1650.” He said he was likely to register for both courses, as they entertained him with lively lectures and interesting subject matter, though he held out the possibility that he would fall in love with Government 20, “Introduction to Comparative Politics,” when he shops it today.

In all three of yesterday’s shopped courses, Richardson—who was one of a graduating class of 84 at a small private day school near Washington, D.C.—came to grips with the “huge” size of some lecture classes at Harvard.

“It was a little bit overwhelming,” he said. “Some of those classes had more kids in them than my entire class at school.”

Richardson said he worried that he would lose the close contact he had enjoyed with his high school teachers.

“This is all a one-way conversation,” he said. “It is more distant...Not that I’m going to fall asleep in class, but it is going to make it easier. You fall asleep in a class of 12 people, they’re going to notice.”

Richardson’s three roommates all got their own chance to see an oversized Harvard lecture course when they squeezed into a packed Sanders Theatre to shop Social Analysis 10, “Principles of Economics” (Ec 10).

Roommate John M. Cosgrove Jr. ’07 said he had met a flood of students leaving the ornate hall at noon as the previous class adjourned.

“It was like controlled chaos,” he said with a laugh. “Nobody was violent or anything.”

Evan R. Calvert ’07, another Canaday C-11 resident who said his average class in high school had 20 to 25 students, appreciated the auditorium’s architecture.

“I couldn’t believe the classroom when I walked into it,” he said.

But Calvert expressed anxiety about the size of this and other classes.

“I think that’s going to be my biggest shock—not having so much one-on-one contact with my professors,” he said.

By contrast, Dylan P. Reese ’07—the hockey defenseman recently drafted by the New York Rangers—said that with a nearly-full slate of seminar-style courses ahead this term, he welcomed Ec 10’s larger scale.

“That’ll be good also to have some variety,” he said. “I love that environment—Sanders Theatre’s a great, old-time place to learn.”

Jamila R. Martin ’07, a friend of Richardson’s, said she, too, had enjoyed the impersonal approach of the introductory economics class.

“I like the idea of just being able to sit there,” she said. “I love the idea of lectures where you can sit there and take notes and just have it given to you.”

While Richardson made the most of shopping period’s free-form nature yesterday, visiting some courses that he had no definite plans to enroll in, one of his roommates avoided such haphazard scheduling.

“I don’t think I went through the same hectic experience as other people did,” Calvert said, explaining that he had armed himself with a Courses of Instruction book and more or less settled on his fall courses the night before. “I could pay attention in the classes and not be worrying about which ones I was going to go to in 30 seconds.”

Reese, on the other hand, lauded shopping period’s flexibility and said he didn’t think it had added too much stress to his life.

“I think it was a really calm experience,” he said. “Even sitting in a one-hour class or a half-hour class can really tell you a lot about what the class is going to be like.”