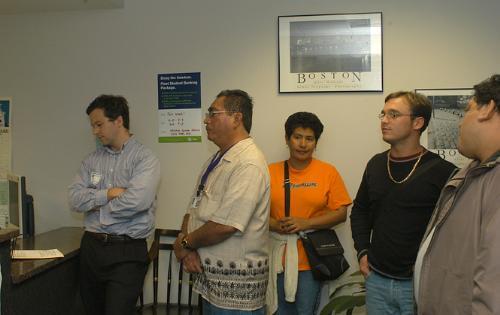 The union representing Harvard’s janitors escalated its battle Friday to force the University to provide its members advance vacation pay—a practice that ceased with the implementation of the new PeopleSoft payroll system last September.

The union, Service Employees International Union (SEIU) Local 615, filed a complaint with the National Labor Relations Board, and nine members presented a copy of the complaint in person at the payroll office in the Holyoke Center.

The new method of payment is causing trouble for cash-strapped Harvard employees who may need the money in order to take vacations at all, one union official said Friday.

“Workers are experiencing unacceptable delays with vacation time,” said Aaron Bartley, an organizer for SEIU Local 254—the Cambridge chapter of the union. “Our only recourse at this point is to file this charge.”

Bartley estimated that between 40 and 50 of the 300 workers under contract have faced problems getting their vacation pay.

According to Marilyn D. Touborg, director of communications for Harvard’s Office of Human Resources, the change in the pay schedule came about as a direct result of last fall’s technological update.

“The new PeopleSoft payroll system makes it very difficult and cumbersome to process pay advances and the practice was discontinued as a result,” she said.

While acknowledging the difficulties with the new system, Bartley said he felt the technical issues regarding PeopleSoft should not come between workers and their checks.

“It’s just a matter of having to put resources in to fix the problem,” he said. “Our intent is to push it up on their priorities.”

The union has been fighting for several months to secure vacation pay for its workers before they actually take time off, a right which it claims is stipulated in the janitors’ contract with Harvard.

The contract reads, “Employees shall be eligible to use accrued vacation upon accrual.”

In its complaint, the union argues that Harvard had effected “unilateral change of term of employment” by “curtail[ing] employee vacation benefits in violation of contract and practice, thereby constituting refusal to bargain.”

Bartley said workers have been experiencing problems getting early pay since June and that the union has been told continuously that a solution is in the works, but he said they have seen no results.

Touborg said the University is working on smoothing out the issue and is “disappointed” that the union filed a complaint against the school.

“Harvard has been in ongoing conversations with SEIU to find a remedy for those custodians who were impacted by this change and those conversations will continue,” she said.

—Simon W. Vozick-Levinson contributed to the reporting of this story.