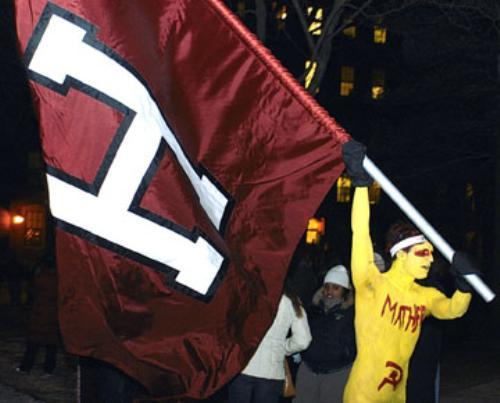 Hunter A. Maats ’04, coated in war paint, runs naked through the Yard Saturday at midnight in Primal Scream. Around a hundred students stripped and carried on the pre-exam period tradition despite the freezing cold.
By Nicole B. Urken, CRIMSON STAFF WRITER

Braving sub-zero wind chills that threatened to turn Primal Scream into Primal Whimper, around 100 stripped and shivering students made their tradition-inspired dash around the Yard last Friday night.

There were no major casualties in the event, which students ran with the mercury hanging around 13 degrees and a windchill of -7 degrees.

According to University Health Services (UHS), there were no cases of frostbite or alcohol sickness reported Friday night, though at least one student was diagnosed with frostbite later in the weekend.

While many students ran fully nude after throwing off bathrobes and towels, some students took their barely-there costumes seriously.

Drums and horns provided booming spirit amidst students’ cries. While runner participation was slightly lower than most years, the Yard was still packed with spectators.

Members of the women’s varsity hockey team ran in their uniforms, albeit slightly more revealing than the standard pads and masks.

Running props were popular this year as well, with students toting a shopping cart, a surf board and a banjo.

Undergraduate Council representatives stood outside of the Matthews and Straus common rooms to swipe students in so that students could thaw and dress.

Many upperclass students made the trek over to the Yard, including the boisterous members of Mather House who held a “war rally” against Kirkland House as the opening salvo in their recently declared “House war.”

With the Soviet national anthem playing in the background, Matherites draped a two-story-high House banner from Matthews while four members stood wearing only jackets.

Mather residents claim Kirkland residents are behind the disappearance of the Adams House gong and letters threatening to send the gong to the Russian monastery that has been seeking the Lowell bells.

“We Matherites have real House pride and are not afraid to demonstrate,” Daren S. Morris ’05 said.

For others, the mere survival of their extremities through the frigid run was enough cause for celebration.

Nathan J. Dern ’07 visited UHS on Sunday to find that he had suffered from first and second degree burns on eight of his toes.

Dern said he thought his naked jaunt outside for about 35 minutes and two of his four laps around the Yard without shoes probably contributed to his condition.

Despite the blisters and bandages, Dern said that he did not regret the experience.

“Without rival, it was the greatest night of my life,” he said. “I’m planning on doing seven more.”

Dern said that his only regret was that he was outdone by three students who had streaked through Annenberg earlier in the evening.