Banks Cash In On Square 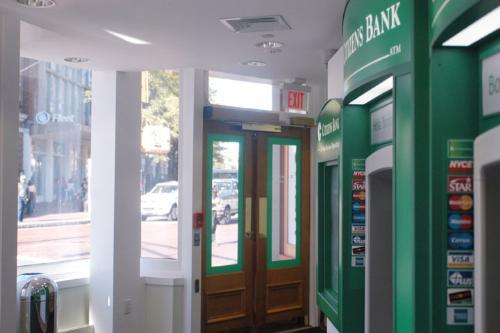 There’s all kinds of change in the air around Harvard Square these days, with the opening of two more bank branches.

In an attempt to cash in on the Square’s bustling student population and heavy foot traffic, Citizens Bank and Sovereign Bank will open branches this year in prime commercial storefronts.

This move brings the banks to the brink of ubiquity and has caused some Square businessmen to worry.

For the two chains, it’s an attempt

to go where their customers go.

“Ten years ago [people expected] that online banking would take things over and people wouldn’t need banks,” said Barbara Cox, the marketing director for Cambridge Savings Bank, which has its headquarters in the Square. “That has not been true.”

“If you read any industry journal there has been a large expansion in brick and mortar [locations],” she said.

The Square will be home to eight banks—Sovereign, Citizens, Cambridge Trust, Wainwright, Harvard University Employees Credit Union, and Fleet, soon to be Bank of America.

Forty ATMs will cluster in the two-block area of the Square bound by Church St., Mt. Auburn St., Mass. Ave., and Plympton St.

The banks are all running after student accounts because they offer the lucrative opportunity potential for life-long customers.

“Our goal is to grow with you,” said Ronald L. Walker II, the executive vice president of consumer banking at Sovereign Bank. “[You] can move right to the elite checking account.”

David Connell, the regional manager for Citizens said that the number of tourists in the Square would enable so many banks to survive in such close-quarters.

“That four mile radius attracts 2.5 million tourists annually. [It] has the highest concentration of graduate students. [There] are 375 small businesses,” he said.

But several local business leaders have expressed concern that prime commercial real estate is being grabbed by businesses that will be open for only limited hours.

“It is unfortunate not to have key marquee retail spaces with a use that would be open the majority of day and night and week-ends,” said John DiGiovanni, president of Trinity Properties, which owns the Garage. “You want to have retail life at signature corners.”

But DiGiovanni reasoned that if the Square could not support the banks they would close.

“Things change over a [long] period of time,” said DiGiovanni, who is also the president of the Harvard Square Business Association. “At the end of the day the consumer will choose what stays and what goes.”

Representatives of two long-time denizens of the Square—Cambridge Trust and Cambridge Savings—said that they were unconcerned with competition from the new Sovereign and Citizens.

It was not Cambridge Savings’ idea, however, to have a competitor move in.

When Abercrombie & Fitch moved out, it transferred the remainder of its lease to Citizens.

“Everything took place between those two organizations,” Cox said.

Robin Lapidus, the executive director of the Harvard Square Business Association said the glut of banks was just a sign of the times.

“People expect [the Square] to be a Williamsburg, Virginia,” Lapidus said. “[But] it’s America and it’s capitalism — what are you going to do?”