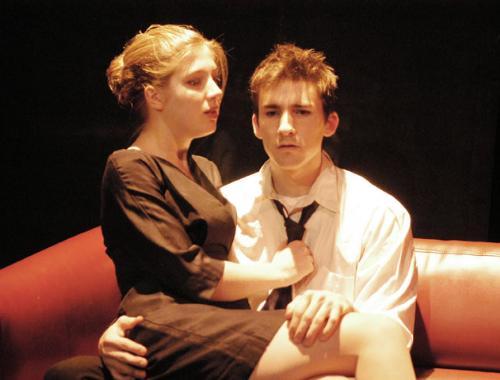 Sarah E. Curtis ’05 as the mistress Ceasonia fraternizes with Jess R. Burkle ’05 as Caligula in Albert Camus’ Caligula at the Loeb Ex Theater.
By Rebecca M. Harrington, On Theater

In Caligula, one of Camus’ most unremittingly existentialist plays, gore and death are so paramount that they lose their meaning. Caligula inhabits a world that is relentlessly bleak. Within this delicately articulated universe, the charcters become stringently allegorical, and the play becomes increasingly hard to infuse with humanity.

Director Ben D. Margo ’05 and cast have tried to instill new life in Caligula by placing it in a modern office and adding copious ‘80s-inspired dance numbers. Although this is very interesting aesthetically, the play seems to lose a bit of its original intent. Margo seems unable to decide whether he wants to satirize Caligula, or make it horribly profound.

Caligula takes place in the world of ancient Rome. After the death of his beloved sister Drusilla, Caligula (Jess R. Burkle ’06), the King of Rome, is cast into total and complete despair. After wandering about his kingdom for three days, he finally returns as a different man, with the realization that human life has no true meaning. This inspires Caligula to go on an indiscriminate killing spree, much to chagrin of his senators, who for the most part are too weak to say anything to him. After killing all those most dear to him, including his mistress Ceasonia (Sarah E. Curtis ’05), Caligula begins to contrive his own demise at the hands of his cabinet.

The concept that Margo seems to be working with is some type of Wall Street take off, in which everyone strides around in a power suit and pours coffee from the sidebar. Aesthetically, this definitely works—the set and lighting are both excellent. The office is scrupulously represented, replete with fake trees and a leather anteroom and the costumes are great—powersuits never looked so good. In conjunction with this theme, there are a number of 80s-inspired dance numbers which are funny if a bit at odds with the rest of the plot.

The acting ranged quite a bit within the cast, but was characterized by gusto and enthusiasm. Burkle is excellent, playing Caligula as a sort of maniacal Holden Caulfied. He is extremely skilled at laughing like he is completely insane. He had to beat himself up about 12 times during the play and he did so with an unabashed physicality that was truly awe-inspiring. Mike B. Hoagland ’06, who played senator Cherea, was also good as a man bent on destroying what he sees as the embodiment of evil. Curtis, the mistress, is a little anemic, but has strong moments of charcterization.

The main problem with the play is that it has a hard time deciding what it wants to be and sustaining interest. Though punctuated by arresting acting and interesting (if unexplained and totally unnecessary) dance numbers, the language of the play is extremely stilted (it’s translated from french), and can lead to particularly long periods of montonous discussion. However, the actors deal favorably under these conditions, and ardor makes up for a multitude of sins.

By the end of the play, Caligula appears sympathetic, for he is a poor and truly lonely individual. Only the enthusiastic cast and strong aesthetics could inspire sensitivity toward such a monster.